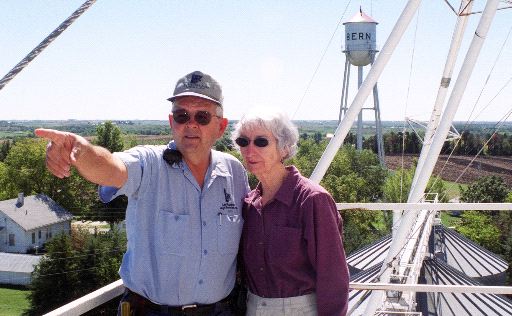 He heard the call

By Matt Moline
Special to The Capital-Journal

Caption: Gary and Betty Lortscher met 40 years ago in Africa. He was a member of the Peace Corp. She was a representative for the Canadian government. They married and returned to live in Bern, a small community of 200 in Nemaha County.

BERN, KANSAS -- "Life is calling. How far will you go?" So goes the timeless message for this year's Peace Corps recruitment campaign.

Forty years ago, Peace Corps service took Gary Lortscher, of Bern, to Africa, then back to Nemaha County, where the eternally optimistic grain elevator owner has maintained a global perspective of the world -- including his own hometown.

"For me, personally, I think I was too naive at the time to think I might get anything out of it. I wasn't sure I wanted to go back home and join dad's business, and I certainly didn't have any grandiose ideas about saving the world," Lortscher said. "And then President Kennedy started the Peace Corps. And it sounded like a new frontier, something interesting to do."


Matt Moline/Special to The Capital-Journal

Lortscher received notification that he had been accepted for Peace Corps training -- followed by a two-year stint in Guinea, West Africa -- while completing his undergraduate degree at Kansas State University in the summer of 1963.

"I went flying over to the library to look up Guinea," Lortscher said, "and there were so many countries that began with a 'G' -- Guyana and Guiana -- that I think I lumbered around for three weeks before I realized what country I was really going to."

In 1965, Lortscher took a job with the U.S. Agency for International Development, working as an agronomist in both Guinea and neighboring Nigeria until 1970.

While working at a Nigerian agricultural school, Lortscher met his future wife, Betty Smith, a Canada native who had been training elementary school teachers for the Canadian government in the village of Kabba, Nigeria.

The Lortschers married in Nigeria in the summer of 1968, then returned in 1971 to Bern, where the couple has lived ever since.

"The experiences we had in Africa have forever changed us," said Betty Lortscher. "Neither one of us takes a whole lot for granted anymore. We've seen situations where people had so little that we certainly now are more grateful in a way for the things we have in life, but also more humble in the sense that there's more to life than collecting 'stuff.' "

And for Gary Lortscher, the four-month Peace Corps training ordeal in New England will forever stand out, particularly the four-week crash course in French, experienced while living with a French-speaking-only family in Montreal.

"I remember getting on the bus leaving Montreal," Lortscher said. "Suddenly, it was like a light bulb going on. I started thinking in French. After that, I was so motivated I thought I could turn the world on its axis. And when I look at how we motivate people -- in my case, in our business, I keep thinking and using that as a yardstick."

The Lortschers are parents of two grown children, Brent Lortscher and Yvonne Krehbiel, both of whom live in Bern.

Matt Moline is a freelance writer in Manhattan. He can be reached at moline@networksplus.