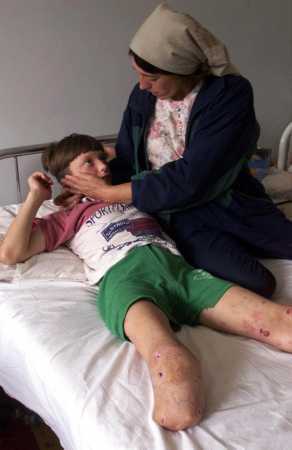 WAR IS NOT ACCEPTABLE IN GLOBAL VIEW OF WORLD

The most prominent symbol in the Oct. 6 rally and march against a war in Iraq was a large inflated globe. It floated through the streets of Seattle in a stream of humanity numbering in the thousands. I saw a lot of colleagues from the college where I teach and former classmates from graduate school at the University of Washington. It took me a while to figure out what we all had in common.

I'd gone there with Wendy and her husband, Nico. He served in the Turkish navy and merchant marine, which took him to ports of call in Africa, the Middle East and around the Mediterranean. Wendy taught in Turkey, speaks Turkish and has traveled to Thailand, Israel, Egypt, Morocco, Tunisia and Europe. They introduced me to Karen, who taught English in Japan for a year and has traveled in Thailand and Europe. I lived in Thailand for three years. I have traveled to more than 20 countries, mostly in the developing world. For more than 15 years, I've taught English to students from other countries.

My wife is named Atsuko.

We sat together on the damp grass in the amphitheater at Volunteer Park and listened to the speeches and the songs. After a while, I saw Michael and Kathleen. They are also community college teachers. They recently returned from a trip to Indonesia, Malaysia and Vietnam. They were with Brooke, a speech teacher who has spent six months in South America.

After the march got started, another colleague, Rob, spotted me in the crowd and fell in step. He teaches multicultural studies and advises the Asian-Pacific Islanders club at our college. As we marched down Pine Street, we ran into Beth, a former classmate who has just moved back to Seattle after spending a decade in Nicaragua teaching and working as a translator. We saw Allison, who teaches both ESL and Spanish. She has spent time in Puerto Rico. Her husband is from Spain.

We got down to Westlake Center where we had a good vantage of the crowd. Matt saw us and stopped by to say hello. He is a chemistry and environmental studies instructor, recently returned from a teach- abroad program in Costa Rica.

The children carrying the giant beach ball globe set it down below us. Someone pulled the plug on it and it slowly began to soften and collapse. Watching the Earth deflate, I thought about what had brought us all there. For one thing, we are all educators in institutions that are chronically underfunded. When we hear about a price tag of $100 billion to attack Iraq, it doesn't seem like a proper ordering of priorities.

But that isn't all we had in common. The people I ran into have traveled in developing countries. Something happens when you travel. You see that most of the people in the world get by on far less than a typical American. You realize that in America we take our blessings for granted.

What we enjoy as Americans is not all the fruit of our virtues. It is in large measure due to the accident of our birth. Yet we lord it over the rest of the world as if we've earned what we have. Conversely, the misery faced by billions of people is not deserved punishment for a lack of virtue. They are in proportion as kind and as generous as Americans. They didn't choose where they were born.

Travel can also give you the opportunity to see the effects of war firsthand. When I was a Peace Corps volunteer in Thailand, I visited Cambodian refugee camps. I spent time in Phnom Penh while there was still a civil war going on. In a prosthetics workshop there, I watched amputees fashion limbs for other amputees. In Vietnam, UXO (unexploded ordinance) left over from the Vietnam War continues to kill and maim. Agent Orange, another of our legacies there, continues to cause birth defects.

We don't have all the answers, but we who have lived in other countries, who have married spouses and taught students from abroad, we can say we know something that others don't. It is simply this: All the nameless, faceless brown and black people all over our collapsing globe are the same as us. They are as flawed as us, as noble, as worried about the future, as loved by their families.

When you really understand this, war becomes unacceptable.

This story has been posted in the following forums: : Headlines; Speaking Out; COS - Thailand