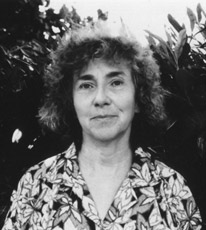 When Menlo Park author Nancy Farmer was invited to attend the 2002 National Book Awards event November 20 in New York City, she knew only that she was one of five finalists in the young people's literature category.

That night when she was announced the winner for her new book, "The House of the Scorpion" (Atheneum), the story of a feudal drug lord in the fictional country of Opium, one of the first things she did was call her husband at home in Menlo Park.

The award carries a prize of $10,000 plus a crystal sculpture.

Honors are nothing new for Mrs. Farmer, a resident of Menlo Park since 1992. She received Newbery Honor Awards in 1995 for "The Ear, the Eye and the Arm" and in 1997 for "A Girl Named Disaster," also a National Book Award finalist.

"I was so thrilled. This is very exciting, just sensational," says Kathleen Little, children's book buyer at Kepler's bookstore in Menlo Park, after learning of the award. "The House of the Scorpion," which came out in September, is "definitely for those 12 and up," says Ms. Little. "It takes place 100 years in the future and includes material about cloning and fetal implants."

Pat Lanyi, children's librarian at the Menlo Park Library, says there is already a wait list for "The House of the Scorpion," and that she has often recommended "The Ear, the Eye and the Arm" to young readers.

Nancy Farmer's own life reads like a novel. Born in Yuma, Arizona, she lived in a hotel owned by her parents, where guests included rodeo riders, retired railroad men, and the circus crowd.

"Life at the hotel was a wonderful preparation for writing," she said in a 1997 interview with the Almanac.

After graduating from Reed College, she joined the Peace Corps and went to India, where she taught chemistry for three years. In 1972 she went to Africa as a technician in entomology and biological control in Mozambique and Zimbabwe. She ended up staying for 17 years, marrying Harold Farmer, who taught English at the University of Zimbabwe.

She wrote her first short story at age 40, right about the time her son, Daniel, was born. She began writing textbooks, as part of a team, and novels for African children.

In 1987 the family moved to the United States. Mrs. Farmer received a National Endowment for the Arts grant in 1991-92.

"I became a full-time writer at this point, and have been ever since," she said in the 1997 interview.

"Writing has spoiled my ability to do anything else, but that's OK because it's so much fun," she said.

This story has been posted in the following forums: : Headlines; COS - India; Writing - India