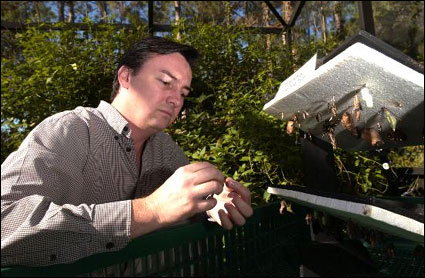 Caption: Michael Simonik, executive director of the Calusa Nature Center and Planetarium attaches pupa to a hatchery in the butterfly aviary. The aviary requires constant attention in order to keep the population of butterflies thriving. DANIEL BARRY/Special to news-press.com

Big and getting bigger Executive Director Michael Simonik, who has watched the number of visitors to the Calusa Nature Center double and triple, is now planning a massive rennovation.

By CATHY CHESTNUT, Special to The News-Press
Published by news-press.com on October 19, 2003

One of Michael Simonik’s pedigreed Australian shepherds keeps him company in his executive office, along with a bulletin board pinned with butterflies, a pupating luna moth, a beta fish suspended in its watery environs, and a terrarium of white peacock caterpillars just outside a sliding glass door.

Not a typical boss’s office, to be sure, but one suits the executive director of the Calusa Nature Center and Planetarium perfectly.

It’s a role the 38-year-old wildlife biologist has managed with aplomb since taking over the non-profit center in Fort Myers just two years ago.

In that short span, Simonik has seen doubled, then tripled, increases in the numbers of users and visitors —and coinciding whopping increases in revenue.

For example, summer camps generated about $20,000 last year, compared to $42,000 this year. “We have had an unbelievable year,” he says. “Whatever we do, it’s doubling and tripling.” (That’s despite the fact that general admission was raised from $4 to $7, though it now includes access to the planetarium.)

Simonik is like the gloating father of a newborn when he announces that last month, his center was voted the Best Nature Center in the state by readers of Florida Monthly Magazine. It was one of only three attractions in Southwest Florida to make the 142-category list.

Simonik attributes the center’s successes to a number of things: a boost in the number of full- and part-time staff members and interns, greater offerings of diverse programs and the opening of the new butterfly aviary and native plant nursery. The center and the surrounding landscaping also have been spruced up.

But for all the big changes that Simonik has helped to usher in, the biggest one still lies ahead: a $25 million renovation and expansion that aims to transform the quaint facility into an ambitious and impressive “living museum.”

As it stands, the center and planetarium — located on 105 acres of pine forest and cypress swamp — is home to a boardwalk and about 100 captive birds and animals, most of them injured and unable return to the wild. The built environment comprises about four acres.

The 10- to 15-year master plan calls for retrofitting the planetarium with a new Megadome theater system, redesigning the visitor’s center entrance and building 13 outdoor “galleries” reflecting habitats that stretch from Lake Okeechobee through the Caloosahatchee, and out to the Gulf of Mexico, such as cypress swamps, estuaries, dry and wet prairies and the like.

When it’s complete, visitors can explore a barrier reef complete with sharks and jellyfish, the den of a river otter splashing about cypress knees or injured manatees recuperating in large tanks.

The idea is to let visitors see how wildlife acts in its natural setting. And still, only a total of seven acres will be affected.

“If someone looked at a cypress swamp, it would be static. But if there’s an otter, they may actually learn about it,” Simonik says. “This will not be a museum of what was, but what is outside — a living museum.”

The money will come from donations, fundraisers and perhaps grants. The annual $550,000 budget is made up of less than one-percent government funding; the rest is through special events, admission, memberships, donations and programs.

Simonik doesn’t seem especially intimidated about kicking off such a sweeping capital campaign next year.

He is, after all, a former Peace Corps environmental educator in Morocco who has worked with a vast array of organizations over the years, most recently as vice president of environmental policy for the prestigious Conservancy of Southwest Florida.

It was his childhood trips to the Cleveland Zoo that first attracted him to animals and biology. At first, he was drawn to a career as a wildlife veterinarian and in high school, he became a junior naturalist at a wildlife center.

Because Simonik is a wildlife biologist first, and a policy analyst and advocate second, he is excited about another new change on the horizon. In June, the nature center’s 31-member board of trustees approved the center’s taking public positions on issues affecting the regional environment.

“We are an attraction for sure, but one with a mission: to immerse our visitors in a just few attributes of the natural world,” he says.

That way, “they can get excited about it and want to explore it even more and gain an understanding and appreciation for all things natural so they protect it.”

This story has been posted in the following forums: : Headlines; COS - Morocco; Nature Center; Biology