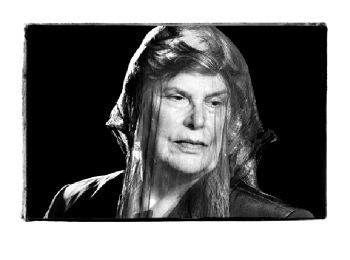 She stood silently in a grove of wind-twisted pines at the edge of San Francisco Bay in Emeryville with other members of Women in Black, a tall, foreboding puppet head perched on top of her own. She cast bread into the moving water of the Bay to signify the release of the past year's faults and misdeeds.

During this Jewish ritual, Stern made a silent protest against violence in the Middle East and resolved to overcome her fear of speaking out.

The 65-year-old San Joaquin County public health worker, who lives in Stockton, resolved to support the withdrawal of Israel from the Gaza Strip and the West Bank. She resolved to tear down walls even as a fence is being constructed to separate Israelis and Palestinians.

"I came to believe what the Israeli administration was doing was suicidal for the Israeli people," Stern said. If there is not a state for Palestine, the nation of Israel could fall, she said.

For a Jew who grew up dazzled by the "bright star of Zion," speaking out against Israel seems tantamount to blasphemy. But Women in Black equally decries the Palestinian suicide bombings and calls for an "embrace of our common humanity."

Now, Stern is a funereal-clad witness to all the violence in the world as a member of the Bay Area Women in Black, a chapter of predominately Jewish feminists and their allies focusing on a solution in the Middle East.

This past week has witnessed events that make the appeal more urgent.

On Tuesday, a nongovernmental peace settlement devised by prominent Palestinians and Israelis, which gives Palestine a state but erects a wall between Israelis and Palestinians, was being prepared to build popular consensus on its proposed borders, land exchange and refugee treatment. Its authors, among them participants in the failed Camp David peace talks of 2000, hope it will aid in future official negotiations.

"Those kinds of initiatives and those kinds of talks bring moderates to the table," said Rabbi Jason Gwasdoff of Stockton's Temple Israel.

As the week wore on, the ray of hope of the peace initiative was overshadowed by entrenched violence. Also on Tuesday, the Israeli military expelled 15 Palestinians from the West Bank, none of whom has participated in any attacks on Israelis. On Wednesday, three Americans were killed and one wounded when their diplomatic convoy was bombed near the Gaza Strip.

Jane Ariel, 62, a Berkeley family therapist who holds dual citizenship in Israel and in the United States, is one of the core members of Bay Area Women in Black. She went to live in Israel after the Six Day War in 1967 and stayed until 1980.

"At that time, none of us understood the implications of the occupation. Then the Yom Kippur War (also called the October War) in 1973 brought Israel up by its bootstraps that the surrounding Arabs were not happy with what was going on," Ariel said.

She returned to the United States in 1980 to work on her doctorate in psychology and became disillusioned after Israel invaded Lebanon in 1982.

"That was the first movement that was not necessary for the survival of Israel," Ariel said. "It became clear to me that there needed to be a strong Jewish voice against the occupation, against the policies of Israel, but not against Zionism or the Israeli people."

Women in Black is "distinctly against suicide bombing. But we are also against the humiliation of the Palestinian population," Ariel said. "Neither government is acting in good faith."

Jewish and Arab women formed Women in Black in Israel in 1988. Dressed in black to mourn the victims on all sides, they have kept a one-hour vigil every Friday for the past
15 years, holding signs demanding an end to the Israeli occupation and pursuit of peace.

There are now 223 WIB chapters throughout the Middle East, Latin America, Asia, Europe and the United States with the commitment to peaceful protest against violence and terrorism. Of those,
25 chapters are active in California, stretching from Arcata to San Diego.
::: Advertisement :::

Women in Black have stood against apartheid in South Africa and mourned for the "disappeared" in Latin America. During the war in the Balkans, Women in Black in Yugoslavia set an inspirational example of interethnic cooperation.

The international movement of Women in Black, represented by the movements in Yugoslavia and Israel, was nominated for the Nobel Prize for Peace and won the Millennium Peace Prize awarded by the United Nations Development Fund for Women.

Women in Black (Mujers de Negro) also is calling for a more thorough investigation of the unsolved murders of nearly 400 women and girls in Juarez, Mexico.

"We wanted to be a feminist presence, but we invite all people. Very often, women and children are suffering the most," Ariel said.

What Stern and Ariel dread is that by stating that they are against the policies of the Israeli government, that they will be labeled anti-Semitic.

Americans have already grappled with how dissent is interpreted since the terrorist attacks of Sept. 11, 2001. To dissent is anti-American, some believe, though freedom to criticize is the right of all who live in democracies.

"This polarization makes negotiation impossible. A good, strong opposition is the healthiest thing that can happen," Ariel said.

Refuse to be enemies

While the Bay Area group has been heckled occasionally, most people respond to their quiet dignity and to their signs.

In Emeryville, Stern stoically held a placard that read, "We refuse to be enemies."

"I am wary of the protest groups that I have heard of or seen in the past few years in the United States. Many of them have formed alliances with Palestinian groups whose main goal is to malign Israel,"
Gwasdoff said. "Palestine is perceived as the David and Israel as the big bad Goliath ... so much of it is tit for tat."

There is no doubt, Gwasdoff said, that the issues in the Middle East are complex.

"I mourn for the loss of life, both Israeli and Palestinian. Before the current Intifada, it seemed like peace was around the corner. We came so close," Gwasdoff said. "Ultimately Israel has to make an accommodation for the Palestinians. It's a demographic reality."

Within two decades, Palestinians will be a majority. In a democracy, their votes will challenge the status quo.

"I think the strategy of many in Israel today is that there needs to be a separation, and their first priority is security that they hope to achieve by building this wall," Gwasdoff said.

Sheldon Werber, 50, a member of Temple Israel, supports the security fence being built in the West Bank.

"Absolutely the wall is a good idea," Werber said.

There is no comparison to the Berlin Wall in Werber's mind. On both sides of that barrier, everyone was German.

"This is a cultural war. I think the Arabs are anti-Jewish. I don't think many of them accept the premises of the 21st century," said Werber, a chemist who commutes to the Bay Area from Stockton.

"There is a different value system to my way of thinking. Israel has a very Western orientation and is firmly part of Western civilization with its views on democracy and freedom. I think the Middle East is stuck in the 12th century," Werber said.

His remarks may seem charged with prejudice, but on Thursday, Malaysian Prime Minister Mahathir Mohamad told Islamic leaders at the Organization of the Islamic Conference summit that "Jews rule the world by proxy" and the world's 1.3 billion Muslims should unite, using nonviolent means for a "final victory."

He said Jews "invented socialism, communism, human rights and democracy" to avoid persecution and gain control of the most powerful countries.

Stern cannot comprehend the implications of life without freedom.

She is a former Peace Corps volunteer who also worked in Mexico as a young woman and has a humanitarian world view.

For 23 years, she lived in Washington, D.C., working in international family planning. She moved to Stockton in 1997 to care for her dying mother and has become politicized by the second three-year intifada and the mounting death toll.

Stern was born in San Jose and grew up in Santa Clara Valley in Cupertino. She enjoyed an idyllic childhood in the hills, but she worked picking apricots and prunes with migrant children and gypsies on her uncle's farm.

Her secular Jewish upbringing also was influenced by the Quakers, where she was introduced to passivism.

Her parents sent her to a multiracial children's camp in Los Altos in the 1950s. It was a farm run by a Quaker family for poor, inner-city kids.

The sheen on her privileged reality began to tarnish.

Before she graduated from Stanford University in 1960, she worked in rural Mexico with Erich Fromm, the German political psychologist and philosopher. She did field work in anthropology with the Quaker's American Friends Service Committee, building schools and teaching English in Valle de Santiago.

Fromm helped her to see people not as "the other but to see us as all the same," Stern said.

After college, she entered the Peace Corps and spent two years in Senegal. She spent a third year working on a World Health Organization project in community organization around health issues.

Today, she is a public health educator with children's medical services. With her two children grown, she's free again to devote more time to international issues.

Stern is motivated by Jewish values.

"This isn't the way to behave. You welcome the stranger. You treat others as you would like to be treated. You love your neighbor. If the end is peace, so must be the means. You do not use the methods of your tormentors."

This story has been posted in the following forums: : Headlines; COS - Senegal; Jewish Issues; Islamic Issues; Speaking Out

Dear Readers,
Below is a poem of mine, Justification, which was written after recent horrific events in Palestine in which a peace keeper was killed and 17 Isreali soldiers were found to have raped an eleven yr old Palestinian girl (this from Israeli military sources) The poem is a call for decent Jewish/Israeli people to come around and demand this kind of thing stops occuring, "in their name." I hope it meets with the fine standards of your organisation(s):

That concrete wall lies just yards ahead.
Before it, a redundant wire fence
is stretched across the barren waste land
broken, torn, ragged
like a discarded fishnet.
102fm plays Hatikvah
and the five-thousand go hungry.

By the broken front door
his head bloodied, holed
lies the peacekeeper, cold in the shadow of a child.
The stench is vile but all the while
soldiers smoke cigarettes by the wall
discussing crude ballistics
and easy girls.

A women, sobbing
paralysed by shock, her energy spent,
her dignity near death,
pisses where she sits
and prays that a plague be sent.

A while to the west
the damaged souls of Treblinka,
turn in their tightly packed space
disgusted and pained, asking,
“is this all it meant, all of that?”

In a small, dark room elsewhere
a little girl prays there’s enough ink left
for a final letter to her friend:

Dear Kitty,
What are they doing, our own?
Remember the queues,
how they spoke of showers, those showers.
Whatever it was for, it wasn’t this!
It wasn’t this; justification for this.
Tell them, Kitty
Tell them, please, tell them I…..