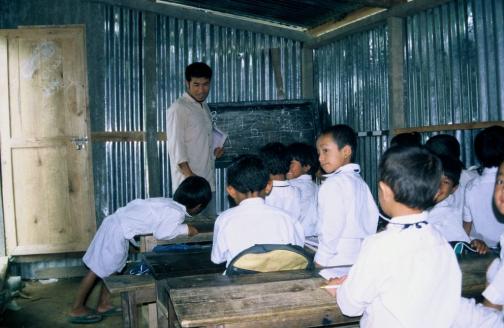 During his time off in Nepal, Pongkhamsing explored the Himalayas, climbing to the base camp of Kangchenjunga, the world's third-highest peak. (Photo by Chan Pongkhamsing, Peace Corps)


Taplejung is a village of about 2,000 people in northeastern Nepal where Chan Pongkhamsing served for two years as a Peace Corps volunteer. Using his degree in environmental science, he secured a grant for supplies and worked with villagers to slow the erosion on a 534-acre landslide near the village. (Photo by Chan Pongkhamsing, Peace Corps)

Click on photo to enlarge
Chan Pongkhamsing is a walking recruitment poster to convince you and me to join the Peace Corps.

But even Pongkhamsing, a 29-year-old Laotian-born American and a regional Peace Corps recruiter, admits there's a downside to assisting people in some of the most impoverished nations on Earth.

He talked about it recently while addressing a small room of potential volunteers at the University of Alaska Anchorage, recalling the two years -- from 1997 to 1999 -- he spent in a remote settlement in the mountains of Nepal.

"It was a challenge," he said. "I got giardia. I got cyclospora. I was sick a lot of the time, and I missed my family extremely at certain holidays. ... But the hardest part was actually saying goodbye to my community when the two years was over."

The custom in Taplejung, a settlement of about 2,000 people in northeastern Nepal, dictated that a departing guest pay a personal visit to the homes of all his acquaintances when it came time to leave, Pongkhamsing said. Some of the homes were a good hike away.

But it was also the reciprocal custom for the elders in each home to then offer the departing guest a drink -- invariably a stiff shot of a potent brand of home-brewed whiskey.

"I visited 30 homes," Pongkhamsing recalled. "I stumbled out of that village...."

But not before doing no small amount of good.

When he first arrived in Taplejung, he was informed that erosion had been eating away at the edge of the village for 50 years, causing a 534-acre landslide that had washed away 30 homes.

With his degree in environmental science, Pongkhamsing conducted soil tests and determined that an underground stream was flowing under the outskirts of the village, washing away the land.

"And they said, 'We understand that. We just want it to slow down.' "

So Pongkhamsing wrote a grant to a Danish forestry organization requesting $2,000 to buy materials to fight erosion -- and got it. He enlisted everyone he could to help lend a hand. Together they built 79 gabian-style retaining walls using river stones and cyclone fencing. They built 50 bamboo "check dams." They started a nursery to grow alders, conifers and bullrush to help curb erosion and planted the vegetation where it might do some good.

And when the next rainy season returned, the underground springs and surface rivers were far less destructive.

As a Peace Corps volunteer, Pongkhamsing also taught English and math to children in the local school. He helped the village women sell their crafts to a lucrative market in Kathmandu. He assisted his neighbors as they built new homes. During his time off, he was able to explore the Himalayas, climbing to the base camp of Kangchenjunga, the world's third-highest peak. He regularly visited a monastery and studied Buddhism.

All in all, it sounded like music to the imaginations of about 12 students who watched his slide show at UAA. Which was no mean feat in itself, considering the university's meager interest in the program in the past.

Only 18 UAA graduates have volunteered for the Peace Corps in the organization's 42-year history, according to Peace Corps statistics -- compared with 138 volunteers from the University of Alaska Fairbanks.

Part of the discrepancy might be explained by the fact that UAA's name has changed through the years. Jim Aguirre, a Peace Corps public affairs officer in Seattle, suspects the UAA number is low but says it's the only record he has.

He said that 855 Alaskans have joined the Peace Corps since its origin in 1961, when newly elected President John F. Kennedy signed the organization into law, proclaiming: "There is not enough money in all America to relieve the misery of the underdeveloped world in a giant and endless soup kitchen -- but there is enough know-how and knowledgeable people to help those nations help themselves."

Thirty-five Alaskans currently serve in the Peace Corps, including four from UAA.

To boost those numbers, several past Peace Corps volunteers from Alaska joined Pongkhamsing in a recruitment program at the BP Atrium the next evening that was intended for the public at large. About 50 people attended.

There is no age limit on volunteering for the Peace Corps, according to Kristen Franklin, a recruiter who joined Pongkhamsing in Anchorage. The Peace Corps has hundreds of volunteers who are older than 50, many of whom are married.

Altogether 6,678 Peace Corps volunteers are serving abroad. They're stationed in 71 countries, including nations in Latin America, the Caribbean, Africa, Eastern Europe, Asia and the Pacific Islands.

More than 60 percent of the volunteers are women, and more than 90 percent are single. The average age is 28, but about 6 percent are over 50. The oldest Peace Corps volunteer serving abroad is 84.

To be eligible you must be 18 years old, a U.S. citizen and ideally a college graduate, though some volunteers are accepted without college degrees (including people skilled in construction and agriculture or who own their own businesses).

Volunteers usually specialize in one of five programs: education (the specialization of nearly 40 percent of all volunteers), health, environment, agriculture and business development (a high priority in former Soviet republics).

Besides the gratification of helping others, the volunteers receive free schooling, including intensive language training that might be useful in later careers. They receive full medical and dental coverage, free transportation and 48 days of vacation. Student loans received prior to joining the Peace Corps are deferred during service. Volunteers also receive living expenses in the host country and a $6,000 payment after discharge.

"You should not have any personal expenses while you're in the Peace Corps," Pongkhamsing said. Even if you have to return to the states on an emergency visit due to the illness of someone in your family -- as he did.

The application process -- which can be started at the Peace Corps Web site (www.peacecorps.gov)
-- usually takes four to eight months. The process involves submitting an application, being interviewed, receiving a nomination, undergoing an extensive health and legal review -- then receiving an invitation to serve in a specific country (selected by the Peace Corps from the preferences of the applicant).

Sometimes the nominated country is a surprise -- as it was for Pongkhamsing. (Volunteers can refuse the assignment and request another.)

In earning his degree in environmental biology at the University of California at Davis, Pongkhamsing had acquired a lot of coastal erosion control experience.

"So I thought I was going to go to
Fiji," he said, laughing. "That's where they really needed me, right?"

But instead, the placement officer told Pongkhamsing they'd like to send him to Nepal -- a landlocked country -- to work on erosion control.

"I said, 'Nepal?! I had no idea we had a program in Nepal. I've always wanted to go to Nepal because I'm a big mountaineer.' And I immediately accepted his offer.

Reporter George Bryson can be reached at gbryson@adn.com.