Buy the book "Hyenas laughed at me and now I know why" and read the story "Good Dog!" By Mali RPCV Mary Noble 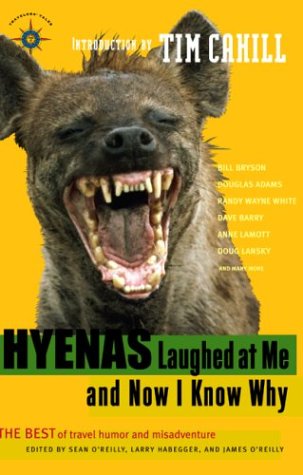 Buy the book "Hyenas laughed at me and now I know why" and read the story "Good Dog!" By Mali RPCV Mary Noble

What was that sound in the night?


As a new Peace Corps volunteer in a village in Mali, West Africa, I was prepared for any calamity that could come my way. I was ready for snakes, scorpions, malaria, motorcycle accidents, and countless parasitic intestinal guests. Bring it on! All of these, plus a number of other unanticipated challenges, were hurled my way in two years of living in the village of Kangaba. Yes, I was fresh out of college, and ready for my AFRICAN ADVENTURE. I liked to think of it in all caps, just like in A Prayer for Owen Meany. That way, it was sure to be significant.

About three months into my service, I had adjusted to eating millet every night (you know it more affectionately as “birdseed”); squatting over a pit toilet with the cockroaches; eating goat innards with my hands out of the community bowl with my host family; working hard in the fields all day, and not speaking English for weeks at a time. All this, I thought, would impress the folks back home and was not really such a big deal, because I felt so at home already with my friends in the village.

One night, as usual, I was reading in bed in my mud hut, under a mosquito net. I was also taking care of a dog that belonged to another volunteer while he was away from the village traveling. The dog, Che, was a medium-sized plain Black Lab type of dog. Not the sharpest arrow in the quiver, but a faithful companion, and I liked having him around. Each night, I would take my eyeglasses off (I don’t need them for reading), put them on the bedside table, grab my book, and tuck myself into the mosquito net, armed only with a fifty-cent flashlight from the local market. Ah, I was all tucked under my net like a cocoon, reading a well-worn, yellow-paged Barbara Kingsolver book that had lovingly been passed from volunteer to volunteer. I was remembering that in the height of the Malian empire, books traded for more than gold in Timbuktu, and I thought of history repeating itself among the Peace Corps diaspora. We loved books.

I suddenly became distracted by Che’s actions. He had been lying next to my bamboo bed quite contentedly. I sat up to observe him, with foggy focus because my glasses were outside the mosquito net. He was standing at attention with perky ears, body in geometrically perfect alignment, one paw raised straight. It was pointing toward an area right underneath my bottom, under the bed. Hmmmm…I thought. I guess there is another mouse, or a lizard under there. Ah, well, back to the book. I dismissed Che like an underpaid lackey.

But Che was still pointing, like an English hunting dog, and I wondered admiringly where he had learned that trick. I decided to slowly pull the straw mattress back, so I could peek under the bed frame and scare the mystery critter out. As I peered about four inches under my precious buttocks, I saw a very large, beady-eyed, not-very-friendly looking rat the size of a camel. Like me, the rat became startled, Che became consumed by instinct, and my heart hammered against my ribs at an alarming rate. After that, as they say, it was all a blur. Literally. My glasses were still outside the mosquito net on the table, and I could not see beyond the distance of a book. I was too terrified to risk putting a limb out of my cocoon. I shook my flashlight, cursing the faltering life span of the batteries. The weak golden glow emanating from the cheap plastic torch was illuminating just enough of the drama in front of me to keep me curled up fetus-tight, protecting my buttocks and other extremities, my heart pounding.

I heard pig-like squeals, wolf-like growls, baby-like cries, and Hitchcockian screams. The two producers of this cacophony made their way to the corner of my bedroom, over to my makeshift concrete-block shelves in the corner. Whoa! There went three pair of underwear and a few pairs of socks, airborne over the rat-dog cyclone below. I squinted to see more of what was going on, and I caught a blurry glimpse of a small stuffed teddy bear, dressed in a lacy smock my mother had sent me in a recent care package. How embarrassing that she did that to her twenty-three-year-old hippie daughter, I thought at the time. But now that Teddy was turning to shreds as it did acrobatics in the air above the scuffle, I became enraged at the rat for violating a symbol of love from my mom so far away. I was pissed. “Go, Che!” I cheered like a WWF wrestling fan. The screeches grew louder, undergarments still flying in the air. I was still squinting, and my hands clenched harder on the flashlight as it sputtered and ran out of juice.

Darkness. Silence. I waited, hearing my own accelerated breath. I heard Che’s paws on the concrete floor coming closer to me. Courageously reaching a hand outside the mosquito net, I retrieved my lantern and eyeglasses. I struck the match to inspect the aftermath. O.K., my Peace Corps recruiter did not tell me about nights like this. My bedroom was a disaster area! Torn-up underwear and socks, a de-stuffed, de-smocked, de-headed teddy bear, and rat blood in puddles all over the floor.

Meanwhile, Che, all of a sudden, was a proud, A+ student who had just completed his final exam of Smart Dog Academy. The limp, lifeless rat at my feet was the assessment. He looked at me, begging for praise, and hoping for some sort of treat for his efforts. “Yeah, that’s just frickin’ great,” I heard myself say out loud to him. “Good job. Now get that thing out of here! Out, out!” He was all of a sudden dunce dog again. He laid it closer to my feet and smiled a stupid smile. I think he drooled on purpose. “Arrrrrgggh!” I marched to the next room and got inventive. I returned with my rudimentary garden hoe and the dustpan. I scooped the rat up, tossed him into the dark yard for now, and returned to mop up the blood-soaked teddy-bear stuffing.

As I was cleaning the room, thinking what-an-independent-strong-adventurous-woman-I-am-and I’m-in-the-middle-of-Africa-in-the-middle-of-the-night-all-by-myself-and-I’m-just-fine-cleaning-up-rat-blood, no-problem, I-am made-for-this-kind-of-challenge, but-I’m-getting-a-little-lump-in-my-throat, Che came back inside. He was portering the limp rat, and laid it at my feet as if to say, “I don’t think you had your glasses on last time, so maybe you didn’t see what a good boy I am.” I noted the size of the rat. Big. I took a deep breath, patted his head, and tried to be sincere. “Good boy, Che.” I tossed him a hunk of stale bread, and he happily trotted to the corner. I chucked the rat outside again, and locked the door.

Somehow, I managed to clean up the room, put away some non-shredded clothes that survived the battle, have a good little homesick sniffle about the teddy bear, wash my hands about ten times, then curl back up with my book. I kept my glasses nearby this time. I slept well.

The next morning, I realized the rat did not just vaporize into rat heaven, and it was squarely in my path on the way to the cockroach-inhabited latrine. Hmmm…I went over to my host family’s hut across the dirt path from my hut for a much-needed intervention. I was surprised how much Bambara I knew, and couldn’t believe I had acquired the vocabulary to explain the night’s events satisfactorily to my host family’s comprehension. I felt quite proud for a moment. They asked me if I was O.K., had a little laugh at my expense, then sent one of the older brothers over to my yard to take care of the rat.

Now, this older brother seemed from time to time to delight in shocking the new, naïve, toubab woman. This was one of those times. As he reached down to pick up the rat, he said casually, “Lunch.”

“Lunch?” I choked out. I wanted to be sure I understood his Bambara. I eat lunch with the family every day.

He made sure to make eye contact with me, which is rare for gentle Malians. He locked onto my eyes and said essentially, “Yup, and this is the best part.” He held up the rat corpse, yanked off the testicles and held them up in his palm for me to see. I smiled back, trying as hard as ever not to show the complete horror I was sure was all over my face.

I stood there for a minute in my hot, dusty yard in Kangaba, Mali, where I felt so strangely at home, trying to figure out what lesson, what great meaning this event could bring to my life. I was feeling very sure that something profound was happening out of all this.

But then I shrugged my shoulders and strolled over towards my hammock to take a nap before lunch. “If it’s not a good time, it’s a good story,” I told myself. That would be my mantra for the rest of the two years I lived in Mali, which were, absolutely, the most profound and magical years of my life.


Mary Noble got hooked on travel during her time living in Africa. She currently teaches at an international school in Thailand and spends summers in Alaska and Michigan. This is her first published story. If you want to send her advice about not using mixed metaphors, you can reach her at mary_noble@hotmail.com.

This story has been posted in the following forums: : Headlines; COS - Mali; Humor; Writing - Mali