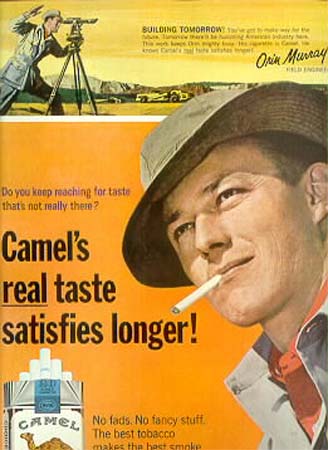 Confessions from a reformed nicotine fiend

It is probably fitting, in this week of the Great American Smoke Out, to confess that I was once a true butt fiend. I put the chain in chain-smoking.

The funny thing is that when I was a child, I thought I would never smoke.

My dad liked to smoke a cigar every once in a while, which normally didn’t bother me. In fact, I tended to identify him with the smell of a cigar.

But whenever the family was packed into the station wagon — and I mean packed because there were 12 of us kids — and we all vied for the window seats, I got a different take on that cigar smoke. I’d get car sick. It was actually smoke sick, since I was fine if I lucked out and got one of those window seats and could lower the glass for some fresh air. Even in the dead of winter, that window would come down, drawing protests from the rest of the car’s occupants, who I dutifully ignored until I’d get a yell from dad or ma.

Then there was the time when I was about 8- or 9-years-old and some friends shared a few cigarettes they had swiped from their parents’ bedroom.

We all had to try one, of course. You’d be a real chicken if you didn’t. But when I did, I got a bit light-headed and then nauseous. Being the macho king (I was about four inches taller than my friends then, and lean and mean), I never let on and finished the stupid thing.

Fortunately, I never had to take another smoking challenge.

In fact, I remained butt free until 1969 when I was serving with the Peace Corps in India.

I’d been declared 1-Y by the draft because I had scars on my Achilles tendons on both legs. Any time I wore anything higher than a regular shoe, the friction of the shoe against the scar tissue would chafe it and create an open cut that took several weeks to heal.

That meant, the Army doctors at the recruiting base in downtown Boston told me when I was a senior in high school, that I couldn’t wear combat boots, which meant I couldn’t undergo basic training. So I coasted through college, never worrying about the Vietnam draft, but still felling I owed the country something in the way of service.

Because I had worked for a local well-drilling company during my college summers, when I enlisted in the Peace Corps they put me in one of the first technical programs. Prior to that, volunteers went to small villages around the world and made nice with the locals, or taught English, or got involved in raising chickens. Some villagers allegedly believed a chicken egg was no good until, or unless, it was fertilized, unlike the vast majority of eggs sold here — which are rarely fertilized.

Anyway, my job was to work with local engineers and well-drilling crews and teach the techniques of drilling for water. We operated a rig called the RC 312, which could drill a 300-foot hole that was 12 inches in diameter into the clay soil of the Gangetic plains. We also used percussion drilling rigs which essentially used a big weight to pound a piece of pipe into the ground.

The problem was that in 1969 and 1970, India was hard-pressed for hard currency. At that time, one dollar would buy 7.5 Indian rupees at the official exchange rate, though the dollar often sold for as much as 13 rupees in the black market. Today it takes 45 to 50 rupees to buy a dollar. The rupee still doesn’t have much value on the international market.

At that time, India sold its best steel outside of the country, leaving a lower grade metal for Indian manufacturing firms.

I discovered that fact one day as I watched a steel I-beam bend like a piece of salt-water taffy each time the drilling rig lifted the driving weight high enough to strike the pipe again. The metal walls of the pipes we worked with were so thin you could almost bend them by hand. And I was responsible for all of the people working with this heavy equipment.

I would look at the day laborers, all of whom were barefoot and clad only in a dhoti — which is sort of like a bible-era cotton wrap. There were no safety helmets. And then I would look at that steel, twisting and bending each time it reached the top of its arc, and I could envision mangled bodies, shredded flesh, and piles of corpses if that beam ever snapped and the steel cable tied to the weight whipped around like the grim reaper’s scythe.

If I’d been a drinking man, I would have probably had a bottle in my back pocket. Instead, I began to smoke. First I tried the tiny Indian cigarettes called biris, then I moved on to real cigarettes.

Fortunately, though there were many breakdowns of the equipment, no disasters occurred.

But when I returned to the states, it was as a smoker. My dad died a few months after my return.

Then I became a journalist and built a chain into the equation, lighting a new cigarette before finishing the old, sometimes lighting a third as I worked hard on deadline, only to look down and see two others burning in the ashtray.

This went on for a few years.

My family nagged, friends nagged, everyone nagged that I should stop smoking.

But as anyone with an addiction will tell you, you can’t and won’t stop until you finally decide for yourself to stop. And even then it isn’t easy.

One morning as I woke up and reached for my first cigarette of the day (from the pack on the bedside table) and coughed several times I asked myself, “How stupid is this?” Here I was hacking my lungs out, and reaching greedily for another cigarette — the very thing that was causing me to cough in the first place.

That’s when I decided to quit.

So, on Jan. 2, 1985 I stopped smoking cold turkey. I would have done the traditional New Year’s Eve resolution thing, but Doug Flutie and the BC Eagles were playing Texas in the Cotton Bowl on Jan. 1 and I knew I’d never get through the game without a butt.

Quitting wasn’t easy. But I toughed it out. Soon, food smelled and tasted better.

After a few months, I no longer reached for that (absent) cigarette when I awoke, or had a cup of coffee.

About a year after I quit, my family mentioned that I had sort’ve been an antagonistic, nasty, grumbling, mean SOB for those first few months.

Me? Mr. Nice Guy? Mean? Nasty? Never could’ve happened, I thought. But thinking back, I was so focused on not smoking, on not reaching for that butt, or concentrating on not bumming one from someone that I couldn’t remember much else.

“Oh, yes you were,” they insisted; I guess the witnesses outnumbered me.

So I’ve been clean ever since.

Except for one little exception. Every once and a while I’ll have a cigar and remember my dad when I do.

Charles Ryan is editor of the Chronicle

This story has been posted in the following forums: : Headlines; COS - India; Cigarettes