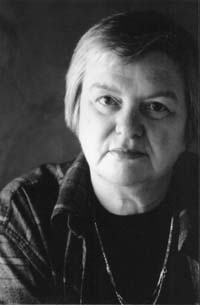 I was born and grew up on the West Side of Manhattan in the days when that area was full of European refugees from World War Two. My parents were artists, my toys were paper and colors, and it was assumed that I would be an artist too. But by the time I began studying at Barnard College (I graduated in 1961) I knew that I was going to be a writer. I didn't make it into the brand-new African Studies Program at Columbia University (at the time I thought I was going to write novels set in romantic, exotic, post-colonial Third World countries, so this seemed to be the way to go); instead, I took the test for President Kennedy's newly-announced Peace Corps — and was accepted.

Nobody knew what to do with the bunch of restless liberal-arts grads the test netted, so they trained us to be teachers (everybody needs teachers, because the home-grown ones don't want to go back to the bush once they're trained; they became teachers to get out of the bush). After a two-year stint in Nigeria, first in a rural private school for girls and then in a new college in the provincial capitol of Ibadan, I came home with my own New York provincialism destroyed for good. I took a Master of Arts in Teaching at New York University and taught for three years in a private school. The students at New Lincoln taught me that the Viet Nam War was a huge, ruthless, brainless scam, perpetrated by the same war-crazy lunatics who have been using war in poor countries to test new weapons ever since (I should have figured this out for myself, but the Peace Corps was such a great experience that I hated to believe that we had been a "carrot" to Viet Nam's "stick" in the Cold War).

When one of my students told me she had taken LSD and her brain was melting, a drug treatment team was called in from Flower Fifth Avenue Hospital, people who specialized in helping schools with drug problems. They hired me away with them as a curriculum consultant. Meanwhile I was trying to sell my first novel, a perfectly idiotic Western which, fortunately for me, was turned down by every publisher in the business and has since been lost.

In 1969 I married a New York lawyer who was also ready to leave the city, and we moved to New Mexico in 1970. We lived in a little adobe slum out in the semi-rural North Valley, and I began writing fiction full-time. We've been in Albuquerque ever since, with cats, dogs, step-kids, and even my old Dad who came from New York to live near us for the last 18 years of his life.

Once physically transplanted, my restlessness became largely a matter of mind; SF and fantasy provided all the freedom any writer could desire. Encouragingly, my first novel, Walk to the End of the World, was a John W. Campbell Award finalist. Walk began an unforeseen four-book cycle that didn't end until The Conqueror's Child was published in 1999, completing a futurist, feminist epic of proportions that would have paralyzed me with terror if I had seen the scope of it from the beginning. In addition, over the intervening twenty-five years, I've written four Young Adult fantasies; two vampire novels; a mainstream novel about art, ghosts, and land fraud set in New Mexico; a clutch of shorter stories; two plays, and the complete revision of the libretto to a musical, Nosferatu, which has yet to be performed in its new version.

So far, it's been a fine life: I've worked hard, won some awards, done a good deal of travel and teaching, and found friends among a splendid cohort of SF and fantasy colleagues and readers — and I've still got (mostly) my health and my teeth. My grandma would be proud.

This story has been posted in the following forums: : Headlines; COS - Nigeria; Writing - Nigeria