Mark Ferree and Chris Dahlstrom, both graduates of McPherson High School, Class of 1999, are serving in the Peace Corps. Ferree is in Jamaica and Dahstrom is in Macedonia 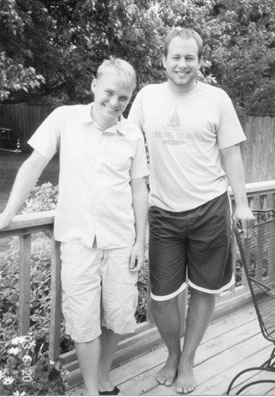 Mark Ferree and Chris Dahlstrom, both graduates of McPherson High School, Class of 1999, are serving in the Peace Corps. Ferree is in Jamaica and Dahstrom is in Macedonia

Mark Ferree, left, and Chris Dahlstrom, both graduates of McPherson High School, Class of 1999, are serving in the Peace Corps. Ferree is in Jamaica and Dahstrom is in Macedonia.

Two young men from McPherson, graduates in the McPherson High School Class of 1999 who attended Sunday school together and were members of the same Scout troop, are pursuing similar avocations as well, serving in distant countries as Peace Corps volunteers.

Mark Ferree, a University of Kansas graduate, and Chris Dahlstrom, a Kansas State University graduate, recently have taken up residence in Jamaica and Macedonia respectively, and are learning to adjust to life outside of the state of Kansas.

Ferree, son of Dr. Richard and Sue Ferree, left McPherson in July to become a part of the Environment Sector at Peace Corps Jamaica. His job title is environmental promoter for the National Environmental Societies Trust. NEST is a non-governmental umbrella organization for most of the other environmental NGOs on the island, said Ferree. Helping out around the office, doing everything from updating the website to staying in contact with member organizations, Ferree's primary project has been with the International Coastal Cleanup. NEST coordinated the Jamaican coastal cleanup and Ferree has assisted in collecting data and compiling the results.

An anthropology major at KU, Ferree said his degree was a big influence in his decision to join the Peace Corps.

"Anthropology is the study of peoples from other cultures, and I decided that living and working in another culture was the best way to decide if I wanted to pursue anthropology further in graduate school," Ferree conveyed via email.

The culture in Kingston, Jamaica, a city of over one million people, is definitely different than a small town in Kansas. Adjustment to big city life has been difficult for him. Problems associated with most big cities, including crime and homelessness, are prevalent, and shanty towns exist between the nice houses where the roads don't go. Added to that has been the adjustment of not having a car of his own.

"We are not allowed to drive, and I couldn't afford a car on our stipend anyway," he said. "There are lots of beautiful places I've wanted to visit, but don't have the freedom to jump in a car and go."

He said he has adjusted to this by really learning the public transportation system and has learned how to get just about anywhere using taxis and buses.

The Jamaican people are generally friendly, but because Kingston is a tough town, they can seem less-than-friendly at first, said Ferree. The Peace Corps has been a presence in Jamaica for 40 years, and people there generally see the value and welcome volunteers. However, because Jamaica is more developed than many of the countries where the volunteers are located, some people feel like they are more than capable of helping themselves, he noted.

Language is not too much of a barrier. Though English is the primary language in the cities, much of the population speaks Patois, a mixture of English, several African languages and a little Spanish.

"Every Jamaican you talk to uses a different mix of Patois and standard English. Some speak only in Patois and I am still hard-pressed to understand what they are saying even after almost four months here. Others speak only English and have trouble understanding the Patois spoken in the rural areas themselves," he said.

"Mark's mission statement is to experience life in a different culture," said his mother, "and discovering what it is like to be the only blond, blue-eyed, white-faced person there has been different."

She noted that learning to live within the confines of a budget has taken some effort on his part as well.

"It's been fun for us mothers to have one another to talk to," Chris' mother said of the additional common bond that she and Sue share. She said the two boys have a lot in common, but neither knew that the other was planning on going to the Peace Corps until after they had already signed up. Chris is the son of Hugo and Neisha Dahlstrom.

Dahlstrom graduated from KSU with a degree in psychology. He left for his Peace Corps training in September and has been learning of the Macedonian culture and language in Istibahnja, a small mountain village in the small Slavic country which is about the size of Vermont. He has just learned that, following the completion of his training in December, he will be working in Veles, Macedonia, but the exact project was not specified.

"I joined the Peace Corps to take a break from the monotony of school, to experience a different environment and culture than what is offered in the states, and to begin seeing the wide world," Dahlstrom indicated via email.

He said the language has been very difficult to learn, but since a good number of people in the country know English, he has had little problem with communication.

The people, particularly the youth in Macedonia, have been very interested in why he chose to come to their country, Dahlstrom related. Their curiosity is always accompanied with smiles and he said he has not experienced any sort of negative reactions as an American.

"I have felt well protected in the small village of Istibahnja, and I assume I will feel similarly in Veles," he said.

Dahlstrom has been living with a family of four in Istibahnja. The father installs tile for a living, and though the mother formerly worked in a textile factory, she is now unemployed. Their two sons are in school.

"The work of the Macedonian people is a complicated subject," he explained. "One-third of the country is unemployed and those that do have jobs are doing some sort of manual labor or working in stores. Those not working seem to busy themselves with collecting, preserving and storing food. Bread, peppers and goat cheese are a few of the staple foods and many of the families have chickens, goats and pigs."

"In a typical day, one might drink up to two liters of Turkish coffee," Dahlstrom noted, "These people bleed coffee!"

Enthusiastic about his stint in the Peace Corps, Ferree said his parents were happy to hear he would be in Jamaica because it was a lot easier to visit than many of the countries where the Peace Corps is working. Dahlstrom noted that his parents have been nothing but supportive through the entire process as well. This adventure in the wider world will certainly add dimension to their sons' lives, the parents agree, and they are enjoying their experiences right along with them.

This story has been posted in the following forums: : Headlines; COS - Jamaica; COS - Macedonia