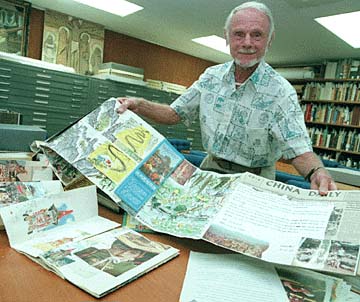 From the tranquil view off the cozy veranda and the elegant simplicity of the apartment's decor, it is hard to imagine Arthur Goodfriend having anything other than a life of peaceful harmony.

Goodfriend said he dislikes socializing, instead enjoying personal time alone reading a good book, swimming at the Outrigger Canoe Club or pumping iron at a nearby gym.

Goodfriend, the world's oldest-ever Peace Corps volunteer who turns 90 this month, is an exception to all of the beliefs surrounding old age. As spry at 90 as he was as a younger man, Goodfriend's deep voice belies his age, and his speed and thought processes rival those of people half his age.

"Every year has been an important year," he said. "I think this has been a life well-lived."

Throughout his 70 years serving America, Goodfriend has worn many different hats: that of a soldier, advertising executive, journalist, foreign diplomat, professor, husband and father among others.

He now works with the Peace Corps' sister association, AmeriCorps, with the VISTA (Volunteer In Service To America) program. He wrote a book on Alzheimers with the Honolulu branch of the Alzheimer's Association, and helped two homeless women write a book on their lives.

The book's delivery to AmeriCorps headquarters in Washington, D.C., next week will signal the completion of his volunteer term.

Goodfriend kept detailed, self-illustrated journals on his experiences, at least one for each year of his life. "Life is very important and people should keep a record of it," he said.

"Each adventure I had, I'd keep a book. Each year, each record would be more important than the last. It gave me an incentive to lead a more interesting life."

His collection of about 90 journals reveals two secrets to living well: living simply and opening your mind to travel.

Simple living helps people appreciate what they have, he said, while allowing the world to be your classroom leads to valuable life experiences that cannot be learned in school.

On his first trip around the world in 1935 -- as a journalist focusing on men's fashions for the New York Herald Tribune (paid in part by a group of manufacturers interested in his findings) -- Goodfriend came into contact with Emperor Hirohito, Mahatma Gandhi, Adolf Hitler, Benito Mussolini and Joseph Stalin. He met Hirohito at a garden party in Japan, and the last three in their native countries when they were giving public speeches. Meeting Gandhi was more personal.

"I was in India looking for menswear ideas," said Goodfriend. He had expressed interest in the uniforms worn by the British army stationed in India and asked the regiment's general for samples. He then sought out Gandhi to ask how he hoped to expel the British from India when their weapons and soldiers seemed more powerful than Gandhi's hopes and prayers.

"He said, 'Maybe my hopes and prayers are bigger than the whole British army,'" Goodfriend said. "And you know? He was right."

But Goodfriend did have his share of problems. While on that world tour, Goodfriend, his wife (they are now divorced) and children Julie and Arthur contracted malaria in Indonesia and intestinal worms in India. All overcame both health problems.

In the then-Soviet Union, Goodfriend was thrown into prison for about 10 hours for taking pictures of the Soviet armed forces during a May Day celebration.

He had no authorization for the photos, and the Soviet leaders thought he was a spy. But because of a humorous mistake, he was let off the hook.

"I was lucky," he said. "I'd forgotten to take the lens cap off, so there was no proof that I'd taken any pictures. They couldn't prove I was a spy." Goodfriend said he was finally freed from his cold jail cell around midnight. "They let me go," he said, "and I escaped from Siberia."

But this unpleasant experience led to more fulfilling ones through what Goodfriend called a series of "linkages," or connections that led to other people and experiences. "Life was a progression of links with people that led me up, up and away," he said.

Goodfriend said his proudest achievement is a collection of 30 comic books done for the people of the Philippines between 1970 and 1972. The "Lito and Lita" series focused on various health problems facing Filipinos, engaging the people's attention through familiar drawings (such as cock fighting, which has a tremendous following in the Philippines).

With the end of his term as a VISTA volunteer close at hand, Goodfriend said he will take a break from his work life to concentrate on completing his autobiography, and spend time with his children: Julie, a psychiatrist; Arthur, a writer/publicist; Brett, a champion surfer; and their families.

"It's been 90 years of embracing the planet," he said. "I think I deserve, now, a period of tranquility."

Goodfriend offers this advice to future generations: "If you respect your life, keep a record of it. Don't take it for granted," he said. "If you keep a record (of your life), it will help you to improve it."


The oldest Peace Corps Volunteer ever to serve was Arthur Goodfriend, of Honolulu. Goodfriend was 87 when he completed his second Peace Corps tour. He served in the Philippines from 1977-79, and in Hungary from 1991-94. Arthur Goodfriend, former special assistant to the chancellor at the East-West Center, passed away June 1, 1998 at the age of 90. His memoirs as a journalist, soldier, diplomat, author and educator are contained in detailed journals, which he donated to the UH Hamilton Library.

This story has been posted in the following forums: : Headlines; COS - Philippines; COS - Hungary; Older Volunteers