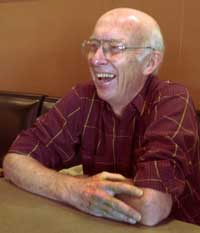 UW's Torphy, now retired, is still something to remember

At first glance, Arnold Schwarzenegger and John Torphy would appear to have little in common, other than state government experience.

But the muscle-bound Republican governor and the self-effacing, left-leaning university budget master can both thank Sargent Shriver for changing the course of their lives.

This summer, Torphy, 63, completed his 29-year career in Wisconsin state government, during which he impressed his colleagues with his refreshing persona and mathematical powers of total recall.

Torphy, a man who never wore a suit and never had a computer in his office, could remember, to the penny, what a department director had requested without looking at his notes, said Paul Barrows, vice chancellor for student affairs at the University of Wisconsin-Madison.

Shriver, of course, is John F. Kennedy's brother-in-law, was the founding director of the Peace Corps, and was George McGovern's running mate in their unsuccessful 1972 presidential campaign. Shriver's daughter, Maria, is Schwarzenegger's wife.

As for Torphy, the connection with Shriver was more fleeting.

When Torphy graduated from UW-Madison in 1962, he expected to study at Columbia University to become a history teacher. But soon after graduation, he walked across Library Mall, and had an epiphany.

"I said, self, why am I going to graduate school?" Torphy said in an interview at a west side coffee shop near his home.

So he took time out to serve in the newly created Peace Corps. He did community organization work, building houses and schools in the Dominican Republic. Afterward, during a period of civil war, he took part in a USAID project, working with the Dominican government to organize its office of community development.

When he arrived at the Peace Corps office in Washington in 1965 to serve as program director for the Latin American region, he had never taken a business or economics course.

One day in 1966, Shriver was at a Cabinet meeting, and President Lyndon Johnson listened as Defense Secretary Robert McNamara extolled the virtues of Program Planning Budgeting Systems. It was a future-oriented budgeting method that McNamara said, at the time, was making a big difference in the "success" of the Vietnam War.

"Johnson allegedly said, 'That is outstanding, we ought to be doing that in every Cabinet agency,' " Torphy said. So Shriver came back from the meeting, got his directors together, and instructed them to start making budgets. Torphy had never made a budget, and learned on the fly. And, he and others discovered, he was good at it.

Over the next eight years, Torphy bounced among interesting budgeting and policy jobs, including assistant deputy mayor of San Francisco, advisor to the Puerto Rican government, policy analyst for the federal Office of Economic Opportunity, and senior analyst for the U.S. Conference of Mayors and the National League of Cities.

It was the draw of open air that drew Torphy and his wife Helen back to his home state of Wisconsin. She wanted a place to raise horses, and he had the opportunity to take over the 300-acre family farm near Barneveld, Torphy said.

More than horses and sheep awaited the Torphys in Wisconsin. He applied for, and won, the position of state budget director in 1974.

Barrows recalled that 15 years later, in 1989, an unassuming man in a plaid, short-sleeved shirt and horn-rimmed glasses sat outside the room where candidates were interviewing for the position of UW-Madison budget director.

Barrows, a member of the search committee, recalled he didn't know what to think then. But when Torphy's interview was over, Barrows understood. The chairman of the search committee turned to Barrows and said, "Young man, if he gets this job, you will never be in a room with anyone who is more intelligent than John Torphy."

Torphy did get the job, and eventually became vice chancellor for administration. Barrows added: "John Torphy has always been one of the most brilliant people at the table."

During the late 1990s, Torphy was a key member of UW's negotiating team to pass the Madison Initiative, a public-private plan to recruit and retain top faculty. That helped the university regain its footing after years of watching the state reducing its share of revenue for university academic programs.

"One of the values he brought to the office, to Bascom, was his experience with state government, so he often was able to give us perspective on how people in the state government might be viewing a certain issue," Spear said.

Barrows noted Torphy didn't have a computer in his office, and often handwrote notes to give to his secretary, who would type them up and send them over the computer.

But the man who learned budgeting because he had to also learned enough about computers to negotiate with Microsoft and oversee the installation of a new campus-wide student database system in 1999.

"I told the person from Microsoft I had no interest in computers, and she looked at me with the wonderment of, 'Why the hell are you sitting across from me?' She was kind enough not to say that," Torphy said.

Torphy said he has just recently started to use e-mail, borrowing his wife's computer.

The Torphys sold the family farm five years ago, and moved to Madison's west side. They now have a place in Florida, where they will spend the winter. They have one grown son, Sean, 35, who lives in San Diego and works as a parole agent for the state. Sean Torphy was married in September.

John Torphy said the lessons he has learned along the way are mainly about managing people. Give them the resources and information they need, and they will thrive, he said.

"I'm thankful for a wonderful family, and I'm thankful for the opportunity over 41 years to do lots and lots of jobs that were challenging and fun. And most of all I'm thankful for lots of people who have worked for me and for whom I worked, who were willing to put up with me," Torphy said. "They made me look awfully good over a period of time."

This story has been posted in the following forums: : Headlines; COS - Dominican Republic; University Administration