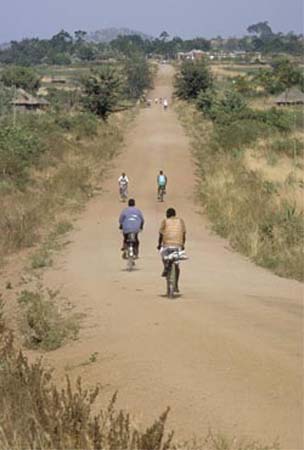 Phyllis Craun-Selka has had a conscientious eye on the world beyond the familiar boundaries of Orange, even in the 1970s when she was a student at Orange County High School.

"My schoolmates in Orange may remember that we gained some notoriety when we petitioned to have the senior money sent to Bangladesh in support for their struggle for independence in 1971," said Craun-Selka.

After graduating from Orange County High School in 1972, she attended Virginia Commonwealth University in Richmond and delved further into her cultural interests by pursuing a degree in Anthropology. Inspired by the Scottish Anthropologist Colin Turnbull, who at that time was teaching at the university, Craun-Selka in 1976 decided to join the Peace Corps. "I had been thinking about it since I was 12 and had written to Washington requesting information," said Craun-Selka. "They advised me to wait a few years."

"Unfortunately, I became the only Peace Corps volunteer quarantined in the Ebola outbreak of 1976 and had to be evacuated."

Luckily, Craun-Selka completed her service alive and well, and went on to teach French and World History at the Steward School in Richmond. In 1980, she moved to D.C. to pursue a career in international development. "After a kind of apprenticeship at the World Bank and part time studies in Economics, I decided to risk it all, quit my job, borrow money, and go to graduate school at the School of International Training in Vermont," she said. "Best decision I ever made." While in Vermont, she met a exceptional man named Dan Selka, "whose goals were similar to mine," she said.

The couple returned to Orange and married in 1984. Craun-Selka said guests came from all over the place. "One German friend was driving my Volkswagen down from Vermont. Just past Gainesville on Route 29, she came upon a Civil War re-enactment also scheduled that weekend and screeched off the road and jumped down into the floorboard, petrified that she had stumbled upon the worst of the south. Another friend from Bangladesh couldn't come to the wedding but sent a card addressed simply, 'Phyllis, Orange, Virginia' and I got it!"

Craun-Selka and her husband were temporary caretakers of Berry Hill in Orange before they "took off for China for a year of teaching at the agricultural university of Shandong, halfway between Beijing and Shanghai."

"At the foot of one of China's holiest mountains, TaiShan, we started our lives together and had a fabulous year as the first Americans to live in the community since the Chinese Revolution of 1949," said Craun-Selka.

The couple's adventures were just beginning. In 1986, the returned to D.C. and camped until they raised enough money for an apartment deposit. Since then, the couple has traveled extensively to help contribute to America's foreign assistance work. In the past 15 years, they have worked in Bangladesh, Bénin, Burkina Faso, Cambodia, Central African Republic, China, Cote d'Ivoire, Ethiopia, Ghana, India, Indonesia, Kenya, Mali, Niger, Nigeria, Philippines, Senegal, Tanzania, Zambia and Zimbabwe.

The couple now live on the shores of East Africa in Dar es Salaam, Tanzania with their children, Sophia Rose and Maximilian Ray. Dan is the country director for a U.S.-sponsored program to help Tanzanian community organizations speak out about their concerns to the government.

"I am busy consulting for women's rights and efforts to stop HIV/AIDS," said Craun-Selka.

"The people we work with are brave pioneers determined to make the futures brighter for children, the disabled, women, entrepreneurs, and the environment. Our job is to strengthen their capacity to achieve their dreams and then to get out of their way as they lead their own futures," she explained.

Craun-Selka said she has met many people who have made lasting impressions. "When I visited Bangladesh in 1998, I got to meet a real freedom fighter - a woman who cut her hair and passed herself off as a man to join her fellow citizens in their fight for freedom from Pakistan." After Craun-Selka told the woman about her high school efforts to send the senior money to Bangladesh, "she and her colleagues were so touched that we had tried to help from so far away," Craun-Selka said.

"Just a couple weeks ago I sat with a young Masaai guy who lives near the Serengeti and is working in an organization that advocates for pastoralist's rights. The Masaai are that wonderful African tribe whose warriors are famous for killing lions. Actually, the Masaai are the gentlest people who never kill wild animals - except the occasional lion who threatens their cattle - but live in harmony with them. This young man had come to Dar for a meeting and was seeing the Indian Ocean for the first time. It was great to walk to the surf with him and watch his fascination with the sand, seaweed and to marvel at the salty taste of the water. These are precious memories that I will always cherish.

"The lessons from growing up in Orange are also precious and have steered me well all these years. And of course, the lessons my parents gave me - to be curious about the world and to love people without judging.”

This story has been posted in the following forums: : Headlines; COS Tanzania; COS - Bangladesh; Service; HIV; AIDS