Excerpt from "The Ambassador's Son" by Uzbekistan RPCV Tom Bissell from Wild East: Stories from the Last Frontier 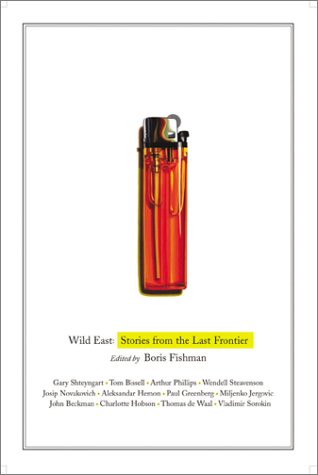 Excerpt from "The Ambassador's Son" by Uzbekistan RPCV Tom Bissell from Wild East: Stories from the Last Frontier

I liked the Capital because you could always find something to do there. Booze, women, dancing—you name it. As for the rest of the country, the guidebook writers could have the place. They didn’t even have toilets outside the Capital. Please realize I require very little as a human being: bread, water, flush toilet. Something about living on the cusp of the millennium and still shitting over a hole calls into question the entire concept of historical progress.

I’ll tell you a little about the country. It was one of the old Soviet republics where you started drinking at ten, started really drinking at fifteen, and dropped dead of it around fifty. The kind of place that was so corrupt that you had to bribe yourself to get out of bed in the morning. This wasn’t one of the European former Soviet republics; this was one of the Central Asian republics you’ve never heard of. As for the culture, I’ll say this: its combo of Soviet paranoia and Muslim xenophobia made red wine and fish look like peanut butter and jelly in comparison.

You didn’t see a whole lot of tourists hanging out in the Capital, needless to say, but there were a few Americans around. (There are always a few Americans around.) First, you had the Professional Expatriates at the Embassy. Their ranks were filled with a lot of uptight stuffed shirts, stuffed blouses, stuffed heads. Most of them couldn’t stray a block from embassy row without their cell phones, chauffeured cars, and International Herald Tribunes. Second, you had your Do-Gooders. These people, God bless ’em, needed a serious fucking clue. Each fall I’d see a new group of hatchlings turn up in the Capital, their first day in-country, snappily dressed, taking pictures with disposable cameras for Mom and Dad back home in Iowa and Nebraska and Michigan. Then they’d get shipped out to the villages. Three months later I’d see them back in the Capital shopping for Snickers bars and deodorant, crazed and dandruff-ridden. Finally, you had your Sharks, men and women whose in-country presence consisted solely of pocketing ducats. This wasn’t as evil as you might think, not even by folk-singer standards. After all, the more money the Sharks made, the more the country made (usually, in a perfect world), and then everyone was happy. Sometimes Sharks were Do-Gooders who’d stayed but got wise on how to live; sometimes they were Professional Expats who’d had their fill of Embassy politics; and sometimes they were twenty-four-year-old ephebes with liberal arts degrees pulling down seventy-five grand a year—tax free—serving as “consultants” for Price Waterhouse or Boeing or British-American Tobacco. As for me, I had an in-country sinecure but didn’t consider myself one of the Sharks. Although I was around the Embassy a lot no one would have mistaken me for a Professional Expat. A Do-Gooder, then? Hardly.

I was the ambassador’s son.

A dilemma: What do you do when you’re sunk to the hilt in the lovely, splayed spasm chasm of bent-over Olga, who to your utter, surprised delight is finger-diddling the lipsticky and raven-haired Svetlana, when suddenly you hear your mother coming down the stairs? Did I mention that these stairs and the darkened basement they lead to are found in a home belonging to the United States Embassy? Did I mention you live in this palace, which supplies for you a chauffeur named Sergei and an idiotically generous stipend? Finally, and most significantly, did I mention you’re two caterpillar-lengths away from an orgasm of Vesuvian proportions?

When the lights came on two things struck me. The first was that Olga had an American flag tattooed on her porky left rumpcheek. The other was the difficulty of the choice I suddenly faced. The light switch was found halfway down the staircase, so I knew I had a second or two to pull on my pants and do at least a modicum of damage control. But Svetlana was spread-eagled on a large purple leather couch, bent-over Olga was before her on her knees, and I was screwing Olga from behind—this is not an easy situation from which to extricate oneself. In all honesty, I was too close to destroying Pompeii even to have considered stopping. I suppose it would be fairly easy to second-guess my judgment but I’d never screwed two girls at once. My only defense is that you do not ask Columbus to turn around when the guy in the basket starts screaming “Land ho!”

How long my mother watched before I heard her outraged gasp I’m unsure. I should point out that I love my mother. She’d stuck with my dad through his long, often dreary embassy-to-embassy career. (“A diplomat lives the life of a dog,” Jefferson said, and he was in fucking Paris.) First, until it blew up, we were in Beirut, where Dad was a staffer; then we spent a tense decade in the Soviet Union, where Dad was an ambassador’s aide; then to Dad’s first real gig as American Ambassador to Afghanistan, which was about as much fun as you’d think; and then to our reward, the Capital. My mother was a woman who made an effort to learn the language of every country she traveled to. She shopped in the bazaars shoulder-to-shoulder with the locals. She cared. And this is what she had to see: an orgasmic Sveta hooting “Da, da!” and slapping the couch cushions with her hands, Olga’s finger rubbing her blood-swollen clit with the blurry speed of a hummingbird, and me, her son, ejaculating with enough torque to cross my eyes. When I was done—this process took a bit longer than I would have liked—I had no choice but to turn to her.

Mom was no shrinking violet. She’d been in bullet-peppered cars in Beirut, she’d had a rotten cabbage pitched in her face in Kabul, and by the time we locked pupils she’d composed herself. She wore a fuzzy white bathrobe with the American Embassy insignia embossed smartly into the breast. Her hair was flattened and color-drained to the shade of gray found only in black-and-white movies. Her eyes were dry and unforgiving. “Oh,” she said, except it was more of a sigh. “Oh, Alec.”

By now Olga and Sveta knew the score. They were huddled naked against each other, whispering in Russian. I draped a nearby blanket along the three of us, and we sat there, the girls looking at the floor and me looking at the girls while my mother shook her head. I didn’t care about Olga and Sveta, really. They were Russian strumpets I'd picked up in a nightclub. They didn’t care about me, either. All they wanted was a chance at the Alec Tuscadero Visa Application Program.

“Mom,” I said, vaguely remembering my mother’s oath after my urine showed simultaneous traces of cocaine, marijuana, and opium that it would be the Last Time she’d forgive me. She made that quite clear—it would be the Last Time, as opposed to the last time. You still have seven or eight “last times” left once you get that first one, but once you’re given a Last Time, it’s serious. (The drug test was on the request of the Embassy’s regional security officer, a doughy guy called—not to his face—Genghis Ron.)

“Alec,” she said again, closing her eyes, her face hardening.

I figured I had one chance to fix all this, to say the right thing. (Before I tell you what fell out of my mouth I feel it’s germane to point out that I’d spent the better part of the evening smoking Afghan poppy seeds that Sveta had seemed really surprised to find in her purse.) I put my arms around the girls, hugged them to me and said, “Two chicks at once, Mom.”

In a flash of fuzzy, hazy white my mother vanished from the staircase. The next thing I knew my ear was twisting between her sharp fingers. She pulled me to my feet, my pants still around my ankles, and dragged me trippingly across the room. At the stairs I turned and saw Olga and Sveta on the floor, on their backs, kicking into their pirated American blue jeans.

The Hotel Ta-Ta was a nice place. Built by Indian investors —anything built by Soviet architects had a tendency to fall apart—it relieved you of three hundred dollars a night for the privilege of stepping into its marble lobby and sleeping on its crisp, laundered sheets. I could afford it; I could have afforded twice that much.

The next morning, ten steps past the hotel fountain, I saw Sergei, my chauffeur, sitting on the hood of a gleaming, freshly washed white Toyota Land Cruiser, reading the Capital’s Russian-language newspaper. The night before he’d helped me haul all my shit into the suite.

“A, prekrasno, Alec,” he said, just about extinguishing our shared vocabulary. (I knew roughly enough Russian to fill the backs of two postcards.) Sergei folded his newspaper into a small square and held it pinned under his arm as he opened my door for me.

I fell into the Embassy-supplied Land Cruiser’s back seat and rubbed my hangover-tenderized temples. Seconds later Sergei was weaving through the traffic on Rashidov Avenue like an out-of-control darning needle.

In the rear-view mirror his vodka-reddened eyes flicked onto mine. “Amerikanskoe Café, da?”

“Where is he? Uh, gde moi otets? Do you know?” I knew Ambassador Tuscadero was in Kiev at a human-rights conference sponsored by all the former Soviet Republics. That morning on CNN International, though, I’d seen that a bomb threat had ended the conference three days ahead of time. Was he home, did he call, had my mother debriefed him?

“I no know,” Sergei said with the typical shrug that followed all his heroic efforts at English. “My father, I no know where is he.” He looked at me again in the mirror. “Khorosho, Alec?”

Still, after several months, I was pleased to see the fruits of Sergei’s and my daily five-minute English lessons. “Khorosho, Sergei. Great. To the café. Me want coffee now chop chop.”

“Chop chop,” Sergei said, shifting, and I sat back and watched the Capital’s weird, oppressive architecture fill the spotless square of my window, then, after a moment, slide soundlessly away. I dozed off for a few blocks and woke to the sound of Sergei beeping his horn at a big-bottomed Tatar girl wearing black stretch pants and a tight white T-shirt. She was standing on the corner of the trendiest street in town, the street on which one found the New World Café. Sergei turned around, grinning, showing me his mouthful of substitute gold teeth. “Alec,” he said, grinning. “Beeg tits, nice ahs, a?”

“Beeg tits, nice ahs,” he said, his hands up like scales, weighing the desirability of each description. He jerked the steering wheel over, slid into a space three hairs bigger than the Land Cruiser, turned and gave me a big thumbs up. “Beeg tits, nice ahs, I love America!”