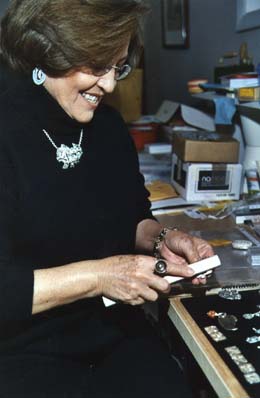 Caption: Alicia Fink, former Hilton teacher, polishes a sterling silver pendant. Alicia took up making silver jewelry about 2-1/2 years ago after taking a class in the craft at the Rochester Museum of Science. She has pieces at the Memorial Art Gallery and the B Younique Gallery. According to Alicia: "It's a great pleasure making jewelry and it really helps to have a very supportive husband and children."

It's often said that when a door closes, a window opens. This unique twist to life is what the stories in the soon-to-be released book entitled, It's Never Too Late to Plant A Tree, by Mel and Morrie Herlitzer, are about. The book features people who have rewarding and successful careers after they retire. Included are President Herbert Clark Hoover, President Jimmy Carter and Alicia Fink.

Alicia Fink? Yes, Brockport resident and native of Ecuador, Fink retired from teaching Spanish in the Hilton School District four years ago, thinking she was going to spend her days traveling and relaxing.

Alicia came to the United States from Ecuador to attend college and her family settled in Albuquerque, New Mexico. She came to Brockport right out of college to take a teaching position at SUNY Brockport training people who were going into the Peace Corps

Instead, she took a jewelry making class that changed all that. Using a material called Precious Metal Clay or PMC, she found she had a gift for designing beautiful ethnic jewelry pieces. Using New Mexico and Ecuador as her inspiration, she molds the clay and transforms it into pendants and pieces for earrings that sometimes include Petroglyphs from the ancient ruins in Ecuador.

The compound her jewelry is comprised of is 99% pure silver. After she molds it into the design she wishes, it is baked in a kiln for two hours at a temperature of 625 degrees F. It is then polished and/or antiqued to create the patina she wishes the piece to have. Her pieces range in price from $25 up to over $100. The clay compound she purchases from Japan but the gems such as rose quartz, topaz, turquoise she purchases from various places. New Mexico is a great place for her to buy some of these gems, she says.

Around the same time she was volunteering at the Memorial Art Gallery one afternoon when the woman in charge of the gift shop stopped to admire her necklace. "She wanted to know where I got it," said Alicia. When Alicia told her she made it, the woman was impressed and asked to see other pieces. She began to sell them on consignment in their gift shop.

"The same thing happened with the shop in Brighton and the one in Pennsylvania," she said. She now has pieces on consignment at Twelve Corners in Brighton in a gift shop called BeYouNique, and another in Boiling Springs, Pennsylvania. All three consistently sell out.

In addition to the shops, she hosts two shows a year in her home, in November and in the spring.

She doesn't do traditional craft shows but is considering the Clothesline Art Festival this coming summer. She will also likely have an online shop before too long.

It was her successful second career that caught the attention of the authors of It's Never Too Late to Plant A Tree. "A friend of mine is a cousin to these two brothers," she explained. "He asked me if I would be interested in being interviewed by these authors and if they liked the interview, I would be included in this book." They interviewed her over the telephone and then sent out a photographer to photograph her for the book. She was surprised when they decided to include her among only 65 others but she was shocked to see herself in the same book with former U.S. Presidents. She received an advanced copy of the book that is due out in bookstores soon.

Alicia feels her gift for designing this ethnic jewelry lies deep inside her Latin American roots. There are several extended family members still in Ecuador who are famous musicians and artists.

Not only is she a successful artisan, she is also an author herself. She and a colleague self-published an anthology of poetry from Ecuadorian women. It is in Spanish and translated into English. They spent seven years compiling this book and then gave copies to universities and libraries. Currently, the pair are working on a second book which will have male poets from Ecuador.

She also currently works as a supervisor to student foreign language teachers through the University of Rochester and she teaches her jewelry making in her studio in Brockport.

Alicia came to the United States to attend college and her family settled in Albuquerque, New Mexico. She came to Brockport right out of college to take a teaching position at SUNY Brockport training people who were going into the Peace Corps. She met her husband, who is still a professor at Brockport. The have two grown sons; one lives in New York City and the other recently moved to Los Angeles to work as a script writer. She visits her parents in Albuquerque, New Mexico several times a year and returns to Ecuador whenever she can.

This story has been posted in the following forums: : Headlines; COS - Ecuador; Art; Jewelery; Brockport Program