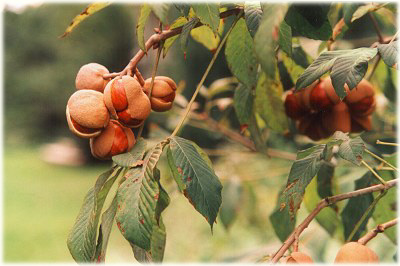 They're All Aglow for Chestnuts
You probably know of them from the song -- but most of us have never tasted them. A loose band of nut lovers hopes to change that.

LAWRENCE, Kan. — Charlie NovoGradac slides a dozen glossy chestnuts into his electric wok and clamps the lid tight. A sweet, smoky aroma curls out. The smell is subtle — and quickly overpowered by the emu meatballs simmering in spicy marinara the next table over.

But emu meatballs don't have a song.

At this country market, it's the chestnuts that draw the crowd.

"Chestnuts roasting on an open fire, Jack Frost nipping at your nose … " Jay Peters, browsing the poinsettias, bursts into booming verse as NovoGradac opens the wok.

"I don't even know what a chestnut is, much less what it tastes like," confesses another shopper, Amy Bennett. She presses close for her free sample. "I was just listening to Nat King Cole on my way over here," she says, "so it seems appropriate to give it a try."

NovoGradac grins. He's heard it all before. He'll hear it all again, with good cheer. Anything to get Americans to think chestnuts.

The starchy nut — which tastes a bit like sweet potato, with hints of roasted corn and unripe pear — was a staple food for Native Americans. Colonists in the forests of Appalachia also relied on it for winter nourishment. But a disastrously fast-spreading blight killed almost all the nation's chestnut trees in the early 1900s.

So, few Americans have ever tasted fresh chestnuts. NovoGradac has made it his mission to bring back the glory days.

He's joined by a loose band of plant breeders, farmers, agricultural engineers and nut lovers around the nation. Some want to revive the chestnut as an East Coast forest tree, providing timber and forage for wildlife. Others are determined to turn the nut into a profitable crop for farmers from Delaware to California; it can grow in almost any climate, as long as the soil is acidic and well-drained.

"Most people only know chestnuts from the song, or they have a vague feeling that chestnuts go with stuffing," said Michael Gold of the University of Missouri's Center for Agroforestry. "I want consumers to be walking into stores asking managers: 'Where can I get them?' "

It might seem a hopeless crusade. There are only about 150 chestnut growers of any size in the United States; few of them turn much profit. Americans import $40 million worth of chestnuts annually, mostly from Italy. But that amounts to about an ounce, or two or three chestnuts, per person. (Per capita consumption in Korea, by contrast, is four pounds.)

Nutritionally, chestnuts are starchy, a lot like potatoes or grain — not the best fit for today's carb-counting dieters. Though they're low in calories and extremely filling, they have none of the heart-healthy fat found in other nuts. In fact, they're more closely related to acorns than to almonds.

They're also a nuisance to handle: They must be refrigerated, scored with a knife before cooking and peeled while the tough outer shell and inner skin are still fingertip-charring hot. They can be eaten raw, but they're better cooked, and best fresh from the roaster.

"It's definitely not for those who think food grows in the freezer, wrapped in cellophane," NovoGradac said.

Chestnuts are treasured most in Asia, where they have grown wild in abundance for more than 2,000 years. The Chinese slow-cook the shiny brown nuts by raking them through hot gravel again and again, sometimes adding sugar to bring out a perfumed sweetness. Koreans so value them that they're incorporated into traditional wedding ceremonies: The groom's mother tosses chestnuts and dates at the bride to bless her with fertility.

Europeans, too, eat chestnuts by the pound, gathering them from orchards that in many cases were first planted by conquerors from the Roman Empire.

During World War II, chestnut flour was often the only flour to be had; the French and Italians grew so tired of it that they stopped tending the tangled forests of wild chestnuts as soon as they could buy wheat again. In the last decade, though, younger generations across Europe have rediscovered chestnuts.

They're sold fresh-roasted in wintry town squares from London to Paris to Munich to Rome. They're pounded into a flour to make thin pancakes, or pureed into soups and pastries. Portuguese families boil them for snacks. Italian families make a ceremony out of burning the pruned branches of the trees after harvest.

"All over Europe, there's an incredible comeback for chestnuts," said Lucienne Grunder, who learned to love the winter treat in her native Switzerland. A transplant to California, she now owns the largest chestnut farm in the United States: 9,000 young trees spread across 85 acres in the San Joaquin Valley.

When the trees mature at about 10 years, Grunder expects to harvest at least a ton of chestnuts per acre. In theory, that could translate into $6,000 in gross revenue per acre, more than 10 times the income expected from corn, and about equal to that of walnuts.

To expand the market, Grunder holds cooking demonstrations locally and presses her recipe for chestnut mont blanc on upscale chefs.

"Puree the chestnuts with milk, cream, vanilla and sugar," she explains, "then pile it all on top of a meringue."

Grunder's efforts to sell Americans on the old-fashioned charm of her old-world crop are part of an increasingly aggressive public relations offensive.

Roasted chestnuts sold in paper cones long have been a holiday tradition on street corners in New York, Chicago, San Francisco and other cities, especially those with large Asian populations. Now, growers are pressing vendors to set up small roasting stations in more out-of-the-way places, such as Boise, Idaho.

"We want Congress to make it official," said Harvey Correia, a California grower, "but I guess they've been too worried about the war in Iraq."

In the most ambitious marketing effort, six professors at Michigan State University have set out to make chestnuts as easy to use, and as common, as walnuts.

The university works on a variety of agricultural commodities — cherries, apples, even asparagus — to boost the state's rural economy. But the chestnut team has perhaps the toughest task.

In the department of agricultural engineering, Daniel Guyer tinkers with an imported $90,000 contraption — a flame-blasting, shell-thrashing hodgepodge of belts and bins — in search of a quick way to peel chestnuts. In plant pathology, Dennis Fulbright breeds varieties suited to the Michigan climate and donates hundreds of pounds of chestnuts to culinary schools, hoping to hook young chefs.

Here in east-central Kansas, NovoGradac does his bit for the cause by hauling his wok from farmers market to country store during the peak chestnut season, from mid-October through mid-December. At every stop, he dishes out fresh-roasted chestnuts — and nostalgia.

"Boy, does this bring back memories!" Hank Louisa said at a Christmas open house sponsored by Pendleton's Country Market in Lawrence.

"My parents used to sprinkle water on chestnuts, put them on a tin pie plate and stick it in the fire," Louisa said. He chewed on a warm nut, smiling. Then he picked up a mesh bag full of the jumbo organic chestnuts so he could share the tradition with his boys.

"I think of this as a public service," said NovoGradac, who calls himself Chestnut Charlie.

Tall and lean, with a sharp nose and hooded eyes, NovoGradac, 53, spent three decades in Micronesia as a Peace Corps volunteer and a lawyer before moving to Kansas eight years ago to be near his ailing parents. He and his wife bought 20 weedy acres in this college town, best-known for its weekly "Honk for Hemp" demonstrations by the pro-marijuana crowd.

Out of a vague notion that trees add beauty to the world, NovoGradac decided to plant an organic orchard on his patch of flatland just off a busy street.

Bigger growers had the walnut market sewn up. Hazelnuts and pecans didn't do well in the cold. So NovoGradac planted several hundred pines and firs for a cut-your-own-Christmas-tree lot. Then, a nursery owner convinced him that Chinese chestnuts might take to the Kansas climate. Intrigued by the novelty, NovoGradac planted more than 1,000 seedlings.

"I had never even eaten chestnuts before," he said. "Good thing I like them."

Before the blight, fully a quarter of all Appalachian forest trees were chestnuts. They grew by the billions from Canada to Georgia, decking the hills with a snow of white blossoms in spring. Prized for their lumber, the majestic trees reached 100 feet tall, 12 feet in diameter. The chestnuts ripened in prickly burrs that fell to the ground, splitting open in a drumming rat-tat of bounty each autumn.

A Web site sponsored by the American Chestnut Foundation features the wistful reminiscences of 80- and 90-year-olds who used to awaken on brisk October mornings to the sound of chestnuts plunking against tin roofs. They'd scramble to collect them in lard cans for cozy snacks by the fire, and also for barter: A gallon of chestnuts would buy three pounds of sugar.

"I have to deal with it professionally, so I suppress my emotions about it, but there's a romance associated with the tree," said Fred Hebard, a plant pathologist with the foundation.

With 5,000 members and an annual budget of $1 million, the nonprofit foundation aims to restore the American chestnut by breeding trees that can resist fungal blight, which is still endemic in Appalachian soil. "We won't see anything close to a full resurgence for 100 years or more," Hebard said, "but we hope to get started within the next 10 years."

In the meantime, chestnut growers plan to keep pushing for new customers. They figure they have one sure thing on their side: Cole's recording of "The Christmas Song."

The much-loved standard was written on a whim in 1945 by 20-year-old singer Mel Torme and lyricist Robert Wells. On a blistering summer day in Southern California, Wells was jotting down phrases that reminded him of winter to try to convince himself he wasn't sweltering. Torme took a look and immediately heard a Christmas classic. The pair dashed off the song in half an hour, collaborating on music and lyrics.

Torme, as it turns out, was not a big fan of chestnuts. Or if he was, he never shared them with his kids.

"My dad loved Christmas, but the whole thing about chestnuts roasting on an open fire was never even discussed in our family," his son Tracy recalled.

"We were more the tiny tots with eyes aglow," his daughter Daisy said, "finding it hard to sleep."

Still, by writing them into the first line of "The Christmas Song," Torme turned the chestnut into an icon of the holidays.

Since Cole's version came out in 1946, "The Christmas Song" has been recorded more than 1,500 times, by everyone from Harry Connick Jr. to 'N Sync to Hootie and the Blowfish.

Fulbright sees the song's impact every time he sets up a roasting booth at a winter festival. He's always mobbed by customers. And someone is sure to be humming.

"Many people say it's the first chestnut they've ever tasted," Fulbright said. "But they know they've been singing about them all their lives."

This story has been posted in the following forums: : Headlines; COS - Micronesia; Chestnuts; Forestry