Natalie Teske in the Peace Corps in Nepal 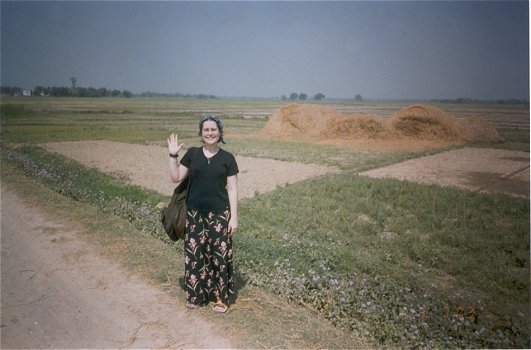 Natalie Teske in the Peace Corps in Nepal

So, last Monday began a three day Nepali/ethnic wedding. (because half of the family were Doteli, the orginal people who lived in Nepal). It was the wedding of my best Nepali friend and also my language tutor, so now, I lack the ambition to progress past chapter 11 of my nepali text book, but that's getting way ahead of myself. So, I spent Monday night with her. Her name is Lalita, and on Monday night, it was kind of a bachlorette party--you get henna on your hands and feet and do your nails and stay up all night talking about boys and your soon-to be married life. The next day, Lalita sat in one room in her red wedding sari with a red veil while her relatives came in all throughout the day and washed her feet and asked for her blessing. That afternoon, her future husband arrived with all his friends and family in a bus with a big band playing in front of them, with men dancing with the band; as you can imagine it was a very slow procession. There's Nepali food set out in a big tent with chairs--this includes rice, lentils or beans, spinich with a sort of a cheese between yoghurt and roticca (sp?), fresh veggies, sweet rice, kind of like rice pudding, and a dip of unsweetened yoghert with chilis and silantro in it. For desert, there's kind of a super-sweet donut hole with sugar syrup. I had two plates of the beans and the spinich; they were quite good. Anyway, this whole day, the groom and the bride are kept apart. At one time, when Lalita had to go to the bathroom, all the girls, including me, (her ladies in waiting) got up with her and we made a circle around her so the bridegroom couldn't really see her. After this, there is dancing, and, with much pressure (because I was dressed in a sari), i got up and danced with some children. I was a HUGE draw. I don't think that these people had ever seen a white person in a sari, much less one who danced. The 20 or some children who were there also followed me constantly, always wanting to look at the henna on my palms, or hold my hands or examine my fingernails, which i hadn't gotten around to cutting, which seemed to entrance them. Lalita had about 600 people at her wedding, and many of them had to walk two or three days to get there, so they cleaned out their big chicken house (her father's a chicken farmer) and put mattresses down and that's where everyone slept. But, the second night, no one sleeps. Everyone stays up and sings hindi songs and blows a conch shell every hour asking for blessings upon this marriage. I think it also has the added value of keeping the bride's mind off her future--as most marriages in Nepal are arranged marriages, and so was Lalitas. But, as she told me several times, she was not sad about the marriage--only that it had to happen so soon and would take her away from her family. In Nepal, marriage is a fact of life, something that you cannot escape, and that you shouldn't want to. If you are female and still unmarried at 30, well, then, you are a failure. Lalita was 20; her family considered her quite old.

Anyway, I did not sit up all night with them singing--besides not knowing the words, I was now sick with food poisioning and spent the next 10 hours hearing the conch horn from my bedroom while I alternately dry heaved and rushed to the toliet. By the next morning, I was already getting better, but still in no shape to go and see the ACTUAL wedding, more's the shame. But on this third day, I did go out and say good bye to Lalita as she was in the jeep, behind the same band that was going to lead her to her husband's house. She was crying like someone had died. Two days later, I saw her again, and she seemed subdued but not unhappy. I am to call her husband my "brother in law".

So, Now, I can add food poisioning to my list of GI "have hads" which would include: bacterial dysentary, 2 times; bacterial dysentary and amobeic dysentary at the same time: once; Giardia, once and food poisioning, once. The only things I have left now are cyclyspora and worms (this includes hookworm, ring worm, pin worms and tape worms), and I hope I can avoid the worms, although they make you the LEAST sick, they're the MOST gross, I think.

this is my second try at a letter--I tried earlier this week, but there were computer errors and so I ended up having to pay for an hour of computer time with having spent half an hour typing this e-mail. So, I was mad, and left and came back to it in a couple of days.

Last tuesday, my practice teaching finally ended. I was counting the days--I had 80 kids in my 5th grade and 130+ in my 6th grade. The school had 400 kids, so I taught half of them every day. Just 10 days on that many students was enough to burn me out; I'm glad my school only has 250 students all together and each class doesn't have more than 30.

Tomorrow is my swearing in! I will now be an official volunteer. Those of you who are sending me snail mail, please now put PCV after my name instead of PCT: "Natalie Teske PCV N-196" everything else is the same. Because, tomorrow, I will actually be a volunteer! And then, on the day after tomorrow, I will be going to site in a Peace Corps driving jeep with another PCV who will be living half an hour from me, and all of our stuff will go with us--that's why we're not going on a bus or plane--we have too much stuff. PC gave us each, all 22 PCTs, mattresses, plus everything that we brought from the US, everything we have bought here, and other things PC has given us, like TONS of forms, binders and papers. Enough to fill a trunk, which they have also given us.

I can't think of any other news--oh, my ama (mother) gave me some sandals to wear with my new sari. I got a silvery lavender sari to wear to swearing in. Wearing a nice sari here is like wearing an evening dress at home. When my ama gave me the sari, she said, "Your sari is beautiful. Your orange sandals are not. Wear these. They are for you." It's true. My orange teva sandals ARE NOT beautiful, even when they were new from america, and now, that they've been indoctoriated into Nepali life (cess pools, garbage, cow manure, charpis, bugs...) they are even LESS beautiful. Of course, I wasn't planning on wearing them. Who ever thought of orange and purple together?? (Oh, I know. Nepalis...they put ALL sorts of colors and patterns together) I think it was more the style and cleanliness of my sandals that my ama was commenting on. Not the color. Although the new sandals she bought WERE black, thankfully. Because, even if they weren't, of course I would have to wear them anyway.

That's the news. The next time you hear from me I'll be in Mahendranagar, but my mailing address is the same!