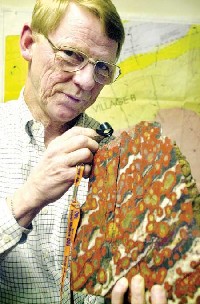 Showcase Man of the Year Peter Anderson doesn’t know if his deep need to help others comes from a stint in the Peace Corps - in Nigeria - or if he always meant to meet the Platonic ideal of “volunteer.”

“I do what I do because it needs to be done,” Anderson said after hearing of the annual Chamber of Commerce award for service to the community and after he recovered from being stunned with surprise.

“You live in a community, you become a participant in that community, not just a resident,” he said.

Anderson is a modest man - his own opinion - and is a bit uncomfortable being front and center on the Morgan Hill stage.

Rotary, the Historical Society, the Chamber and local business, the American Association of University Women, among others, all bask in the glow of Anderson’s long-time attention.

The Morgan Hill Rotary Club’s International projects are closest to his heart and he has headed up or helped with several.

Morgan Hill Rotary fundraising - in partnership with Rotary clubs in the beneficiary country - bought textbooks for a school in a disadvantaged Buenos Aires suburb, helped to build a library in Ghana, built houses in flood-damaged Honduras, bought medical equipment for a clinic in India and currently are rehabilitating an orphanage in Oruro, Bolivia and working with Saint Louise Regional Hospital to secure other equipment for an Argentine clinic.

Anderson’s affinity for Spanish-speaking countries may come from his wife of 32 years, Elena, who is from Argentina. The couple spends several weeks every year over Christmas and New Year’s visiting her family. In self-defense, Anderson once said, he learned Spanish.

The Morgan Hill Historical Society is another organization that is pleased that Peter Anderson moved to town.

“I was watching a city meeting on TV in 1992 when the city sold Villa Mira Monte (the old Morgan Hill House, built in 1886) to the society for $1. I called Scott van Keulen (then the society’s president) and offered to do any geotechnical work on the foundation (for free),” he said.

The house had been red-tagged, damaged almost beyond repair from 100 years of use and from the 1989 Loma Prieta earthquake. Red tagging means “no entry” and requires reconstruction or destruction. The city did not have the resources to save the house and the society said it did.

He was eager to share credit with saving the house with other members of the committee, Charles Weston, Jim Fruit, Loni Davis and Gloria Pariseau.

The renovation of a sturdier Villa Mira Monte was completed in the fall of 1998, after only five years of fundraising and work though the Redevelopment Agency was able to contribute enough funds to paint the building’s exterior and landscape part of the property.

Though he refers to himself as “a dirt guy” referring to the geologic study of soil, rocks are really his thing and, recently a special rock got his attention.

Poppy Jasper is only found in Morgan Hill, according to the Smithsonian Institution, and Anderson. The story begins with another friend, Rick Page.

“Rick and I were talking after the July Fourth parade when he mentioned seeing a museum quality piece of Poppy Jasper in a Cupertino rock shop,” Anderson said. “It was going to be cut into small pieces so we got the idea to do something.” And do something, he did.

The large orange-brown rock with the distinctive “chicken-pox-like” circles is now happily ensconced in a custom-made display box in the community center lobby. Anderson helped to raise funds to buy the rock, get the display case built and the rock polished - with help, he insists, from Page, Bill Tykol, Ruth Johnson and Evelyn Kobayashi.

“It seemed to strike pleasant chord and hit the right note because, after we presented the rock to the community, the City Council adopted Poppy Jasper as the official city rock.”

The Poppy Jasper name has taken off, with a room in the community center and an upcoming film festival both named for the rock.

“I’m pleased that the little idea in the park led to something that will be our collective heritage,” he said.

“Peter is also an active member of the Chamber of Commerce having served a three-year term as Board Director,” Minnich said, “is currently the Chair of the quarterly Big Business Forum and sits on the Economic Development Committee and Economic Development Business Attraction Committee. He is also a large supporter of Leadership Morgan Hill, member of the Morgan Hill Sister City Committee and supports many Live Oak High School programs.”

Anderson grew up in Menlo Park, graduated from Menlo-Atherton High School and Colby College in Maine with a degree in geology, then entered that formidable arena, the middle school classroom where he taught earth science. But after a few years, he left the classroom, moved back to California, earned a master’s degree in engineering geology and started Pacific Geotechnical Engineering, a private company in Morgan Hill.

“I decided I wanted to do it instead of just teach it,” Anderson said. Owning a business came with useful flexibility.

Anderson said the award has caused him to think about helping the community he’s lived in for more than 30 years but stresses that he is not alone in volunteering.

“I have yet to come across a society with such a strong volunteer ethic,” he said. “This community wouldn’t be half of what it is without this incredible outpouring of citizens who volunteer their efforts. Not just Rotary; not just the Chamber. It doesn’t get done unless you all show up. This is my community and I want to help.”

What does the future hold? Anderson said he would like to retire in a few years and - what else? - devote more hours to his pet projects.

If, as a clever person once said, helping others is the rent we pay to be here on earth, Peter Anderson is paid up for a couple of centuries.

Carol Holzgrafe is a reporter at the Morgan Hill Times. She covers all local news, including City Hall.

This story has been posted in the following forums: : Headlines; COS - Nigeria; Awards; Service

I Love this Website. It Great what people do for their Communities and even greater is what others do for communities that are not theirs.