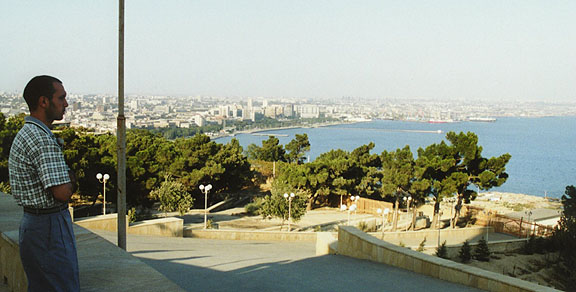 Recently, Azerbaijan gave an historic welcome to its first group of Peace Corps volunteers during a swearing-in ceremony in the coastal city of Sumgayit. United States Ambassador to Azerbaijan Reno Harnish helped to officially inaugurate 26 new volunteers into the Peace Corps.

In addition to the ambassador, the swearing-in ceremony was attended by the Peace Corps Azerbaijan Country Director Bill Levine, the Sumgayit Mayor Vagif Aliyev, the Azerbaijan Deputy Minister of Education Elmir Qasimov, and principals of the schools in which the new volunteers will be working. Also in attendance were 14 returned Peace Corps volunteers from other nations who are now working with development agencies in Azerbaijan, members of each family that hosted a volunteer during their three month training period, and the Azerbaijani Language and Culture Facilitators (LCF's) who helped the volunteers adjust to their new home in the country.

"These are really special people," Country Director Bill Levine said of the new volunteers. "They're bright. They're committed. They embody the pioneer spirit that a first group needs to have. We're all really proud of them and confident that they will set a very high standard for subsequent groups of volunteers."

During the ceremony, three freshly minted volunteers spoke, as well as volunteer Amy Peterson who astonished the crowd of 167 when she gave a speech in Azerbaijani, a language that was completely foreign to her three short months ago. At the conclusion of the ceremony, the volunteers joined voices with the LCF's to sing the American and Azerbaijani national anthems.

The Peace Corps has already established successful programs in many of Azerbaijan's neighboring countries in central Asia. The Azerbaijani government has expressed a strong desire to host Peace Corps volunteers and is one of five new countries that have begun a partnership this year as a part of the Peace Corps' ongoing effort to expand its number of volunteers. The other new programs are in Fiji, Swaziland, Albania, and Chad.