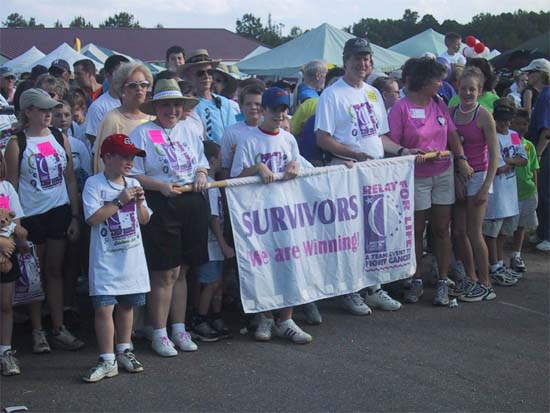 Nina Davidson Arnold, 63, has been coping with ovarian cancer for nearly six years, as she continues to work and go on with her life.

You can read about her inspiring struggles with the disease in her book, "Living with Ovarian Cancer: A Time for Truth, Hope and Love" (Morris Publishing, Kearney, Neb., 88 pages, paperbound).

A fiber/collage artist who still occasionally exhibits her work, Arnold was born in Chicago and grew up in Carrier Mills. Her husband, Dennis, retired from a teaching position in Kewanee in 1993. They have a son, Anthony, and daughter-in-law, Aimee, who live in Omaha, Neb.

In 1994, the Arnolds moved from Kewanee to Lake of Egypt, where she had established a studio. A year later, they built a new house in Johnston City, Dennis's home town, where they still live.

Nina Arnold had a successful career in textiles, mostly weaving, following a two-year Peace Corps stint with her husband in Afghanistan during the 1960s.

Since then, they have traveled widely in the United States, exhibiting her work at local and national art shows from April through November each year.

During the 1990s, however, Arnold's health deteriorated. To conserve her strength, she switched from weaving to less stressful fiber and paper collage artwork.

It was in May 1997 that she was diagnosed with stage IV ovarian cancer, which means that the disease had already metastasized and traveled to other parts of her body.

ADVERTISEMENT
She started to keep a journal of her battle with cancer, which helped greatly over the two years it took her to write her book.

In the first entry, May 24, 1997, she noted that she was somewhat fearful about her upcoming surgery -- her first -- but that she hoped her husband's support and her religious faith would see her through.

That first surgery -- a total abdominal hysterectomy -- was 90 per cent effective, she later wrote, leaving two inoperable spots of cancer, one on her liver and one on her diaphragm that required postoperative chemotherapy.

So she started on the first of 10 different courses of chemotherapy over the next 51/2 years. She lost her hair within two weeks and eventually became adept at wearing wigs and hats.

"I attempted to deal with the disease by enjoying any pleasurable moment that presented itself," she wrote. "I relaxed on the deck, practiced the piano, visited with friends, and spent time in my studio creating artwork."

Eventually, she sold her Lake of Egypt studio and worked in a new studio her husband built for her in their Johnston City home.

The book, with excerpts from her journal, explains in detail her various medical problems and the treatments she underwent to keep them in check.

Ovarian cancer is a chronic disease, she explains, that can, in many cases, be treated for a long time. Survival rates vary, but may be as long as seven years with proper treatment.

"A healthy attitude toward coping was always more positive than the occasional mood of despair," Arnold wrote.

A crisis in her situation occurred with the deterioration of her gall bladder as the result of side effects from her treatments.

Removal of her gall bladder involved a 15-day hospital stay in St. Louis for an operation that normally would be a one-day affair.

Since 1997, besides the chemotherapy, Arnold has undergone 82 radiation treatments, but the disease has never gone into remission.

Nevertheless, she has been able to do some work and some traveling, including visits to her son and daughter-in-law in Omaha (they have also visited her many times).

Much of the cost of her extensive medical and hospital treatment has been paid for by her husband's health insurance from his teaching position, she said.

Arnold has been distributing copies of her book to libraries and to cancer treatment centers around the country, she said on Monday, so that others in her situation may have the benefit of her experiences.

The book also may be bought at Bookworm bookstore in the Eastgate Shopping Mall, Carbondale, or online at Amazon.com.

In a recent entry in her journal, Arnold wrote:

"Looking back at the past six years, I am thankful for the opportunity to have lived and to have enjoyed time with my family. I look forward with hope to the future. I encourage anyone with cancer to maintain a positive attitude and to trust in the possibilities of today and tomorrow.

"Life is worth living!"

BEN GELMAN is the former Sunday news editor for The Southern Illinoisan and is an avid bird watcher.

This story has been posted in the following forums: : Headlines; COS - Afghanistan; Cancer; Writing - Afghanistan