An Interview with Swaziland RPCV Reed Hastings who has built Netflix, a red-hot company with phenomenal growth 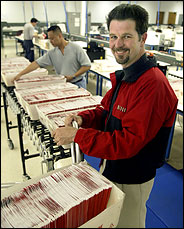 An Interview with Swaziland RPCV Reed Hastings who has built Netflix, a red-hot company with phenomenal growth

Netflix CEO Reed Hastings has built a red-hot company with phenomenal growth. That must be why both Wal-Mart and Blockbuster want to eat his lunch.

Like the landmark Silicon Valley companies which preceded it (Hewlett-Packard, Shockley Semiconductor, Apple, and Netscape), Netflix is a small firm that is making big waves.

The company’s simple offer – for $20 per month, subscribers can rent unlimited DVDs by mail, with no due dates or late fees – has already drawn copycat services from big dogs like Wal-Mart and Blockbuster. And why not? Film buffs have gone wild for the service, which offers more than 15,000 titles. In the fourth quarter, Netflix boasted nearly 1.5 million subscribers, up 74 percent over last year. Revenue for the third quarter (fourth quarter results hit on January 21) was $72.2 million, up 77 percent year-over-year.
ADVERTISEMENT

Netflix CEO Reed Hastings, 43, has a habit of shooting for the stars. He founded his first company, Pure Software, in 1991. Within six years it was one of the 50 largest public software companies in the world. Later that year, the former Peace Corps volunteer sold Pure to Rational Software and with other colleagues formed Netflix. Today, he is creating one of the hottest companies in the tech industry.

Red Herring: Netflix started off with a unique business model, but the copycats have honed in. Wal-Mart has co-opted it. Blockbuster, too. How do you compete with those giants?

Hastings: Well, we have 95 percent market share in this space, so that's a good start. But it's got to be more than that. We’re focusing on understanding the unique place of movies in popular culture. Movies are not toothpaste. They are not razor blades. They shape our lives. They help determine who we are. So if we were selling a commoditized product and a company like Wal-Mart or Blockbuster or Amazon.com came into our market, it would be terrifying. But this is not just a packaged good. People have a much deeper emotional connection with movies and our brand. We have spent a lot of time thinking about how we can represent this love of movies.

Red Herring: What have you come up with?

Hastings: First off, we have invested over $100 million in building our brand and the systems behind it. We are great operationally. We ship and receive a half-million DVDs per day. It’s a major logistical challenge for anyone to compete with us. We've opened 20 distribution centers to get more movies more quickly into the hands of our customers. So they interact with us more. The DVDs also come in a great little red envelope. When people see it, they know they’re about to enjoy a new movie.

We have also created a great user community, built around the movies people love. Other users will recommend movies you’ve never heard of. So you’re constantly discovering little gems.

Red Herring: How is customer loyalty? What’s your churn?

Hastings: Three years ago it was 10 percent per month. It was down to 5.2 percent last quarter.

Red Herring: What’s the average time a customer stays with you?

Hastings: About 20 months. And customer acquisition costs are pretty low, about $30 to $35 each.

Red Herring: So what happens in a year or two when Wal-Mart says “Why don’t we just buy Netflix?” Is there an exit strategy?

Hastings: Well, can you name even three companies Wal-Mart has bought?

Hastings: That’s because they’re not acquisitive. But let’s pose the question more abstractly: What if Yahoo or AOL came to the table with an offer? We must do our duty to shareholders, so I cannot rule out the possibility of a buyout – that is not my right. But we are definitely focused on building a big standalone company. We are going to work really hard to stay independent. That’s the fun and joy of it. Wal-Mart and Blockbuster must also realize that we are not going anywhere. We are pretty darn good at what we’re doing, and we’re going to stay and fight them.

Red Herring: How big a threat is video on demand?

Hastings: Industries often obsess about the wrong problem. In the movie industry, people have obsessed for 20 years about wired delivery and how it would create magical efficiencies. Sure, it is going to be a little bit more efficient, but it focuses on the wrong problem. What’s the most inefficient part of movies? Not the delivery mechanism. It’s in creating demand. So let’s say I go off and I make a movie. The most expensive part for me is getting 100 million Americans to watch that film – the marketing dollars. You have to create a national brand around a $7 “consume-once” experience. That’s wildly expensive. So very few people succeed at it. Our biggest opportunity is hooking up the right people with the right movie. Suppose there are 2,000 movies made this year. About 400 of those are Hollywood movies, but most consumers will only hear about 10 or 20 of these pictures. And it's not necessarily the right 10 or 20 – just the biggest. So the big play for Netflix is connecting consumers and studios. If every studio could find its audience much more efficiently and if every customer could find movies they love, there is a tremendous value for the studio and the viewer.

Hastings: Anywhere people love DVDs and are willing to pay for them. So we have to watch out for the countries where piracy is rampant, but we’d certainly like to go into Japan, Korea, Europe, Australia.

Red Herring: How big of a concern is movie piracy?

Hastings: Huge. Certainly one of our biggest over the next 20 years. If piracy guts the movie industry, it guts us. And we should do everything we can to make sure that doesn’t happen.

Hastings: By offering a legal alternative. By making that alternative cost-effective and making it work. So that’s the little part we play in it.

Red Herring: Netflix provides a chance for a lot of obscure films and obscure filmmakers to get seen. Do you think the service will ultimately change filmmaking?

Hastings: It’s already happening. We are creating markets, because we are buying films from small studios and giving them distribution. Because of our large subscriber base, we can create markets of 10,000 or 100,000 customers for small films that may never have been seen. And the people who do see the movies will promote them to others.

Red Herring: Any chance that you could become a movie studio? Have filmmakers approached you to be their exclusive distributor?

Hastings: Well, no. We want to work with the studios, because they know how to handle the international markets and DVD sell-through. They know how to handle all kinds of important things that we don’t do. We’re a channel. The difference between a studio and a channel is that we specialize in one vertical expertise, and then a studio has to figure out how to market and develop all the channels.

Hastings: We’re still a small fry. This year, we will do about $300 million in business. That’s not bad by Silicon Valley standards, but will only represent about 3 percent of the domestic video rental market. We’re just scratching the surface. We’re focused on how to get from 1.5 million customers to 5 million – then 10 million. One day, we’ll get into downloading movies. Online delivery. Somewhere between 2007 and 2009, we hope to hit $1 billion in revenue. We’ve got a monster huge market ahead of us.

This story has been posted in the following forums: : Headlines; COS - Swaziland; Business; Silicon Valley; Computers; Internet