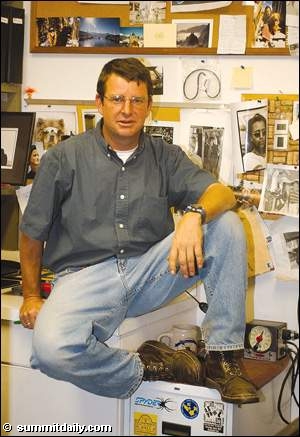 Click to Enlarge
A cattle herder in western Uganda looks after a herd of cows for a local farmer. The boy lost both his parents to AIDS and could no longer go to school because he has no way to pay school fees. Instead, he is given food and 5,000 shillings a month - about $2.50 - to tend the cows seven days a week, every day of the month. He is not alone in his plight. Thousands of Ugandan children have been orphaned to the AIDS epidemic.
Summit Daily/Brad Odekirk

Brad Odekirk
January 11, 2004
Editor's note: Late last year, Summit Daily News photographer Brad Odekirk took a two-month sabbatical and traveled to Uganda to consult with a family on sustainable farming practices. In the second of a two-part series, Brad speaks about the triumphs and tribulations he encountered on the farm.


One hour into our hike around the minister's vast, 7-square mile farm, we happened onto a young boy who was tending a herd of cows.

His first reaction was to retreat into the bush and take cover, for he was grazing cows on land that wasn't his.

The minister's guard, who was shouldering an AK-47, quickly flushed him out, and he shyly returned to a small fire where he was cooking a lunch of roasted plantain.

The minister's chief lieutenant in Hoima, Maja Magie, told him he was on the minister's property and asked whom the cows belonged to. Then he asked the boy to take us to the minister's old home, which was sacked during the Idi Amin era and slowly being swallowed up by a tangle of bush.

When Amin ruled Uganda, most of the country's elite and educated went into exile, as the relatively uneducated Amin felt threatened most by intellectuals. The minister fled to Kenya, where he stayed for seven years.

The minister had long abandoned this farm, and squatters had long ago started encroaching on its fringes with their fields of cash crops and banana orchards.

However, land reform and new tax laws, which will soon be mandated across Uganda, have caused the minister to revisit his vast farm in western Uganda. The government wants property owners to put their land to use or be penalized with higher property taxes.

Thus, I went to Uganda to consult with the minister, and particularly his son, Bernard, who also had a farm in the same district.

Along with his wife, Susan, they solicited help through a Peace Corps newsletter I receive monthly.

It read: "Position available with Karongo farm in Western Uganda. An African couple is setting up a coffee and tea farm to serve as a model farm and training outreach unit. They are not a business and not an NGO - just a husband and wife who are concerned about poverty levels in their district and feel they can establish a venture which will serve as a learning tool for modern agriculture. Farm size: 600 acres. Duties: farm management; setting up basic irrigation and nursery beds; establishing a community outreach system."

"That sounds right up my alley," I thought. Early in the 1990s I served as a Peace Corps volunteer in Thailand working in sustainable agriculture - mostly promoting fruit and fuel wood trees, but also banging the drum for diversified farming.

Though they were looking for someone for a two-year commitment, after corresponding for a few months via e-mail, we agreed that I would come for two months, more as a consultant than a farm manager.

I have had a deep interest in farming ever since I worked on an organic farm in Santa Barbara during my university days. I also wanted to spend more time in Africa (I spent a month in West Africa in 2000), and so it seemed the stars were falling in line for me.

The Summit Daily graciously granted me a two-month leave of absence.

Because Bernard and Susan's farm was still basically bush and the farmhouse still months away from being complete, I stayed at the minister's other farm at Kitoba, where his house survived the looting and ransacking of Amin's army and was still structurally sound. With some repair work and years of planting trees and growing fruit orchards, it was now quite comfortable.

The minister, as I call him, and whom everyone I met referred to him, is Henry Kajura - the deputy prime minister of Uganda - one of president Museveni's confidants and close friends.

Though my room didn't have running water for a shower, it did have a working sink and toilet and two comfortable beds. Outside the room was a large veranda that looked out over the fruit orchards, where two fat pigs and a clutch of chickens scrapped for food and made abundant noise in the early morning hours.

Because I had come at the tail end of Uganda's 10-month rainy season, we did very little planting, save for 100 or so pine and cypress trees and about 1,000 coffee trees we planted on Bernard and Susan's farm.

I spent most of my days walking the farms with the minister's farm manager, James, who had years of experience managing coffee plantations in his native Kenya.

As the weeks wore on, I came to the realization that because Uganda is so blessed with good, fertile soil and abundant rain, it was also somehow cursed by that great fortune.

I will try to explain. You rarely see malnourished children in Uganda. There is plenty of food, and very few people are going hungry. The main diet is plantains, which are steamed in banana leaves, rice, cassava, sweet potatoes, yams and beans - often served together in one sitting.

In addition to those staples, protein comes in the form of beef, goat, pork, chicken, a variety of fish, ground nuts and even grasshoppers.

I found people, in general, don't work very hard in Uganda - due to the abundant food sources and the fact that Ugandans distill a very potent alcohol from bananas, which they can buy very cheap.

My Ugandan hosts agreed, and most days they were lucky to get four hours out of their farm laborers.

Workers showed up around 9 a.m. (unless it was raining - then they wouldn't show up at all) and leave around noon or 1 p.m.

In the afternoons, they tended their own gardens or sat in the shade of a thatched hut and drank banana spirits - the closest comparison I have is grain alcohol.

So, I came to the conclusion that if your belly is full and you can make or buy cheap alcohol, people in general are pretty happy.

Two months is not a long time on a farm, and my accomplishments were minimal in the realm of sowing seeds. However, I spent long hours talking with James, Bernard and Susan and the minister about farming, and hope I planted a lot of seeds in the way of ideas.

Now I just need to go back and see if they have germinated.

This story has been posted in the following forums: : Headlines; COS - Thailand; COS - Uganda; Farming; Sustainable Agriculture