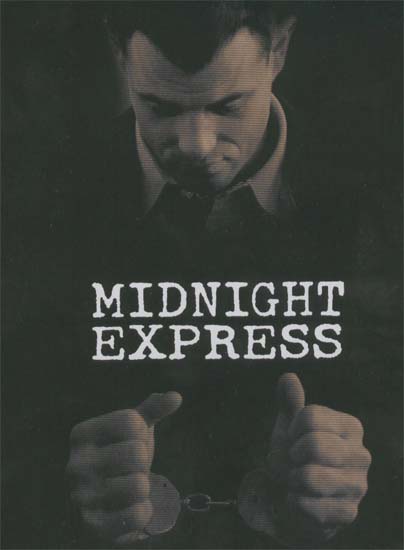 Read and comment on this email published with the permission of its author, Turkey RPCV David Bloch, who was a consular officer in Turkey at the time the events in the movie "Midnight Express" took place at:

As an ex PCV in Turkey and, a decade later, the consular officer in Istanbul who visited Billy Hayes every couple of weeks during his last two years in prison (how his transfer to a minimum security prison was arranged is an interesting tale -- but one that Billy can tell if he so wishes), I was interested in John Flinn's article.

I would add another angle to Flinn's views on Hayes's imprisonment: the policies of our government then -- and probably now. In the name of stamping out drug trafficking the DEA and other US agencies work closely with governments of drug growing/producing countries to come down hard on traffickers. Then US consular officers do their best to see that the arrested American traffickers are treated justly and humanely. In the case of Billy Hayes, American Ambassador Wm Macomber in Ankara expended enormous energy and effort to obtain his release, as I'm sure Hayes would attest. It was Macomber who first tried to get the Dept of State to negotiate a treaty with Turkey for a prisoner exchange program. He was unsuccessful, due to the State Department's concerns over federal court vs. state court legal enforcement authority. However, Macomber's efforts led to the many prisoner exchange treaties that the US now has with foreign countries.

I encountered a similar problem as consul in Afghanistan, 1977-79. The DEA officer would poke his head into my office to let me know when an American had been arrested for trafficking -- at which point I would go to the prison to visit him/her. Strange as it may seem now, the Afghan judicial authorities were much easier to deal with than the Turks because the Afghans weren't nearly as sensitive to foreign diplomatic efforts on behalf of their arrested citizens. Unlike the Turks, the Afghans had never been successfully bullied by Western/Christian powers (Remember, this was 1977-78), and they had a sense of self worth and confidence that the Turks lacked in the 1970s. In fact, some Afghan judges freely admitted to me that only tough Afghans could survive in their primitive prisons (Was this a point of pride?). Thus they were willing to substitute a reasonable fine in lieu of a jail sentence. As one judge confided, "why should we give heavy jail sentences to foreign kids for trying to smuggle a few pounds of hashish or opium, when governors of our northern provinces earn millions flying out tons of the stuff in their own planes, and from their own airfields." Decency and common sense can be found in what appear to be the most unlikely places.

We all got the wrong message from 'Midnight Express'Y

Read and comment on this story from the San Fransisco Chronicle on the movie "Midnight Express:"

We all got the wrong message from 'Midnight Express'

Mention that you're planning a trip to Turkey, and there's a good chance you'll get a reaction like the one I got from a friend the other day.

Ah, "Midnight Express." In the history of cinema, has any film done more to blacken a nation's reputation among travelers? Even today, a quarter of a century after its release, I still hear people cite it as a reason for steering clear of Turkey.

For those who missed it, the movie is based on the true story of Billy Hayes, a young American caught trying to smuggle 4 1/2 pounds of hashish out of Turkey in 1970. Thrown into a hellhole of a Turkish prison, he's tortured by sadistic guards, betrayed by corrupt lawyers and toyed with by capricious judges before he finally escapes. I rented it again the other night, and the 1978 movie, with its Oliver Stone screenplay, holds up as a masterful piece of filmmaking. It's a nail-biter, every bit as harrowing as I remembered.

There's no doubt the movie is a chilling and powerful cautionary tale, but here's the thing: Most viewers come away with the wrong message. That's not just my view -- it's the opinion of Hayes himself.

Hayes, now 56, lives in Los Angeles, where he works in the entertainment industry. He recently made his directorial debut with the indie film "Cock & Bull Story," but he'll always be known as the guy behind "Midnight Express."

He told me he feels awful that the film gave a brutal reputation to the entire nation of Turkey. The cruel and barbaric prison conditions depicted in the movie were accurate, he said, but they were hardly unique to that country. Malaysia, Thailand and any number of other places were -- and are -- just as bad. "This story," Hayes said, "could have happened in a variety of countries."

It also bothers him, he said, that "Midnight Express" depicts all Turks as monsters. "I loved the movie, but I wish they'd shown some good Turks. You don't see a single one in the movie, and there were a lot of them, even in the prison. It created this impression that all Turks are like the people in 'Midnight Express.' It was a brutal prison, but I wish (the film) hadn't shown all Turks as bad people, as caricatures. I wish they'd shown some of the milk of human kindness I witnessed."

Hayes said he wouldn't hesitate to return to Turkey -- if he could. "I'd love to go back. I really loved that country -- except for the five years I spent in prison. I loved the Turkish people."

For years, he stayed away because Interpol held a warrant for his arrest. Interestingly, Turkey turned his name over to the international police agency not after he escaped from prison, nor after he wrote a book about the episode, but after the film came out. The warrant expired five years ago, but Hayes has another reason for avoiding Turkey: he fears he'd be held responsible for all the trouble "Midnight Express" has caused its tourism industry.

"There's no doubt it changed the whole face of Turkish tourism," he said. "I'd really like to go back, but I'm afraid about the fallout from people who lost business. It's not fair. The burden fell on people who weren't to blame."

According to my Lonely Planet guide, the original Midnight Express was actually a humane way for Turkey to rid itself of foreign drug offenders while appearing to meet U.S. demands for harsh sentences. It was an old rail line from Istanbul to Edirne, in far-western Turkey, that cut across a corner of Greece. While they appealed their convictions, the drug offenders would be put aboard the late-night, slow-moving train and then jump off while it passed briefly through Greece and make their way home from there.

None of this is meant to let Turkey off the hook for its treatment of prisoners. According to a 2002 report by Amnesty International, torture while in police custody remains widespread, including falaka, the beating of the soles of the feet suffered by Hayes and countless others. But an Amnesty International official, who asked not to be identified, told me: "The situation there is not unusual. It's typical of many countries." (American prisons, it should be added, hardly get a gold star from AI.)

Amazingly, a large number of Americans have failed to heed the real message of the movie. Each year, on average, 1,000 Americans are arrested in foreign countries on drug charges. While many are quickly released, roughly 1, 600 are currently rotting away in foreign prisons, often in conditions similar to those endured by Hayes, according to Stuart Patt of the U.S. State Department's Bureau of Consular Affairs.

"Prison conditions in much of the world are pretty horrible," acknowledged Dick Atkins, a Philadelphia attorney who specializes in freeing Americans from these situations. "And the criminal justice systems in a lot of countries are just as bizarre as the one in the movie. It's important to remember that when you travel abroad, your rights as an American citizen don't come with you."

For those who still haven't gotten the message, I'll say it as clearly as I can: The recent bombings might give pause, but don't let "Midnight Express" alone deter you from visiting Turkey, one of the most enchanting -- and, in my experience, one of the friendliest -- nations on Earth. And if you travel there or anywhere else, don't -- do not -- buy, sell or smuggle drugs. You absolutely don't want to star in "Midnight Express: The Sequel."

This story has been posted in the following forums: : Headlines; COS - Turkey; Drugs; Prison; Diplomacy

Billy Hayes is a fool to forgive the Turks, they took away 5 years of his young life, I escaped from Turkey too in 1971 by crashing my Landrover across the River Meric bridge,they shot at me but missed, my crime supposedly insulting the Turkish Nation and I cant even speak Turkish. Midnight Express was true, I wouldnt go back there,and I will never forgive them. Colonel Tom

If you ever go to turkey...don't get naked and climb on a statue of attaturk. you will be beaten.