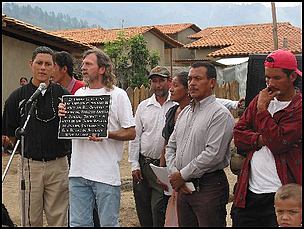 Wednesday, she will venture to that country once again as the latest volunteer in the Boulder-Jalapa Friendship Cities Project.

From left, Honorio Herrera, a translator, is pictured with Dennis Duckett of Boulder and members of the Champigny water board Fermin Hernandez, Marta Montiel, Juan Gonzalez and Danilo Arauz at the inauguration of the Champigny water system in Nicaragua's Jalapa Valley. The plaque reads: 'The water system was constructed with the efforts of the people of Champigny, the help of Friendship City Project of Boulder, Colorado, and the support of the Rotary Clubs of Boulder, Colorado, and the Rotary Club of Matagalpa. Built 2000-2002.'

For 20 years, Boulder volunteers have helped boost standards of living in the poverty-torn Jalapa Valley. Every year, Boulder sends delegations of about 15 volunteers to Jalapa for two weeks.

"The people are so amazing," said Army Armstrong, who went to Nicaragua last spring. "It's such severe poverty, you can't imagine how they can do anything. But they survive."

Jalapa is one of Boulder's six "sister cities." The others are Dushanbe, Tajikistan; Lhasa, Tibet; Mante, Mexico; Yamagata, Japan; and Yateras, Cuba. Sister-city activities for each city are coordinated by the non-profit organizations that initiated the relationships.

At the northeastern tip of Nicaragua, the Jalapa Valley is an agricultural region that houses 60,000 people, said Betsy Duckett, who returned from Jalapa with her husband, Dennis, in September after a year-and-a-half stay.

Though conditions are generally better for the 16,000 people who live in Jalapa proper, in the countryside, houses are generally adobe structures with dirt floors. Few have electricity, and almost none have indoor plumbing, Dennis Duckett said.

In recent years, the Friendship Cities Project's focus has been on developing potable water systems to bring safe drinking water to the village. The last project, funded by a grant from the Flatirons Rotary Club, brought clean water to 350 homes and close to 2,000 people, he said.

Water in the Jalapa Valley is often contaminated from chemicals used in farming, Dennis Duckett said. Safe drinking water is now piped from the mountains to a 20,000-gallon storage tank near the village, where it is chlorinated and flows out to taps in back yards.

Betsy Duckett said volunteers chose to help clean Jalapa's water supply because the program "has a philosophy that what they do has to help the community, not individual people."

Overpopulation is also a major concern in Jalapa, where the unavailability of birth control and the stigma attached to contraception by the residents' Catholic values contribute to the average mother giving birth to seven children, she said.

Along with overcrowded homes come overcrowded schools. As many as 70 children share one classroom, teacher and textbook. In addition, to enroll in public schools, students are required to have a uniform, backpack, shoes, pencil and notebook.

This year, plans are in the works for a 20th anniversary reception for the Boulder-Jalapa Friendship Cities Project, and an anniversary delegation will leave in July.

This story has been posted in the following forums: : Headlines; COS - Nicaragua; AIDS; HIV; AIDS Education; NGO's

I am trying to contact Heidi Reukauf from Summit County, CO. Hope things have been going well for you, e-mail me!

Hi Heidi! e-mail me at rmbless@hotmail.com