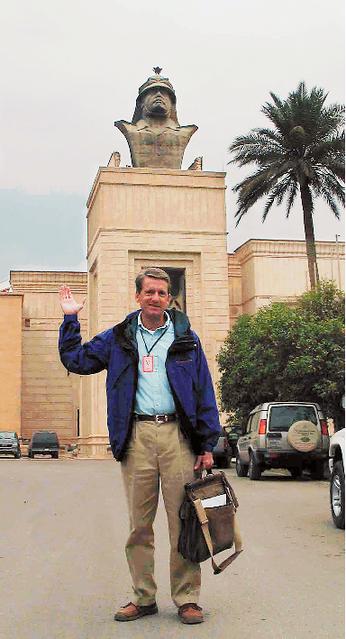 Ron St. John's claim to fame was that he was an aide to former Republican Pima County Supervisor Mike Boyd.

By a strange turn of events, he's been a "democracy builder" for going on seven years. Who knew there was such a thing?

And now he lives in a hotel in Baghdad. As in Iraq.

He's seen enough dictators' digs, including Saddam Hussein's palatial abode with its marble and gold bathroom fixtures, that he jokes they all share the same interior designer.

St. John, 44, went from Pima County to Bucharest, Romania, in 1997, in the employ of the International Republican Institute, a nonprofit, nonpartisan organization dedicated to advancing democracy worldwide.

Somewhere, there's probably a parallel to the Balkanized, muddy world of county politics back then and the mess in Eastern Europe. But he had other experience as well, establishing a community-college system in Belize and working for the Peace Corps in Uruguay prior to getting his Pima County job.

He found himself in a very cold, very poor part of the world in 1997. With some 500,000 stray dogs roaming Romania , there were dogs on the runway when his plane touched down. He met people whose family members were taken in the dead of night, never to return.

He was sent to Serbia in 2000 to help that country recover from Slobodan Milosevic, the "Butcher of the Balkans," who rode a nationalistic wave to power after the communist collapse in Eastern Europe.

St. John gave government officials advice on how to explain some looming changes to the people. With a wince, he remembers telling one official to go meet with the automaking union to explain privatization and what would happen to redundant workers. When the official got to the plant, the workers beat him up. He went back the next day, however, and persuaded 90 percent of the workers to accept the labor agreement.

Slovakia came next, then a long-deserved vacation.

He joked with friends that he'd probably be sent to Iraq next. Sure enough, the call came. He arrived in Iraq Nov. 20 last year.

He already has interviewed many of the emerging political party leaders and expects their number to grow.

There's a lot of work ahead. No one knows what the government will look like. There will be teachings on how to pick good candidates, run campaigns and hold elections. They'll have to do polling when there isn't even a census.

St. John, a former student body president at the University of Arizona, has been teaching young leaders to advocate for their causes. And he's correcting misunderstandings. Some students were operating under the assumption that democracy meant that if you didn't believe in a law you didn't have to follow it.

Challenges are ever-present. Phones remain out in much of the country. The unemployment rate remains high. Living in a hotel isn't the best. He misses gyms. He has to haggle for everything he buys. The hours are long: 12 hours a day, seven days a week.

Once a month, he dreams of carne seca at El Charro Cafe. There was, interestingly enough, a Mexican restaurant in Romania. But the refried beans were made of navy beans, not pinto. It just wasn't the same. On the other hand, he does like shish-kabob.

It's still dangerous in Iraq. When he travels to more-volatile areas of the country, he goes with a personal security detail, and they take two cars in case one breaks down. The blond and preppy man couldn't possibly look more classically American - and so he takes precautions.

He says the people have been universally friendly, even if they're anxious for Americans to hand over control . They're well-read, entrepreneurial and gracious. The few times he's been lost, he said, people have literally grabbed him by the hand and walked him to the door.

Satellite dishes, used-car lots and Internet cafes are popping up all over.

He expects to be there one more year. He believes that in five to 10 years, Iraq will have a functioning democracy.

"There's a school of thought that I think is really racist, that in the Arab world there can't be a functioning democracy," St. John said. "But I've met so many Iraqis committed to making a better society and having control over their own future. Everybody wants elections and stable rule. As one guy put it, they just want to be a normal, boring country like all the rest."

Aside from being on the inside of one of the great possibilities in the immediate future, there are a few other perks. He can have a sumptuous meal for $5. He's had the chance to see magnificent places such as Rome and Barcelona. And he didn't have to do much Christmas shopping.

Back in Tucson briefly for the holidays, he brought with him a bunch of Iraqi dinars bearing the picture of Saddam, much to the glee of friends.

This story has been posted in the following forums: : Headlines; Iraq; COS - Uruguay; Service

Hello to my fellow Uruguayan RPCVs!

May your soul rest in Peace dear...we all miss you...