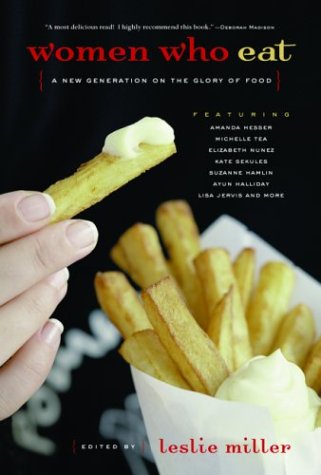 A question to consider when reading "Women Who Eat: A New Generation on the Glory of Food," is why it couldn't just be called "People Who Eat."

The worthy new Seal Press anthology ($15.95, 281 pages) includes an essay on pregnancy cravings and another on eating placenta. A few contributors write perceptively on their relationships with their mothers. But for the most part, the 29 essays aren't overniched by sex. None focuses on eating disorders, the most obvious area of female food concerns. And, in a nice plus, the best in the bunch aren't by the authors with the most recognizable names (e.g. New York Times food writer Amanda Hesser), giving readers new names to watch for in the future.


Seattleite editor (and contributor) Leslie Miller writes in the book's introduction that she wanted to read about women like herself, who were obsessed by food but not necessarily using it to make a living. She captures a consuming, dreamy culinary fascination by telling how even the "Silver Palate" cookbook read like a thriller to her as a small-town kid in "the other" Washington.

"Its East coast (sic) pretentiousness, its delicious fussiness -- the breezy cataloguing of kosher foods and the best cornichon, goat cheese rolled in ash and light yet elaborate meals for after the theater -- who were these strange and wonderful people?"

"Women Who Eat" is not a perfect collection -- a few contributions run on, and others seem rough -- but there are enough highlights to make it well worth a look by women (and men) who love food.

Browsers should be sure to check out Terez Rose's piece on her personal and culinary transformations during a Peace Corps stint in Central Africa and Lela Nargi's confession that she fired her therapist because she didn't love food. Seattle writer Kate Chynoweth contributes a deliciously funny piece on the unromantic business of updating a certain kissy-kissy travel and food guide.

Rose, who wrote about her cravings for her mom's Midwestern food as she began her Peace Corps service, contributed this recipe to "Women Who Eat":

Mix all ingredients, pour into 8-by-8-inch pan and refrigerate overnight or 12 hours.

Remove foil for the last 15 minutes. Casserole is done when center has set. Cool slightly and enjoy.

This story has been posted in the following forums: : Headlines; COS - Gabon; Writing - Gabon; Women's Issues