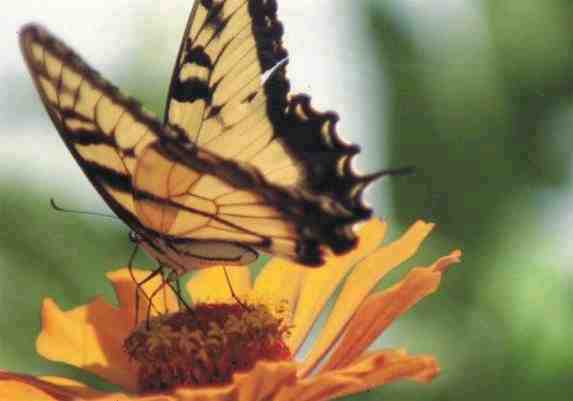 How to attract butterflies to your garden

This month's program for the Redlands Horticultural and Improvement Society, given by UCR entomologist Greg Ballmer, covered plants that will bring butterflies to home gardens.

By the Daily Facts

REDLANDS Greg R. Ballmer, an entomologist at the University of California, Riverside, gave a slide-illustrated talk on "Gardening for Butterflies" Jan. 15, when the Redlands Horticultural and Improvement Society met at the Church of the Nazarene.

Ballmer also gave copies of an 18-page paper on suggested plants for the Riverside-Corona Resource Conservation District. Included was a list of butterfly larval host plants, their growth form and bloom season, the area of habitat and the butterfly species which the plants attract.

One of UCR's first entomology graduates

Ballmer was in the first group of five students to receive a degree in entomology at UCR. He then served in the Peace Corps and now is in his 30th year with the UCR entomology department where he is a research entomologist and studies butterflies "for fun." He has a butterfly garden at his home and grows native California plants to attract them.

Ballmer said that there are 600 known species of butterflies in North America, one-quarter of which are found in California in a diversity of habitats.

He said that some two dozen urban species visit the Inland Empire, and skillful garden design can greatly increase the prospects of inducing them to visit or take up residence in one's garden.

An additional dozen or so species that rarely stray far from their natural habitats may be attracted to gardens at the urban edge, while the remaining species require specific environmental and climatic conditions not found in urban settings.

He noted that the majority of native California butterflies rely on native host plants (which are seldom grown in cultivation), have narrow climatic tolerances and are active as adults for only a few weeks each year. Many species are so specifically adapted to California's Mediterranean climate and specialized native hosts plants that they cannot survive outside of this region, he reports.

His presentation noted that butterflies which are active and breed throughout most of the year require larval host plants which are also reliably available in California throughout the year.

Some species often die if exposed to unseasonal moisture from summer irrigation. The determined butterfly gardener may invite such butterflies to take up residence by cultivating appropriate native host plants and minimizing or eliminating artificial irrigation.

He said that butterflies prefer full sun exposure, and only 10 Southern California butterflies use trees as larval hosts, preferring scrub vegetation and low-growing herbs. South-facing slopes better attract butterflies. Gardeners should thus situate the tallest (shade-producing) vegetation along the northern border and the lowest at the southern border of the property.

He recommends selecting plants having a variety of flower sizes and overlapping bloom periods and brightly colored, scented blossoms. Magnolia and rose produce little or no nectar.

Two plants known for attracting butterflies are butterfly bush and lantana, especially the orange blossom variety. They bloom for several months and produce copious nectar; their flowers are attractive to a broad size range of butterflies. However, neither plant is a larval host.

The gulf fritillary and the giant swallowtail are entirely dependent on exotic ornamental plants (passion vine and citrus, respectively) for their larval hosts in Southern California.

Several skipper species use grasses as larval hosts, and some are nocturnally active.

Ballmer showed many slides including one of the checkered skipper butterfly which makes a leaf shelter of folded leaves to avoid birds eating them.

Members "oohed" and "aahed" at Ballmer's photography, recognizing several species seen in their own back yards.

This story has been posted in the following forums: : Headlines; COS - Thailand; Butterflies; Entomology

I have some kind of swallowtail, but I don't know which. It's dead right now, but I still have it 'cause I'm trying to figure out what speicies. I'm wondering if I can't find out what it is because It was attacked so some segments of the wings are missing. Its body is black, but its wings are yellow and black. And I've seen pics of Tiger swallowtails, but this one has more lines of black and the lines that are on tiger swallowtails are much thicker on this one.

If you find anything matching my bad discription, please tell me.

Oh, and do you have any place on this site where I can put my photos? It won't let me