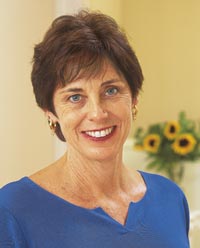 30 years after yoga relieved her scoliosis, a Palo Alto woman is helping others ease their pain

Emily Wilson, Special to The Chronicle

When one of her students at Iyengar Yoga Institute in San Francisco admired Elise Browning Miller's purple and white socks, Miller launched into a story about only having one of the socks that morning, and tearing the house apart looking for its mate.

"There I was -- poking behind the washing machine with a broom," she told her students. "And I thought, 'Oh, I'm not attached at all. This yoga stuff is really working out for me.' "

That's an understatement. Thirty years after starting yoga to get relief from back pain caused by scoliosis, Miller teaches at the California Yoga Center in Mountain View, which she helped to found, conducts workshops and classes all over the world, is on the faculty at Iyengar's teacher-training program, and is considered an expert on scoliosis and back care.

And now, after wanting to do it for more than 10 years, the Palo Alto resident has put out a video on yoga for scoliosis, also known as curvature of the spine.

"This is like a mission, a grail," she said. "After doing more and more workshops where people say 'I can't remember this,' I've known this is the medium to help people understand."

Miller is proud of the quality of the video, shot on high-definition film. "Yoga for Scoliosis" is 50 minutes long and has three sections -- the first showing back stretches, then a section of standing poses and twists, with the last section of more restorative poses. Miller said there is animation to show how the spine rotates with scoliosis, depending on the curve.

"You can't really understand it unless you see it dimensionally," she said.

Miller used four people with different curves in the video, including 16- year-old Katie Schwab, who calls Miller "spiritual, but not weird." 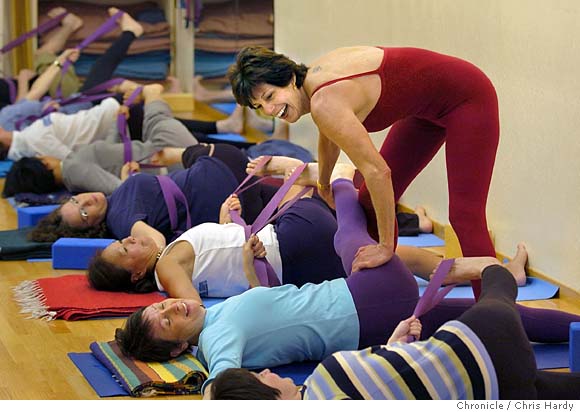 Elise Browning Miller shares her expertise with yoga, as well as her good humor, with students at the California Yoga Center in Mountain View. Chronicle photo by Chris Hardy

Jeanie Schwab, Katie's mom and a longtime student of Miller's, hopes the video will inspire others and draw more attention to scoliosis.

"When you have diagnosis of scoliosis, you feel like it's a life sentence, " said Schwab, a librarian who lives in Cupertino. "This is something you can do for yourself, and to have a role model like Elise is pretty influential, too."

While Jeanie Schwab says she doesn't have any miracle stories, she did stop feeling pain in her back for years after starting yoga. A lot of that she attributes to Miller's style of teaching.

"I just have a tremendous respect for what she has been able to do with her own body," she said. "She's her own walking easel. She has such strength and control, and she has made it her business to really understand kinesiology and anatomy. When you say 'Why is it pinching here?' she can tell you. She really knows the bones and muscles and ligaments."

Another participant in the video is Gaby Diskin, a Realtor and Pilates teacher who lives in Oakland. Diskin still recalls her first class with Miller 10 years ago.

"It was a tremendous experience because of her positive uplifting energy, " Diskin said. "She's a very fun person. My friends who don't have scoliosis love taking her class."

Diskin said she felt comfortable with Miller right away.

"It's kind of a personal thing -- someone touching your back if you've got an uneven back," she said.

Diskin's doctors recommended surgery when she was a teenager, as did Miller's. Miller opted not to get a rod in her back to correct the 49-degree curve in her spine; she instead chose to swim to keep her back strong. Years later, when she was in the Peace Corps in Brazil and not able to be active, her back started bothering her, and another volunteer offered to do yoga with her.

"He was a tall, blond, handsome surfer," Miller said. "I all of a sudden decided I was very interested in yoga."

Miller wanted to continue yoga when she came back to the United States, but she wanted to understand why sometimes the yoga would help her back and sometimes it wouldn't. On a visit to California, she met B.K.S. Iyengar, author of "Light on Yoga," a seminal work on the subject.

Iyengar's style of yoga, which focuses on precision and alignment, often with the use of props, opened a whole new world for Miller. She has traveled to India many times to study with Iyengar, and is certified as a senior Iyengar teacher, an honor that few hold. 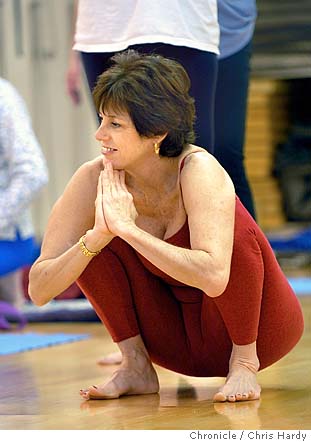 Miller doesn't want to be limited by her specialty, and enjoys teaching regular yoga classes as well as those specifically for back care. But she says she loves doing workshops for people with scoliosis.

"It becomes a community," she said. "People feel so alone out there. They feel like 'I don't have heart disease, I don't have cancer, but I do have pain. ' And it's so much fun to be in a room with people who aren't perfect. It's such a thing in our society that you have to be perfect."

The intent of the video, one of the only ones to deal with therapeutic poses, is to reach people who can't go to Miller's classes, as well as those who want to remember what to practice at home. That's important to Dr. Sigurd Berven, an orthopedic surgeon at UC San Francisco who consulted on the video. He sees a therapeutic value to yoga.

"Elise has done a great job of introducing to the public a tool for non- operative management," he said. "The more the public understands that this is an option, the better."

Dr. Lawrence Rinsky, an orthopedic surgeon at Stanford University Hospital, cautions that doing yoga won't correct scoliosis, but he does see benefits in his patients who try it.

"It can make people more flexible, more comfortable and often happier," he said. "I like people to be active. Years ago, when people had back pain, we suggested bed rest. Now we never say that. I fully believe that people should have a passion for an activity. With some people it's swimming, with me it's running -- and yoga is a perfectly good one."

Rinsky tells his patients with scoliosis that there is a great resource for them right in the neighborhood.

"People have come back universally enthusiastic," he said.

The enthusiasm of her students and Miller's love of teaching was what inspired Sari Armington of Alchemedia, who directed the video, to want to work with her. "Our motto is we tell stories on screen," Armington said. "This is more than just a yoga video; it's a story. She's an inspiration to many people who feel debilitated. She has been able to pull herself out of a lot of pain and discomfort with her yoga. We saw her passion, and passion is what attracts us as filmmakers."
Getting the video

I had scoliosis surgery over 20 years ago and Dr. Rinsky was the surgeon who performed the operation. He is a wonderful professional, and if he admires the idea of Yoga helping his patients, maybe I should try it too.

I have a 49 degree curvature (scoliosis) and an eleven year old injury to my entire spine, dr. said I tore every muscle and ligament in my spine- leaving me with a permanent injury to my neck- cervical torticullis. I am plagued by chronic migraine. Do you think that trying yoga could do anyhting for me?