Scott A. Smith served as a Peace Corps volunteer from 1996 to 1998 in Bukhara, Uzbekistan 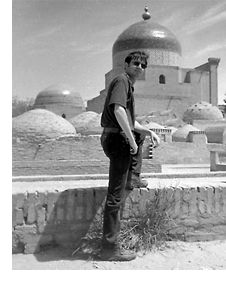 Scott A. Smith served as a Peace Corps volunteer from 1996 to 1998 in Bukhara, Uzbekistan

I served as a Peace Corps volunteer from 1996 to 1998 in Bukhara, Uzbekistan. Here are some of my memories of that time:

I was assigned to live and work as a university English instructor in Bukhara, one of Uzbekistan's treasured historical cities. At Bukhara State University, I taught many groups of English majors in conversational practice and was surprised at the students' high level of fluency despite the lack of textbooks, functional chalkboards, or even chalk itself at times.

A typical evening for me at home after teaching was spent washing my clothes by hand—if there was enough water pressure that day—and cooking my meals—if there was enough gas to light a flame on my stove. Tuning my portable short-wave radio to English language programming also kept my mind occupied when I ran out of reading material.

My host mother and father were a retired couple who loved tutoring me in Russian and Uzbek. With a pot of tea between us, we would talk about the day's events while they pointed out my incorrect Russian verb conjugations.

Having toured the Old City a couple of times, I began to see the beautiful monuments less and felt instead the dust in my nose and the hot wind irritating my skin. The adventurous spirit with which I had approached the local rice dish prepared with cottonseed oil was replaced by dancing visions of a pizza and a Coke.

I will always fondly recall my Peace Corps days in Bukhara. I value the personal relationships I made there with my students, colleagues, and neighbors. Having lived outside America for more than two years, I gained a new perspective on our culture and political system. I learned a lot of things from my experiences that probably will take the rest of my life to fully appreciate.

This story has been posted in the following forums: : Headlines; COS - Ukraine