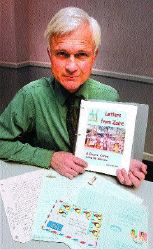 John Jochum has a story to tell in his collection of letters sent home from a stint in the Peace Corps in Africa in the 1970s.

It was 1975. Zaire had just started its long descent into economic decline when John Jochum arrived as a Peace Corps volunteer. He spent three years in the central African country helping local farmers build fish farms. He also saw first-hand how a politically predatory country takes a toll on its citizens.

Jochum, who lives in Salisbury with his wife and three children, regularly wrote letters home, describing his experiences and sending along photos. His mother saved everything, tucking them away safely in an attic. When she died recently, Jochum found the letters and realized he had quite a record of his experiences as a young man 29 years ago.

Jochum is a science and French teacher at Faith Baptist Academy in Salisbury. One of 11 children raised outside of Washington, D.C., he was the first to go away. He joined the Peace Corps for three years.

"There is a 26-year gap between the oldest and the youngest in my family," said Jochum who teaches science and French at Faith Baptist Academy in Salisbury. "I'd like my younger brothers and sisters to know what I did in my early 20's," he said.

He'd like to publish his works. Until then he's sharing them with friends and family. Last fall, he ran into Brian Polkinghorn, director of the Center for Conflict Resolution at Salisbury University, who wrote a Foreword for the manuscript.

"In this collection of letters, John takes us through his personal transformation," writes Polkinghorn. "We are privy to his inner thinking on current events...and his strong connection to his family thousands of miles away."

Jochum was right out of college when he joined the Peace Corps. It was a time of unbridled volunteerism when young Americans left the comfort of their homes for the uncertainly of living in rural villages with no amenities.

"The Peace Corps was strictly altruistic," said Jochum. "I just went there to help." He rode about on a motorcycle, teaching farmers how to build a fish pond that would support the nourishing Tilapia, an experience he likens to "raising chickens underwater."

He often had to teach his workers the most basic skills, such as how to use a wheelbarrow.

Jochum survived the frustration of training workers, many of who were older than him and reveled in passing on his knowledge to nationals (agronomes) who would teach others after he left.

He adopted a dog, rid it of fleas and fed him so he gained weight. He also broke his collar bone and had to be flown to Germany. In his letters he chronicled the growing political unrest.

In a March 8, 1978 he writes, "The president of Zaire has purged the army of some 250 officers from Kasai and Shaba regions. "Many of these men are believed to have been killed. How much longer Mobutu can carry on like this, I don't know. I'm learning it's a complicated world, dad, with no simple answers."

"Too many people go to countries trying to do good things and they wind up causing trouble," he said. "John's goal was to make people self-sufficient. He shows how someone can make social change and not upend the apple cart. He was the perfect Peace Corps volunteer."