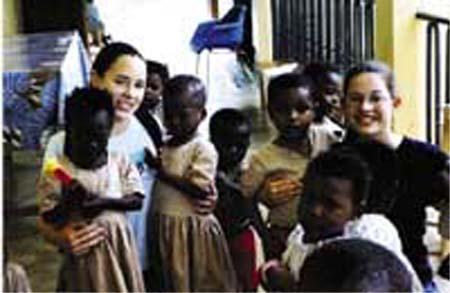 Caption: Rebekah Morgan, left, and Bethany Peters, right, are shown with children of the orphanage in Jeremie, Haiti, where they worked during their Christmas vacation.

ONAWA, Iowa -- How did you spend Christmas vacation?

If you're a member of the Morgan family of Onawa, you'd answer by saying you spent three weeks working with orphans and AIDS victims in Haiti. You did so without a phone, running water or TV. And you beat malaria and the worst of conditions to show that the human spirit can -- and will -- prevail.

The Morgans met years ago at Northern Arizona University; Sarah Morgan was from Indiana while Tom hailed from Michigan. Both had a desire to help people and acted on it one year after they wed in 1984 by joining the Peace Corps.

They returned to the United States after serving two years in Sierra Leone, West Africa, and went on to earn master's degrees from the University of Iowa Carver College of Medicine Physician Assistant Program.

A P.A. program directed the Morgans to the Monona County seat, asking them to work two years in an area termed "medically underserved."

"We've been in Onawa 10 years," said Sarah, who works at Family Medicine Clinic in Onawa.

Tom works with the Omaha Tribe of Nebraska in Macy, Neb. Both spend their days evaluating, diagnosing, educating and treating patients.

Work around the world

The Morgans don't limit their work to Siouxland, however. Tom has been to Tanzania, East Africa three times, and to Sierra Leone. He helped perform surgeries when traveling with the Siouxland Tanzania Education Medical Mission. Daughter Rebekah (Bekah), twice accompanied him to Africa.

Since then, voluntary missionary service trips have become an annual family tradition. But their last trip was different -- they took the whole family over the Holidays to Haiti. Tom and Bekah, 15, were joined by Sara, Matthew, 5, and family friend, Bethany Peters, 14, daughter of Onawa's Tim and Brenda Peters.

The family was provided with a place to stay, and was asked to pay air fare and food expenses only. What the Morgans hadn't counted on was that the health clinic, where they thought they would be working, was closed for two weeks over Christmas.

So, Tom spent his days there working in construction.

"This was the first time I was doing construction overseas and not working in a medical capacity," he said. "We did a lot of material gathering, provided trucks and supervised the construction. It is mind-boggling to see the slums and to see how they (Haitians) live. People crammed together in shacks with cardboard roofs. We'd go crazy, literally, if we had to live that way. It's a whole different mindset. You really appreciate what you have."

The Onawa contingent lived for three weeks without indoor plumbing or hot water. They did not have phone access most of the time; no TV reception; no schedules; and no home computers. So, they were able to spend a lot more time together as a family.

Upon reflection, Sarah said this experience centered around Bekah's and Bethany's opportunities. "They had a lot of work to do and were very productive," Sarah said.

Bethany said, "It was pretty shocking to see how needy they are there."

Bekah responded, "It was satisfying to feel like you were helping. It was great to feel useful."

The girls said the best experience involved working in an orphanage in the town of Jeremie. Children there were orphaned via AIDS, or were HIV positive themselves.

"It was good to be able to give them the attention that they needed so desperately," Bekah said.

"They crave love," Bethany added. "We got to help them decorate for Christmas."

When the Haitian Health Foundation clinic opened after Christmas, the Iowa teens helped with filing and entered charts into the computer. At the Center of Hope they weighed and measured pregnant mothers, did more office work and made food cards.

"The food cards allowed the mothers to pick out some food when they came for a checkup; a reward for coming to get a checkup," Bekah explained. "You feel like you're making a difference."

There was a trouble spot before that time, though. Three or four days before departing, Bekah woke up with body aches. By that evening she had a high fever.

She was treated, but remained ill two days. Bekah was weak and moved via wheelchair through airports on the trip home.

Her condition was similar to that of Sarah, who contracted dengue fever on her last missionary trip. Both are mosquito-borne illnesses and not contagious.

"I didn't like the mosquitoes," said Matthew Morgan, a kindergarten student who still shows off his bug bites.

"There is such a discrepancy between the rich and poor in third-world countries," Tom concluded. "The Dominican Republic is a lot better off because of its governmental structure and it shares the same island with Haiti. Yet, Haiti is so much more depressed. But when you get down to a personal level, person to person, it strips away a lot of pretexts (we have) about people. I often receive more than I give."

"We don't go alone," Sarah added. "The journey is a result of everyone supporting us. The community is very helpful in supporting us -- not just financially. We have received grants in previous years, and, the response at garage sales has been wonderful. Some people donated money and some donations were toward medicines."

"Where we go and where we have gone overseas, the Americans are considered to be very generous," Tom said.

"We have been revered, respected, and held in high esteem at the personal level," Sarah said. "America is a very positive force in the world."

For more information about the Haitian Health Foundation go to www.haitianhealthfoundation.org

This story has been posted in the following forums: : Headlines; Service; Missionaries; COS - Sierra Leone; COS - Haiti

i am very interested in becoming a missionary in sioux city and i want to know how i can do that. i would like to visit places like the juvenile detentions centers in iowa and would like to visit other places in the area to help spread the word. i would also like to do it in places like rehab centers because i also struggled with various addictions and when i met the lord i became more aware of life and now want to teach others. i do not go to any certain church and i am not sure if i have to but with the help of missionaries around sioux city i sure would like to try and find a great place to help out in the community.