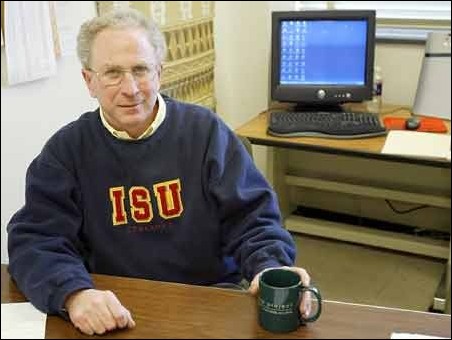 When William Edwards' name was called last week to receive the Excellence in International Agriculture Award, presented by the College of Agriculture, he was not there to accept it.

"It was ironic that it was an international award, and I was in Mexico on a site visit," Edwards said.

Edwards, professor of economics, was in Mexico preparing for his upcoming spring break travel course to the University of Chapingo, Mexico. He will be leading the group of agriculture business students to a portion of Mexico Iowa State has never sent students to.

Each department nominates a candidate and a proposal.

"We chose him because of his international arena and because he offers a nice mix of research and student involvement," Duffy said.

Nominees were evaluated on how well their global experiences were used in the promotion and integration of global perspectives in research, extension and teaching.

Edwards' desire to see the world and make a contribution has stimulated him to travel to 10 countries.

He took his first trip abroad in 1969, spending six months in Mexico on an International 4-H Youth Exchange right after earning his bachelor's degree from Iowa State.

After returning from Mexico, Edwards earned his master's degree from Iowa State in agricultural economics, then headed abroad again. Edwards spent two years in Colombia as a member of the Peace Corps. There, Edwards learned the basics of the Spanish language, and he is now fluent in it.

Six years ago, Edwards led 36 students to Costa Rica for his first ISU travel course. It became his favorite country because of the climate, small area and travel ease.

Taking the students and watching them see new things is his favorite part, Edwards said.

Three years ago, Edwards led another group to Costa Rica. Angela Boeckman, who traveled with the group under Edwards' leadership, was a freshman at the time.

"You could tell his experience through his planning," said Boeckman, currently a senior in agriculture business.

She said Edwards' fluency in Spanish helped the group because he could share information with the students.

Boeckman said Edwards encourages students to participate in events in Iowa as well as abroad.

"He tries to bring together people that wouldn't necessarily be together," Boeckman said.

Edwards said every student should travel abroad or meet international students on campus.

"Even if it's 10 days or two weeks, travel courses can give students a taste of other countries," Edwards said.

This story has been posted in the following forums: : Headlines; COS - Colombia; Awards; Agricutlrue; Uiversity Education