Ghana RPCV Fred Shoemaker has given more than 41,000 golf lessons 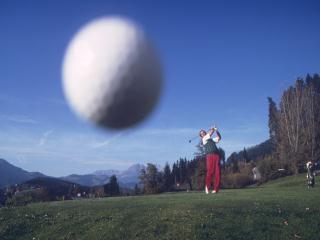 Ghana RPCV Fred Shoemaker has given more than 41,000 golf lessons

He's given more than 41,000 golf lessons since 1976, but, metaphorically speaking, Carmel Valley's Fred Shoemaker might be a baggage handler as much as a golf pro.

The baggage clutters your brain every time you stroll to the No. 1 tee box. There are formulas, checklists, swing keys. There are insecurities and worries, many of which are related to fear of embarrassment.

Golf, as we've all learned from experience, is the most cerebral sport in the world.

"Or, it's the least..." Shoemaker argues with a smile, summarizing in just four words the theory behind Extraordinary Golf, which is the name of both the school he founded in 1990 and the book he copyrighted in 1996.

"When we ask people what percentage of the game is mental, most will tell you that it's pretty high. But suppose it isn't?" he suggests. "The truth is, it's not mental at all -- you have a physical ball, a physical club, a physical body. And when people can finally let go of these crazy things they have in their heads, it's amazing what can happen. Just because you make it mental doesn't mean it is."

The premise of Extraordinary Golf is to clear the mind. Purge all the lessons, the swing thoughts, the fears, concerns, prejudices. Stop interfering. Let the golf happen.

It's a philosophy he developed "out of desperation."

The 51-year-old Shoemaker was a golf prodigy as a child growing up in Guam, where his father was a Naval officer. He became a star on his high school and college golf teams in the United States. He had backing to join the pro tour.

But, by then, he had soured on the sport. Golfers he knew complained endlessly about some aspect of their game -- and he was one of them.

"The whole experience had become very narrow to me, consisting only of practicing, playing and talking about golf," he wrote in his book. "I found myself wondering why anybody would want to do this for a living."

So, he joined the Peace Corps, teaching school for three years in Central Ghana, Africa, where he eventually became homesick for the game. After losing a round of golf to Ghana's champion -- who played in tee shirt, shorts and bare feet -- Shoemaker had the beginning of an epiphany.

"My game that day (was filled) with anxiety and self-doubt, which made me play worse than I was able to play," he wrote. "By contrast, he played with a joy and a sense of freedom, (and, as a result) his game allowed him to play closer to his potential."

Not long afterward, Shoemaker found himself surrounded by curious Ghanian children as he hit golf balls in an open field.

The fact that he didn't have a logical answer became another piece of his awakening.

"Suddenly, I knew there was a great reason for playing the game," he wrote. "It wasn't any particular word that came to my head. It was a feeling, a glimpse of the wonderful possibilities that this game had. I wasn't aimless anymore."

His rejuvenated love for golf eventually evolved into a realization that people invariably overthink the game. Too much brain power is involved. The key to extraordinary golf, he says, is the ability to be present. Past golf swings are irrelevant. Future golf swings haven't happened yet, and therefore are equally meaningless.

"The fellow who makes a million dollars on the pro tour, when he steps up to the first tee, has the same crazy things going through his head that are going through yours," says Shoemaker, who has lived on the Monterey Peninsula since returning from the Peace Corps in 1984. "But he has learned through his training to let it go, let it pass by, and be present at the task at hand."

Tips and instructions ultimately get in the way when it's time to swing the golf club, he says. Playing extraordinary golf, at its essence, is no different than riding a bike, or walking down the street. Verbal instruction, at some point, sabotages the body's ability to move freely and naturally.

"How does a child learn to walk? Certainly not by verbal instructions from the parents," he says. "The child learns by trial and error, by awareness of action and result."

For Shoemaker, teaching people how to play extraordinary golf begins with clearing the mind of all of those thoughts that get in the way -- a task that, to most of us, probably seems a whole lot harder than correcting a person's grip, posture or backswing.

"Or easier," Shoemaker argues again. "Because it actually works. Golf handicaps haven't changed in 50 years. There have been thousands of articles and books about fixing your swing, but you continue to look for the next tip that will cure your game. At some point, you come to the realization that that isn't it."

Extraordinary golf, he says, is inside all of us. His challenge as an instructor is simply to clear the way and let it come out.

"Michelangelo supposedly looked at a block of marble and saw David inside," he says. "That's my experience as an instructor. The golfer exists, fully there, but he has stuff covering him up. The game, for me, is to let him out."
Dennis Taylor can be reached at 646-4344.

This story has been posted in the following forums: : Headlines; COS - Ghana; Sports; Golf