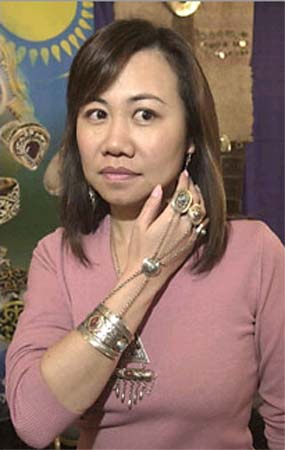 Jeremy Terr was a Peace Corps volunteer in Kazakhstan in 2002-03 helping the Almaty Chamber of Artisans with tax forms and the like, but his time was up before he could help the group broach the international market.

Independently and concurrently, the Tucson-Almaty committee has sought to bring an economic development project from Almaty to Tucson.

"It was a coincidence that Jeremy contacted us," said Jerry Gary, the committee's chairman. "This is the first one of those projects."


"We're trying to build for the future."
- Jerry Gary (above), chairman of the Tucson-Almaty Sister Cities committee
Terr, now a master's degree candidate at Thunderbird, the American Graduate School of International Management in Glendale, quickly came upon the Tucson-Almaty relationship and tracked down Gary last year. Terr had gotten to know Aldauev, the artisan chamber's business manager, and had kept in contact.

"Jerry Gary has a passion," Terr said. "I presented the opportunity to him to do a project with the artisans."

Aldauev and Bashirov - neither had been to America - were game. And Gary made one of his frequent trips to Kazakhstan in October to clinch the international deal.

Terr and Gary had contacts with the U.S. Embassy in Almaty, which paid the airfare for Aldauev and Bashirov, based on a proposal written by students in the Export Import Club and year-old International Development Club at Thunderbird. The Almaty mayor's office supplied the banner that decorates the Kazakh booth at the Pueblo Inn.

Gary put word out in Tucson to find a place for the Kazakhs to stay and Judy Dare, a member of the Tucson-Pecs Sister City Committee volunteered her home near the Pueblo Inn.

The biggest challenge in the process was finding an available gem show booth with fairly late notice.


This is an artistic composition, to be worn or displayed, made by Kazakhstan artisan Serzhan Bashirov, seen here at the Arizona Pueblo Inn Gem & Mineral Show. This item, titled "Kerulen," costs $500 and is made with silver, leather, turquoise and coral.
"Shows are locked up a year in advance," Gary said. "We were not sure we could even get a spot."

A spot was found at the Arizona Pueblo Inn Gem & Mineral Show, which is not even one of the 37 shows officially listed in the Tucson Gem, Mineral & Fossil Showcase.

"We're trying to build for the future," Gary said. "We're talking to the Pueblo Inn people to put on a central Asian show and Kazakhstan would be the centerpiece."

Traditional Kazakh jewelry is silver-based with broad usage also of turquoise and serdolik, a semiprecious mineral mined in the Ural Mountains.

Upon their arrival here, Bashirov and Aldauev quickly noted a kinship with jewelry produced in Arizona.

"We've looked at Native American jewelry. They have a lot of turquoise that is very similar to jewelry we have in Kazakhstan," Bashirov said.

They brought along rings, bracelets, necklaces and lots of earrings crafted by six or seven elite jewelers in Almaty, the largest city in Kazakhstan and also the partner in Tucson's most active sister-city relationship.

Once the gem show wraps in Tucson, Bashirov and Aldauev will be taken to Thunderbird in Glendale, where Terr, faculty and fellow students have organized a three-day workshop for the Kazakhs. It will touch on cost accounting and basic business strategy for the export market.

Handmade jewelry is rarely exported from Kazakhstan because not enough is made for export. Kazakh jewelry found on the international market usually is factory-made, Aldauev said.

"Each person who makes jewels has his unique style," Aldauev said. "Our jewelry has very deep roots. It reflects traditional and modern styles."

This story has been posted in the following forums: : Headlines; COS - Kazakhstan; Gems; Artisans