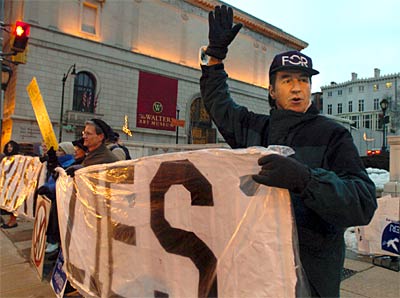 'A rebel' always looking for a cause

Activist: Protesting is all in a day's work for Max Obuszewski, even if it lands him in jail.

Caption: Max Obuszewski waves at supporters of the downtown "Bush Lies" protest that he participates in each month.
(Sun photo by Elizabeth Malby)
Feb 9, 2004

It's 5 o'clock on a February evening, and the wind is cutting through the intersection of Charles and Centre streets. Max Obuszewski holds one end of a 10-foot-long, homemade banner that reads: BUSH LIES.

To the longtime peace protester, it's all in a night's work, as routine to him as the nightly trip home is to his slowly passing audience of commuters.

This is a man who climbed on top a National Guard armory and sat singing until police arrived. He also tried to persuade heavily armed guards at the headquarters of the National Security Agency to let him deliver a letter to its director. Another time, he fasted for 24 days in jail to bolster his contention that he's a political prisoner.

Today, Obuszewski and seven other war protesters are to appear in a Baltimore County courtroom to answer trespassing charges for insisting on passing out anti-war pamphlets last year near the food court at Towson Town Center. To him, this case, especially, is a matter of principle.

"We think of the mall as the town square of today," he says. "We think we have a right be there."

In nearly three decades of activism on such issues as homelessness, animal cruelty and defense spending, Obuszewski has been arrested more than 50 times. His protests and his views sometimes draw taunts. While he was being held at the Towson precinct after his arrest at the mall, a police officer yelled "USA! USA!" on the intercom and imitated the sounds of exploding bombs.

Over the years, Obuszewski has established his credentials among Baltimore's activists. Louis B. Curran, an assistant public defender in the city, calls him "the conscience of the community."

"If Max is talking," Curran says, "something needs doing."

Obuszewski, a part-time bookkeeper and spokesman for the American Friends Service Committee, says the Quakers have a phrase for what he does: "Speaking truth to power."

"We don't expect to be especially successful," he says. "For me, I just couldn't not speak out."

For Obuszewski, this is a typical week: Monday afternoons are spent across the street from Supermax prison to protest the state's death penalty. On Tuesdays, there's a weekly peace vigil at the Friends Service Committee. Friday afternoons, Obuszewski is at the Friends meeting house on Charles Street for weekly rallies for Middle East peace.

He participates in the monthly "Bush Lies" demonstration in Mount Vernon. In May, Obuszewski will present "peace diplomas" to Johns Hopkins University graduates to protest the military contracts of the school's Applied Physics Lab. Every Fourth of July he spends at the NSA, often getting arrested.

Last year, he threw waffles outside Sen. Barbara A. Mikulski's Fells Point office to protest what he saw as her "waffling" on the war issue.

He recently picketed with striking grocery store workers over health benefits, not that he has any. Obuszewski, a longtime Rodgers Forge resident now living in Lauraville, says he makes less than $10,000 a year. Friends often help with clothes or car repairs, he says.

An Erie, Pa., native, Obuszewski was raised in a Polish, Catholic family with three brothers. He liked history and challenging his teachers. "I was a rebel looking for a cause," he says.

After graduating with a degree in electrical engineering and a master's in business administration from Gannon College in Pennsylvania, Obuszewski joined the Peace Corps in 1977 and helped women set up businesses in Botswana. He took a staff position with Nuclear Free America in Baltimore in 1983. He then became a friend of anti-war activist Philip Berrigan.

Retired Baltimore Circuit Judge Edward J. Angeletti recalled that he once ordered Obuszewski handcuffed for refusing to give his age during a hearing. But Angeletti says he also remembers Obuszewski's dedication to the peace movement, adding, "He has firm beliefs. For that you can't help but admire him."

In 1991, after Obuszewski and six others poured a mixture of oil, sand and blood (their own) onto a National Guard sign at the Fifth Regiment Armory, he served 11 days in jail.

He still has a ledger of bets his colleagues placed on the sentence he'd receive. Guesses on "Max's pool - $1 per block," ranged from community service to 36 days in jail.

On March 1, Obuszewski and seven other antiwar protesters refused to leave Towson Town Center, where they were distributing pamphlets to shoppers. (The Towson precinct officer who made the bomb noises while they were in lock-up has since been disciplined, police officials said.)

As usual, Obuszewski plans to represent himself today as the "Towson Town 8," as they call themselves, go to court.

C. William "Chuck" Michaels, an activist and Baltimore lawyer representing five of the protesters, said he expects prosecutors to place the cases on the inactive docket. Prosecutors declined to comment.

Michaels also said he has received a letter from the Rouse Co., which owns the Towson Town Center, showing that the company agreed to drop the lifetime ban from the mall that it had issued against the protesters. Attempts to obtain comment from Rouse were unsuccessful.

Obuszewski and others plan to again test whether protesters can legally demonstrate in such places as malls. "In Maryland, this issue isn't settled," Obuszewski says. "I'm a firm believer in the First Amendment. They tell me this is a free country."

This story has been posted in the following forums: : Headlines; Speaking Out; COS - Botswana