Why Not Malaysia RPCV Kinky Friedman for Governer of Texas? 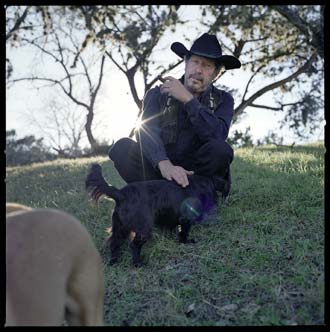 Why Not Malaysia RPCV Kinky Friedman for Governer of Texas?


Caption: Kinky Friedman founded the Utopia Rescue Ranch for abused and neglected pets. He is considering running for governor in 2006, although it's doubtful that his political appointees will be dogs. (Photo by Mark Greenberg)

Kinky Friedman wants to get his buns in the statehouse

Last month at Casbeers, Kinky Friedman was reading from his book, Kinky Friedman's Guide to Texas Etiquette, when he struck a sour note after referring to ballet as "basketball for homosexuals."

A blonde woman rose from her table, marched toward the stage, then veered toward the women's bathroom, throwing back the beaded curtains that guard the entrance. From the tiny hallway, her indecipherable rant could be heard. Finally, when she left the restroom, again, abusing the beaded curtains, she approached the Kinkster, and muttered: "I didn't appreciate your comment about ballet. I studied ballet for 12 years in Europe." Friedman leaned back, widening the space between himself and the angry ballerina. He may have even apologized, but what he said was inaudible. In any event, the woman left the stage, feeling satisfied that she had made her point.

With that kind of public persona, why is Kinky running for governor?

With the governor's race still two years away, Kinky Friedman - musician, author, animal lover, and irreverent personality who has made himself a Texas icon by being outrageous - has already printed campaign bumper stickers, one reading, "He Ain't Kinky, He's My Governor." Another sticker, shaped like a Texas flag with the Star of David replacing the flag's original white star, simply asks, "Why not Kinky?" Coming from a guy who, at 11 years old, penned the song "Old Ben Lucas" ("had a lot of mucus comin' right outta his nose"), his candidacy might seem like a joke.

It may not be fair to question a potential candidate's seriousness based on a song he wrote as a child. Yet, further evidence hints that chatter about the 2006 Texas governor's race may be another stunt in this Texas prankster's arsenal. The Kinkster, as he calls himself, has no political experience. Instead of stump speeches, he delivers one-liners about his political ambitions. Last month, when his "Governor's Balls Tour" stopped at Casbeers, Friedman told a crowd of mostly middle-aged fans, "I've got a head of hair better than Rick Perry, it's just not in a place I can show you."

However ambiguous his public monologue is, a recent conversation at his modest home in Bandera revealed that Kinky had been mulling over the idea of a political career for some time.

"There's nobody out there energized, just a bunch of sheep pulling a lever on a voting machine."
"The answer to that question is [political commentator] Molly Ivins' answer, 'Why the hell not?' I ran into her at the Texas Book Festival in November and told her I was running. She said, 'Why are you running?' And I said, 'Why the hell not?' She said, 'That's beautiful, that's your campaign slogan.'"

A near-death experience several years ago also prompted him to rethink his life. "I was caught on this cliffside in Cabo San Lucas one night. I spent the whole night there and I didn't know if I'd survive or not," he says in a serious tone. "I was thinking about what I'd do if I lived. So, this race is not really against Rick Perry. It's against the system and the stagnant status quo and all the politicians who've been there so long they forgot why they're there. It was during that time I decided - I didn't decide specifically to run for governor - but I decided that there might be something more to my life than what I was doing. And later I realized that we have a very colorful state, we should have a very colorful governor.

At Casbeers, the crowd, including a retired New Jersey couple who sat a front-row table, was in sync with the Kinky vibe. They sang along with "Sold American," and "Get Your Biscuits in the Oven and Your Buns in the Bed." In turn, Kinky reciprocated the crowd's goodwill: "The demographics are good tonight," he said to his sidekick, Little Jewford, "because you and I are two of the youngest people here. I'm 59, but I read at the 61-year-old level."

He also introduced a recent addition to the Kinky script, a story about a conversation he and Willie Nelson had about the United States' invasion of Iraq. "I was originally for war in Iraq, and argued with Willie about it. 'He's a tyrannical bully, and we've got to take him out,' I told Willie. And Willie said, 'No, he's our President, and we've got to stick by him.'"

Before he penned mystery novels or his semi-philosophical Texas Monthly column, before he founded his Utopia Rescue Ranch for abused and neglected pets, he was Texas' version of Weird Al Yankovic, energizing the state's music scene with songs like "Asshole From El Paso" (a play on "Okie from Muskogee), "The Ballad of Charles Whitman," (his take on the 1966 University of Texas tower shootings), and "Ride 'em Jewboy" (country music's only Holocaust song). Prior to those accomplishments, he served as a Peace Corps volunteer in 1967 on the island of Borneo.

During the early 1980s, when he began focusing more on his writing and less on his music, Kinky did so because he wanted "to have a lifestyle that [didn't] require my presence." But as governor, he would have to be omnipresent: "Yeah, that's gonna change. That period's over. I think music's loss will be politics' gain."

In 1986, he ran for elected office for the first time, when he campaigned for Justice of the Peace in Kerrville. He lost. "I don't know why I lost that election, but my fellow Kerrverts returned me to the private sector. I'm not bitter about that."

Although he had long thought about challenging career politicians, the 2003 political climate confirmed what Friedman had recognized for a long time: Voters are ready for change. Inspired by Howard Dean's rise from unknown doctor/governor to initial frontrunner and Arnold Schwarzenegger's dethroning of California Governor Gray Davis, Friedman feels the political arena is ready for a candidate like him.

The next gubernatorial election is in 2006, and by March of that year Friedman will need to have collected 45,000 signatures to run as an independent candidate. With the support of friends ranging from George W. Bush to Molly Ivins to Willie Nelson, he is confident he can pull it off. "Now I'm not saying that a big Pat Green concert or a Willie Nelson concert is gonna translate to votes any more than Dennis Kucinich is gonna benefit from Willie. But, I do think there's more of that happening now. I think there's a Howard Dean effect that's already taken place. It energizes the base, which is something you certainly can't say about the current situation. There's nobody out there energized, just a bunch of sheep pulling a lever on a voting machine."

Kinky concedes that the governor's power is limited in Texas, but that doesn't prevent the political ideas from flowing. He would like to try to legalize marijuana and gambling in the state, and would also introduce nondenominational prayer in the schools. "What's wrong with children believing in something?," Kinky explains. "Rick Perry's probably for prayer in school too, but he's not gonna get it because he doesn't wanna talk about it. The governor is the judge of a big chili cook-off; that's exactly what he is. His only value is that he can inspire people the way JFK inspired me as a young person, so that even after he was dead I joined the Peace Corps."

Friedman has ideas that could materialize into programs, without the consent of the Texas legislature, and he has the celebrity friends who could make his ideas possible. "I have a program, which Pat Green's mother, Nancy, has come up with, called the Texas Peace Corps, and that is not an oxymoron." Friedman's Texas Peace Corps would mobilize the Texas music community, Kinky says, making role models of popular musicians like Pat Green and Jerry Jeff Walker.

Aside from building his Texas Peace Corps, Kinky says he would use his connections with friends Johnny Depp, Robert Duvall, and Billy Bob Thornton to further define Texas' role in the filmmaking industry to aid the state's economy. But outside of the arts, Kinky is reluctant to talk about the issues. "There are some subjects - like abortion, like gun control, like the death penalty - which I could give you a really articulate discussion on. I could take either side and all I'd do is lose 50 percent of the people. And furthermore, the governor has very little impact on any of these issues. What I think of Iraq is irrelevant. What Rick Perry thinks of Iraq is meaningless; he can do nothing."

Given the governor's lack of power, Friedman would focus on softer programs like the Texas Peace Corps. "There will be more ideas like that," he says, "The lieutenant governor does the heavy lifting, everybody knows that. The governor should do the spiritual lifting."

While he is withholding his opinions on Iraq, Kinky dismisses critics, such as Kevin Phillips, author of American Dynasty: Aristocracy, Fortune, and Deceit in the House of Bush, who has said that "Texas machismo" is menacing to the world at large.

"That's complete bullshit, and that's what the Europeans are saying," Kinky remarks, "That's why I'm not doing shows in Europe anymore. To hell with them. The cowboy spirit is very important in the world and it's beloved by children all over the world and always has been."

If Friedman were to win the 2006 election, he would not be Texas' first musical governor. Wilbert Lee "Pappy" O'Daniel, owner of Hillbilly Flour and frontman for the Light Crust Doughboys, was elected governor in 1938 and served for two terms. During his tenure, O'Daniel promised to block any sales tax, abolish capital punishment, liquidate the poll tax (which he had not paid), and raise pensions. He broke all of those promises. He also loaded the University of Texas Board of Regents with people who wanted to limit academic freedom and discourage subversion on campus.

Of the similarities between O'Daniel and himself, Kinky says, "His band was called the Light Crust Doughboys, and mine was called the Texas Jewboys. His campaign slogan was 'Pass the biscuits, Pappy.' One of my most requested songs is 'Get Your Biscuits in the Oven and Your Buns in the Bed.' The parallels are just uncanny. It's scary."

Although O'Daniel was a popular governor, he enjoyed little success working with other politicians. In the end, pundits referred to his administration as Vaudevillian; he was a good showman, but a flawed governor. "I would be the reverse," Kinky says, grinning.

In addition to being compared to other political dilettantes, Friedman will have to prove that he can compete with Perry and other candidates. What he lacks in political experience, he compensates for in his colorful and varied life. "The human experience I've had is much broader than the other candidates, if Kay Bailey [Hutchison] runs. Her experience is very narrow, very political, and it's loaded with Washington crap. Rick Perry has Gray Davis potential, enormous Gray Davis potential."

And, if you don't believe that, or if you happen to be an angry ballerina, the Kinkster's not out to change your mind: "I'm not gonna to go to a bunch of rotary meetings eating rubber chicken and kissing babies; I'm gonna kiss their mothers. The people who don't understand and who think the cigar smoke smells bad are the kind of people who are not gonna vote for me anyway and they can vote for anybody they want to. The people who will vote for me are a whole different breed." •

This story has been posted in the following forums: : Headlines; COS - Malaysia; Politics; Humor