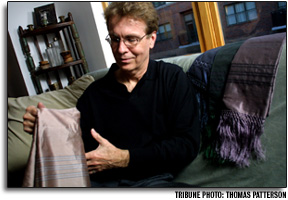 When he set out from Portland, Daniel Koch knew it was not the safest time to travel in Afghanistan.

No one heads to one of the world's most heavily land-mined countries without a compelling reason, especially in the current climate of increasing violence against even traditionally exempt aid workers.

But a compelling reason presented itself shortly after the 57-year-old Koch (pronounced "Cook") launched his new business, International Tradeworks, to help native craftspeople link up with market and distribution opportunities. He had just sold his half of his international furniture company in January 2003.

After talking with his friend Jim White, then the South Asia director of Portland-based Mercy Corps and now its director of project initiatives, Koch made him a proposal. He offered to go to Afghanistan and study trades, skills, products and materials, and identify development opportunities.

Mercy Corps took him up on his proposal and sent him to Afghanistan for three and a half weeks in late July and August, after which he came back with a list of artisans whose products could be marketed worldwide.

Besides offering emergency relief, Mercy Corps has access to microcredit, or the practice of lending small amounts of money -- as little as $100 or $200 -- to individuals for use as seed money that allows them to earn back many times the original amount as well repay the loan.

Mercy Corps has been administering microcredit programs globally for at least six years, and began offering such programs in Afghanistan last April.

Lynn Renken, Mercy Corps' South Asia senior program officer, says, "We were lucky to find someone with Dan's expertise who's been there before and also speaks the language. He's done some great work for us, and we're looking forward to implementing some of his recommendations."

Koch's assignment with Mercy Corps -- one of many nongovernmental agencies assisting in Afghanistan -- was the beginning of something much bigger.

In the next couple of months, he and his collaborators will travel to Washington, D.C., where they'll present their development model to a group of potential donors and on-the-ground agencies that are working in various countries to see if they can obtain seed money for their ventures.

On yet another project, in collaboration with a Canadian company, Koch will be doing some economic development work with the Mapuche community in Chile, a native tribe currently on a lower rung of the economic ladder there.

Koch is clearly enthusiastic about his new partnering ventures.

"They're doing some complementary things to what I'm doing, which is what's great about it," he said. "We all bring something different toward the same sorts of goals."

Koch began to build his credentials for such an undertaking as far back as the early 1970s, when he first lived in Afghanistan as a Peace Corps volunteer.

He's been back to visit since then, traveling in Pakistan, India, Indonesia and the Philippines over a period of 20 years while developing relationships with manufacturers for his furniture import business.

One can easily imagine this tall, lean, unassuming man with his mat of reddish hair quietly observing and and earning the trust and perhaps friendship of his interlocutors.

On his latest journey to Afghanistan, Koch found more candidates for microcredit than one agency could handle.

He met a potter in Kunduz who sold his wares to local markets for little money. And now a main road leading out of his town is impassable due to bomb damage, obliterating hope of reaching a larger market such as Kabul since the potter can't afford the more expensive route over the mountains.

"A micro loan would enable him to send a shipment out," Koch explains. "And if he had good new designs -- which we worked on together a bit -- he could theoretically sell his goods to a larger marketplace."

Koch also spoke to a leather tanner in Kunduz whose production slows to a trickle in the winter because he has trouble drying the leather. He said all he needed was a drying space with a roof on it, not necessarily even a building, to continue his production during the winter months.

That too could be obtained with a micro loan, Koch said.

In addition to the artisan marketing and distribution ideas, Koch advocates for the restoration of Afghanistan's formerly thriving businesses to their pre-Soviet invasion status.

The country was known all over Asia for its dried fruits and nuts and its many varieties of melons. Though more than two decades of war have destroyed countless orchards, irrigation systems and roads, Koch reports enormous potential not only for restoring the industries to their former levels of production, but also for expanding them, through the development of such exports as juices, concentrates, candies and fruit leathers.

Throughout his Afghanistan tour, Koch says, a particular theme kept surfacing. "Everyone worried that the U.S. will do what they did before," he says, referring to the United States' premature withdrawal after it had helped the mujahedeen beat back the Soviet invaders in the late 1980s. "Tell the Americans, 'Don't leave us. We don't want to go back to the gun.'

"I think the concept of doing this kind of economic development work is really resonating now, in the development world, in the business world, the realization that this is the kind of thing that is required if we want any kind of stability established in countries where there are problems going on."

This story has been posted in the following forums: : Headlines; COS - Afghanistan; Business; Entreprenuership; Imports