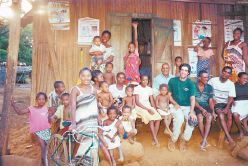 By MEGAN WILLIAMS
The Salinas Californian

Salinas resident Peter O'Farrell, in green shirt, sits with villagers in Androfiabe in Madagascar recently. O'Farrell is a volunteer with the Peace Corps.

Peter O'Farrell, 26, of San Benancio Canyon has been in a far-off land for a long, long time. According to his father, Robert O'Farrell, he's loving every minute.

O'Farrell is a volunteer in the Peace Corps, an environmental specialist stationed in Madagascar, the large island east of southern Africa that lays claim to cat-like lemurs and unrivaled rainforests.

Peter O'Farrell's three-year term is set to end Sunday, but even then he won't be rushing home.

"He is altruistic," said his father, a Monterey County Superior Court judge. "Before he settled into a life career he wanted to do something to help people, and he heard the call of adventure."

O'Farrell, who graduated from Palma High School in 1997, teaches farmers improved techniques for increasing yields, and he stresses sustainable practices instead of slash-and-burn agriculture.

He plans to stay beyond February to help draft a farm management plan for an environmental agency, and he'll stay an extra eight months after that to help establish a new rain forest reserve.

The former football and basketball player in high school was active in 4-H as well, an experience he put to good use in the Peace Corps, starting a similar group there.

Now fluent in Malagasy, the native language of Madagascar, O'Farrell has seen his share of ups and downs.

Halfway through his term, Madagascar rumbled with political unrest and the U.S. government evacuated all Peace Corps volunteers.

No sooner had he arrived back in Salinas, however, than he got a call saying it'd be OK to return. He rushed back.

"I'm very proud of what he's doing," Robert O'Farrell said. "We miss him, of course, but he seems to be very happy."

What does the younger O'Farrell miss most? Candy. And when his father visited, he made sure his son got an entire suitcase full of it.

This story has been posted in the following forums: : Headlines; Environment; COS - Madagascar