The spreading violence sent expats fleeing, with about 200, mostly American missionaries and Peace Corps workers queuing for seats on the daily flights to Miami 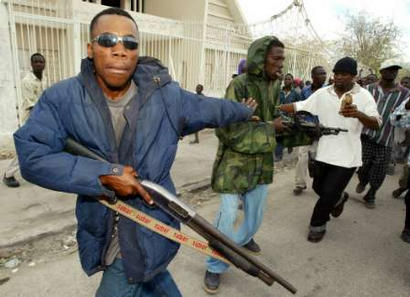 The spreading violence sent expats fleeing, with about 200, mostly American missionaries and Peace Corps workers queuing for seats on the daily flights to Miami

Haiti's anti-government militants - the Cannibal army - have reached the city of Gonaives. And as unrest ran through the streets of the capital, Port-au-Prince, Charles Laurence joined the rebel soldiers on their move south.

A teenager with a black ski mask over his face and the yellowed eyeballs of the marijuana smoker, Marc was looking the part. He was a young recruit of Haiti's rebel "Cannibal" army and he had been left in charge of the makeshift barricade of an old steel shipping container serving as the front line between the rebel-held city of Gonaives and Haiti's capital city 70 miles away.

He was in camouflage trousers and black T-shirt and in his left hand he clutched both his gun, a tiny .22mm pistol, and a cigarette, as he faced a jostling, shouting crowd intent on getting home.

"The people respect me because we will take Haiti back for them. If they try to stop the revolution, they know we will steal their lives in the night," he said. And then Marc - he gave no second name - leapt into the crowd, waving the pistol above his head.

The rebels who took Gonaives nearly two weeks ago - plunging long-troubled Haiti into its latest political crisis - had closed the city to the cars and trucks which might bring a government counter-attack. But now a Red Cross relief convoy carrying medical supplies and maize and at least 200 local Haitians was stranded on the rutted, collapsing road which still bears the grandly hopeful name of National Highway. The Haitians began to fight as they struggled to get donkeys, handcarts and motor scooters around the barricade.

Marc thrust his pistol into one man's face, and the crowd fell silent. Eyes bulged and breathing stopped in expectation of a crack-and-pop. But Marc backed away, the jam eased and the slow procession of carts and bundles resumed.

About 55 people are thought to have died in two weeks of upheaval since the unlikely coalition of the Cannibal militia and ex-army veterans attacked the police station in Gonaives and a string of other villages in the Haitian interior. In Hinche, the Monsters, a second rag-tag army spreading terror for the government, handed over their weapons to the rebels.

The battles were brief - the police in Belladere on the border with the Dominican Republic even gave away their furniture, cooking stove and keys when they heard that the mob was on its way, leaving nothing to loot, and disappeared into the night. But the rebels now control the northern half of Haiti with the town of Hinche at its centre, and have the city of Cap-Haitian, the second largest in the country, under siege and accessible only by sea.

The Cannibals began as a street gang recruited and armed to support President Jean-Bertrand Aristide. Restored to power 10 years ago by American marines after a coup, President Aristide now stands accused of rigging parliamentary elections, terrorising the small but wealthy middle class, and seizing dictatorial powers. He is protected by 4,000 "policemen", and they are almost all in the capital, Port-au-Prince. Haiti has no conventional army - President Aristide disbanded it after returning to power, fearing another coup.

"Aristide must go now, or we will come to his house and kill him," said Marc. "It is he who betrayed us with broken promises, not us who betray him."

The scene at the barricade was a snapshot of the chaos that long ago engulfed Haiti. The forests are gone for logging and firewood, the soil is eroded to a ghostly white dust, and life expectancy has fallen from 53 to 49 since the turn of the millennium.

There was fear on the road to Gonaives. But mostly there was simply chaos. Estimates of the number of rebels there vary wildly, from as few as 50 armed men to 5,000, outnumbering President Aristide's police. Counts brought back by relief workers as well as the claims of the rebels themselves suggest that the true figure is about 200 men and boys.

Blood has been spilled, but as always in Haiti since the days of "Papa Doc" Duvalier and his Tontons Macoutes, the theatre of war has more to do with theatre than war. In the land long ago enchanted by its voodoo, that uniquely powerful blend of African animism and Roman Catholicism, it is the fear that counts for most.

Two miles beyond the barricade, Marc's former leader, Winter Etienne, and his two-dozen comrades in arms were learning that their Cannibal army no longer existed. There had already been attempts to change its name to the less-laughable Revolutionary Artiboinite Resistance Front - "We are educated men who have been to school, and the Cannibals were just for effect with the kids," explained Etienne in an interview through the window of his crumpled Jeep - but now they were being absorbed into a new army.

Guy Philippe - the self-proclaimed leader of anti-government forces, once the police chief of Cap-Haitian and an Aristide crony who fled the country in 2000 accused of multimillion dollar drug dealing and plotting a coup - strode up to a rickety podium in the town square at Gonaives and announced the change.

In front of a crowd of perhaps 500 men and women, and dapper in clean fatigues and polished boots, a gold chain around his neck, Philippe declared that the rebels were now one army, the National Revolutionary Front for the Liberation of Haiti, and that he was its commander. Then he strode triumphantly back down the main street to the house by the old fishing harbour he had commandeered as his headquarters.

How many men did Philippe have? "We have everyone, all of Haiti, because we have come to free them and they are all with us," he replied, flashing white teeth in a brilliant smile.

Beside the dirt road to the harbour even the open sewers were collapsing, falling mud brick by mud brick into their own stagnant effluent. Here and there, women squatted over small tin barbecue braziers. Two recruits - one armed with an old gun and a bottle of rum, the other with a .38 revolver with empty chambers - pushed and shoved in a fight over whether one had been a Lavaliste, an Aristide supporter, and was a spy.

Two guards in full combat fatigues propped up the crumbling wall of Philippe's new headquarters. They were both ex-army, they explained, and had been out of work since President Aristide disbanded them. They had dug out their weapons from hiding places and made their way to Gonaives when they heard on the radio that Philippe had reached the town from his exile over the border in the Dominican Republic.

"In our minds we have trained for this moment for four years - Aristide took our jobs and left our families starving, and now we are going to chase him away and have our jobs back," explained Albert Jean Francois.

The revolutionary army at its headquarters so far boasts about 100 men, and perhaps another 50 Cannibals. Philippe, however, settled down on an old sofa with a bottle of Prestige lager, like a man certain of victory, and issued a deadline for President Aristide to quit office and accept a fair trial.

We were sitting in a voodoo chapel by the harbour, where the skeletons of old wooden fishing boats baked in the afternoon sun, and domesticated jungle pigs, the cochon blanc treasured for feast days and celebrations, rooted around in the sand. Three larger-than-lifesize bronze statues of heroes of the slave rebellion, black men in elaborate Napoleonic garb, stood improbable guard outside.

"We will march on the Presidential Palace," said Philippe. "I will not accept a divide in the country where we control the north and Aristide the capital.

"We do not want blood. It is up to Aristide. There will be civil war. How many people have to die?"
He denied that he had assassinated opponents while a police commissioner, that he had been a drug-runner and had millions of dollars in off-shore bank accounts. "Look where we are living. Do we look like rich men?" he asked. He displayed his watch: "Not a Rolex. It cost $50! You can look in all the banks of the world, but you will not find any money of mine, because I am not rich."

Philippe crossed back into Haiti with Louis Jodel Chamberlain, who led the FRAPH government goon squads under General Raoul Cedras when he staged his coup against Aristide in 1992. Philippe is now in charge of Hinche - the inland town which is the rebels' second biggest prize - but is widely suspected of multiple human rights violations, torture and murder. Between them, they have taken charge of what seems to have been a spontaneous rebellion in the country towns, frustrated and hungry after years of empty promises from the president who had promised them salvation.

Although hopes for a compromise were slight, Aristide held meetings yesterday with French, Caribbean and Canadian diplomats led by the American special envoy, Roger Noriega. The deal they offered was for Aristide to stay on to the end of his term in 2006, but to share power with a "neutral" prime minister and an appointed government while an electoral commission organises new elections. He has refused similar plans before.

The spreading violence sent expats fleeing, with about 200, mostly American missionaries and Peace Corps workers queuing for seats on the daily flights to Miami.

There was fresh blood in the streets of Port-au-Prince for the first time in a week as students marched against Aristide and were met by a gang of his Lavalas family thugs armed with rocks, machetes and a shotgun. Fourteen were injured, and it became clear that journalists had been added to the list of targets. A Haitian radio journalist was shot in the back, and a Spanish television cameraman was wounded in the head by a blow from a machete.

In the bush, there were signs of emerging rivalries as rebel leaders settled into new turf. While Philippe declared himself head of the rebel army, Buter Metayer, the Cannibal leader who seized Hinche, dressed up in a stained white suit and sunglasses and told a visiting television crew that he was now the president of a new Haitian Republic.

Back at the bar at Oloffson's Grand Hotel, the old gingerbread inn made famous by Graham Greene's defining novel of the Papa Doc era of voodoo terror, The Comedians, the foreign aid workers and the dwindling colony of expats shook their heads and agreed that for all his boasts, Philippe would not be at the gates of Aristide's palace any time soon.

There is simply no evidence that he has the arms or the men to take on even an "army" of 4,000 policemen, armed with nothing heavier than a few machineguns.

"But something has to change," said Andre Apaid, an American-born Haitian who has come home to run a business. He has become a leading opposition figure, although he has no political party, simply because he has broken with old caste rivalries to demand help and fairness for Haiti's starving masses. "In spite of the attempts at division, people are more together than ever. We are all saying that the level of suffering of the people is unacceptable."

At the bar, the lights flickered as the city went dark. The dogs began their late-night howls. The barman mixed another rum punch.

This story has been posted in the following forums: : Headlines; COS - Haiti; Safety and Security of Volunteers