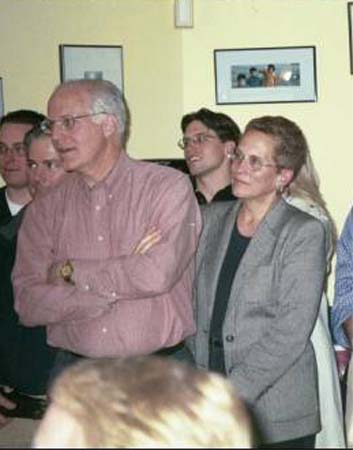 The sun set over the U.S. Capitol more than an hour ago; and House members, including U.S. Rep. Christopher Shays, R-4, are just making their way to the floor for the first vote of the day.

Shays joins his colleagues on the floor for several votes on procedural matters and the members begin clearing the floor by 7:06 p.m.

The roll call votes are just the tip of the iceberg for Shays on a day packed with meetings, speeches and events that began an hour before sunrise at his three-story townhouse, that he shares with his wife, Betsi, in the Southwest section of Washington, D.C.

Most mornings Shays is out the door by 7 a.m., as is Betsi, who bicycles the 2.5 miles to work at Peace Corps headquarters on K Street in the northwest section of the city.

This particular morning starts around 6 a.m. for Shays.

He loads up a gym bag with a foot-thick pile of paperwork and files in manila folders or neatly placed in three-ring binders.

He pops into his garage and grabs a Slim-Fast from a small refrigerator, stocked with cans of the diet supplement and bottles of Gatorade, searches frantically for a few moments for his keys and heads out to his black Jeep Grand Cherokee.

He drives to the Rayburn House Office Building garage and heads to the members' gym to shower and shave. Some days, he runs first.

Shays was elected to Congress in 1987 and has commuted between Connecticut and Capitol Hill ever since.

He used to sleep at his aunt and uncle's house in Arlington, Va., until they moved away around 1990. Then Shays just slept in his office in the Cannon House Office Building during the week.

Betsi Shays taught at a school in New Canaan, Conn., and the couple's home was in Stamford, Conn., with their daughter, Jeramy. They later bought a house in Bridgeport, which they share with Shays' mother, Peggy.

In 1998, Betsi Shays was hired as director of the Peace Corps' Coverdell World Wise Schools Program in Washington and has since become director of Domestic Programs.

The family began renting an apartment on Capitol Hill and commuted back to the 4th District on weekends. By that time, their daughter Jeramy was attending Principia College near St. Louis, a school for Christian Scientists from which her father graduated in 1968.

Jeramy now has her own apartment in Washington and works for the Environmental Law Institute. She was recently accepted at the Vermont School of Law.

When rents began to climb on Capitol Hill, the Shays family went hunting for a second home.

The couple purchased their three-story townhouse in Washington for $270,000 in 2001, according to real estate records.

The brick building, painted white, was built in 1961 after the city bulldozed most of the Southwest section of the city in the name of redevelopment.

"Southwest, we think, is a wonderful part of the city. It doesn't have the ambiance but it is close to the Capitol and I can bike to work," Betsi Shays says.

Christopher Shays agrees that Southwest is convenient, even if it does lack the restaurants and cafes of trendier neighborhoods.

"It is four and a half minutes from my office

six minutes with the lights

eight minutes from the airport and four blocks from the [National] Mall," he says.

The couple, who met in high school, rarely dine out at restaurants or do much outside of work. He typically brings home a large pile of reports, testimony, letters and e-mails to review after spending 12 to 15 hours on the go.

"We mostly work here, so there is not room for a lot of ambiance, and we are not here on the weekends. We want to get home to Connecticut," Betsi Shays says.

The couple has not had a real vacation since before Sept. 11, 2001. They are members of the Black Rock Yacht Club in Bridgeport but have only been there five times in the last two years.

"I went sailing once and didn't play tennis at all," Shays says. "It represents more of a dream than a current reality."

Still, the couple insists they are not complaining. They love their careers.

At first Shays was a little nervous about moving across the street from Washington's Greenleaf Gardens low-income housing development, but it has undergone renovations and crime is down from a decade ago.

Shays was attracted to the townhouse's large banks of windows, front and back, which let plenty of light into the six-room house. He also loves the back yard with its stand of tall trees.

On the first floor of the townhouse is a garage where Shays keeps two bicycles. His black Grand Cherokee stays outside. There is also a narrow hallway and small living room in the back that is rarely used. A couch there has pillows with "Peanuts" characters celebrating his campaign victories and on the wall are political photographs and a framed copy of the state's coat of arms with the motto "Qui Transtulit Sustinet," which translates to: He who transplanted still sustains.

The walls of the 1,727-square-foot home are painted bright yellow with white trim. Along the first-floor hallway and stairway above are family photographs, including a bridal picture of Betsi and one of Shays holding Jeramy when she was just a toddler.

The second-floor has a dining room, a galley kitchen and a living room that is decorated with several pieces of furniture, including a wood armoire, purchased from "Prince of Wales," an antique store in Westport, Conn. There are bedrooms and a full bath on the top floor.

"It is wonderful to have a home of our own here," Betsi Shays says. "Connecticut is home with a capital 'H' but for many years Chris was commuting back and forth and I like seeing this guy."

Shays says that having two homes, and basically two jobs

means that some things just don't get done.

"Like curtains," he says, pointing to the bank of undressed windows in their townhouse.

First to the office

Shays is the first to arrive at his office in the House Longworth Office Building. He goes to his large wooden desk and unloads the paperwork from his gym bag.

There are already other piles of documents on his desk left by his staff and staff from his committees. He serves on four committees

"I have 18 people producing work for me," he says.

Shays likes to have his papers in three-ring binders to keep them in order. To help manage his and his staff's time, Shays insists that everyone carry Franklin Planners. The planners are made by Franklin Covey, a company based in Salt Lake City. The company's vice chairman, Steven Covey, a devout Mormon, is the author of "The Seven Habits of Highly Effective People."

Aside from his office work, Shays has an inch-thick manila folder of financial documents from his daughter. She is looking for some financial assistance to defray the cost of law school.

Shays explains that the mornings are typically a "wonderful time to get things done." He has an office rule that nothing should be scheduled for him before 8:30 a.m.

That rule is broken this morning. Shays heads to the Pentagon for breakfast with Deputy Secretary of Defense Paul Wolfowitz and Rep. Frank Wolf, R-Va. Shays brings along Nicholas Palarino, a senior policy analyst on his National Security Subcommittee and a member of the Vietnam Helicopter Pilots Association.

Shays and Wolf want to discuss ideas they came up with after they visited Iraq in December. "We encouraged him to meet with some of the military that is critical of Iraq and NGOs [non-governmental organizations providing humanitarian relief] to get other perspectives," Shays says.

Returning to his office around 9 a.m., Shays sits down with a dozen members of his legislative staff, plus several district workers on a conference phone, to discuss events coming up in the next few weeks.

Between the individual staff updates, Shays offers a couple of inspirational quotes for them to ponder, including one culled from his Franklin planner: "Life is now in session, are you present?"

After his staff departs, Shays meets with Michael Stricoff, a high school student from Monroe, who is participating in the Presidential Classroom program.

Stricoff asks Shays his opinion of the scandal developing around Gov. John G. Rowland back in Connecticut.

The meeting with Stricoff is interrupted by a telephone call from his wife, Betsi.

A longtime friend of Shays is in town and Betsi Shays wants to know when and where to plan for dinner. Shays suggests that since this is a special occasion they should go to the Capital Grille. Reservations are made for 8 p.m., when voting in the House should be over, leaving him time to stop at a Save AmeriCorps Coalition reception at the U.S. Botanical Garden Conservatory down the hill from the Capitol.

Shays says that this will be the second time since he has been in Washington that he has dined at the Capital Grille, well known as a haunt of political bigwigs on Pennsylvania Avenue.

Shays takes a photograph with Stricoff, smiling and saying "sunny" as the camera flashes.

Shays is also briefed on a forum he will participate in later in the month on the impact of a cyber and physical attack on financial sector infrastructure.

Shays then meets with Republican staff from the House Budget Committee and with Mike Lubell, a lobbyist for the National Science Board, Doug Comer of Intel, and Bob Richardson of Cornell University. They are concerned that the federal government is not spending enough on basic scientific research.

Richardson won the 1996 Nobel Prize in physics for his discovery of superfluidity in helium-3.

"It was the biggest surprise of my life," Richardson tells Shays.

The physicist goes on to explain that basic science research is moving offshore to countries like Australia, India and the United Kingdom. The loss could cost the United States its next generation of inventors and, with it, the innovative edge that has kept our economic engine chugging.

Shays gives him a good-natured pat on the head.

The meeting over, Shays walks to the Library of Congress to speak at a "health and safety" conference of the Office of Compliance.

There he stresses his support for legislation that requires Congress to live by the laws it passes for others.

He then catches a ride from his scheduler, Diana White, to the Hyatt Regency hotel, just northwest of the Capitol, to speak at a luncheon meeting of the American Federation of Government Employees.

Danielle Rosengarten, his legislative assistant, informs Shays that the federal labor union gave him a "zero" on their legislative scorecard this year. He opposed them on all their key votes last year and voted with them only once in the 107th Congress.

"It's probably not going to be long," Shays tells her, referring to his address to the group.

After a brief speech, in which he acknowledges his opposition to most of their employee issues, Shays sits down at a table and talks to individual members of the group for about a half-hour.

Shays stops in the cafeteria of the Rayburn House Office Building for a quick sandwich before a hearing of his National Security Subcommittee begins. The hearing was called to examine the role public diplomacy, radio, television and arts has had in convincing people in the Middle East that the war on terrorism is not a war on Islam.

Shays later meets with Pitney Bowes CEO Michael J. Critelli, then votes on several procedural matters in the House, stops at the AmeriCorps reception, and has dinner with his wife and friend.

It's been a typical day in the life of this congressman.

This story has been posted in the following forums: : Headlines; COS - Fiji; Congress