College of Charleston's President Lee Higdon began life as an American worker in the landlocked country of Malawi in southern Africa, teaching English and history as a Peace Corps volunteer 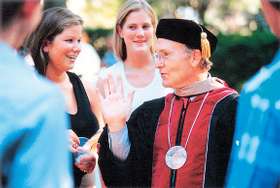 College of Charleston's President Lee Higdon began life as an American worker in the landlocked country of Malawi in southern Africa, teaching English and history as a Peace Corps volunteer


e-mail this story to a friend
There is no Ph.D. suffix to Lee Higdon's name, but for most of his career, the College of Charleston's president was doctor of the deal.

"Unusual," Higdon said, his terse description of the path he took to his "dream job" of running the 234-year-old college. His experiences give the school a different kind of leader with a different perspective on training men and women for careers.

He began life as an American worker in the landlocked country of Malawi in southern Africa, teaching English and history as a Peace Corps volunteer. Next stop: Wall Street, after a detour at the University of Chicago for an MBA.

Higdon launched his business career at Salomon Brothers in 1973 and spent the next 20 years there, rising to vice chairman and member of the executive committee while serving as investment banker for clients like IBM, Chrysler and Time Inc. Four Higdon-engineered transactions were named "Deals of the Year" by "Institutional Investor," a trade publication.

He helped guide Time Inc. through a large equity offering and held Chrysler's hand when it merged with American Motors in 1987, a deal that put the Jeep brand under Chrysler's umbrella. When Higdon left Salomon Brothers, he was managing its global banking operations.

Higdon wasn't really looking to leave Wall Street in 1993, but while serving on the board of trustees of Georgetown University, his alma mater, the dean of the school's business school told him the University of Virginia was beginning the search for a dean of its Darden Graduate School of Business Administration.

"I didn't interview anywhere else," Higdon said. "The more I went through the process, which took about six months, the more I felt that at that stage of my life and career, it was something I wanted to do. The University of Virginia was considering people who had what they called nontraditional experience - business experience - and I fit the bill."

He knew immediately he had made the right decision.

"I was involved with a very large operation at Salomon Brothers," he said. "It was global, it was big, it was complex. But nothing is as complex as an academic enterprise. You're dealing with a different culture than you are in the for-profit world."

"It was not a traditional business structure there. It was a company that operated very much like a partnership," he said. "I was not an imperial CEO. I was a partner in an investment banking firm."

Eight years later, and with a resume that had grown to include the presidency of Babson College in Wellesley, Mass., Higdon made a big impression on the College of Charleston's board of trustees, which was searching for a president to replace the retiring Alex Sanders.

"Lee clearly was a person with a lot of energy and vision," said Robert S. "Tex" Small Jr., the Greenville developer who is chairman of the College of Charleston's board of trustees. "That came across during our interviews with him.

"He wasn't going to be someone who would sit on his hands and be a caretaker. He took the strategic plan we had prepared and told us how he would build upon it. Lee had been a very successful businessman, and we felt he would bring that perspective and his organizational skills to the College of Charleston. He was clearly the right person for the job."

Small said the College of Charleston got what it bargained for with Higdon, and more.

"Lee is an excellent communicator, who likes to communicate on all subjects and bring consensus on all issues," he said. "He is very inclusive. He's not out there making decisions on his own. The board likes that because we feel very informed. The faculty likes that, too."

Virginia Friedman, a vice president at the College of Charleston, said Higdon is a team builder.

"In his office, he has these little souvenirs of deals that he put together when he was at Salomon Brothers," she said. "He saw opportunities to put people together, and that's what he does for us here. He brings that mindset to us, that we see opportunities to work with this school or this department."

Higdon said it is merely his belief that "it's less about the president's leadership but the leadership of the group. It's the team that moves the institution forward."

Higdon brought something else to the College of Charleston: It is a liberal arts institution, and he had both a liberal arts education - with a history degree - and a true belief that it is an excellent precursor to most any career.

Carol Hacker, dean of student affairs at Babson, said Higdon is "the epitome of undergraduate education. He's probably all the things we want our graduates to be in the end - a strong decision maker, a collaborator, a kidder who makes himself easy to approach and an entrepreneur."

He left both Virginia and Babson richer - literally. While Higdon was at Virginia, he led a fund-raising venture that raised more than $60 million for Darden, the largest campaign in school history, and the business school's endowment doubled.

Babson, a small business school that "The Financial Times" has ranked No. 1 for entrepreneurship, likewise saw its endowment double during Higdon's stewardship. When he left for the College of Charleston, Babson named its Women's Leadership Scholarship Program and its Business Development Center after Higdon.

Higdon said he "knew about the College of Charleston" when a search firm contacted him, but not much about it.

"I had been to Charleston, but not for any length of time," he said. "I had spent a good deal of time in Columbia because of clients there. I knew the College of Charleston had very strong academic programs. I had a positive impression, but it wasn't finely formed."

"You kind of have one view from the outside," he said. "But sometimes when I would get to know a company, they looked better from the outside than the inside. At the College of Charleston, it looked better the more I learned about it. Not only did I sense the opportunity here, but I sensed the willingness of the people here to work together to move the institution forward.

"The core foundation was in place. It was and is a very strong institution financially, with a very good faculty. It attracted very strong students. It just seemed like a strong match."

Higdon said his whole life "has been a case study of a very dramatic shift. How many investment bankers do you see who become presidents of a very large liberal arts college? It just doesn't happen very often. And it happened for me, in large part, because of the education I got at Georgetown. It taught me some very fundamental things."

He said his deeply rooted beliefs and the College of Charleston's mission fit hand-in-hand.

"If business is where you want to go, I have no problem with a business degree," he said. "It's just that we feel so passionately and strongly about the liberal arts. If you look at the CEOs of today, the vast majority of them were educated in the liberal arts.

"For many people, the focus and intent of an education is the immediate connection between the program and the job. But this generation is going to change jobs and careers at a rate we've never seen before."

With a liberal arts education, the person "learns how to learn," Higdon said, learns "how to think at a higher level, learns how to deal with complexity and ambiguity."

The school of business and economics is no small part of the College of Charleston. One fifth of its graduating class each year earns a degree in accounting, business administration, economics or international business. Almost one third of its 10,000-plus undergraduates take classes in the business school each year.

The College of Charleston estimates that approximately 1,000 Upstate students are presently enrolled, and it wants to attract more. It recently hired a full-time recruiter for the Upstate, with an office in Greenville.

"It'll take an active program over a period of time," to create greater interest in the College of Charleston among high school students, Small said.

"No. 2, you've got to be up here more often and involved more in the Upstate," he said.

To that end, the school is planning to send deans, faculty and staff to Greenville next month to meet with Upstate students who have been accepted for the 2004-05 term.

The business school's curriculum deals heavily with topics such as leadership, ethics and entrepreneurial thinking, an area of particular interest to Greenville's Jack Tate Jr., who parlayed a $1,000 loan into the Baby Superstore chain, which he later sold to Toys "R" Us.

Tate gave the College of Charleston $1.5 million in 1997 to complete a building the school named in his honor - the Tate Center for Entrepreneurship.

"There is a natural connection between the liberal arts and the entrepreneurial mindset," Higdon said, adding that it is an especially timely connection because of the state's changing economy.

"What does every successful entrepreneur have?" he said. "They have passion. They let nothing stand in their way. An entrepreneur has to take risks, has to recognize opportunity, marshal resources and execute a plan. A good liberal arts education has many of those attributes."

Small said liberal arts "allows you to move in your career. It gives you a skill set that transfers anywhere, to any business environment."

Higdon said what he is seeing in South Carolina's business environment - in the country's - is rapid change that is challenging colleges and universities to educate the work force of the future.

"We have to make sure our students are graduating with the skills that are necessary to be successful in this 21st century economy," he said. "They need critical thinking skills so that they are able to synthesize and analyze.

"What has happened not only in manufacturing, but also in the service industry, is that if all you're competing for is cost, business is increasingly going offshore. I have been in many auto plants around the world - in Europe, the U.S. and particularly Japan. What you see is that these facilities are being run with increasingly sophisticated technology. In the service industry, we're seeing that companies under pressure are outsourcing or moving those capabilities offshore."

For the American worker, he said, that means the key to success is "your ability to relearn, your ability to retool yourself, because I don't think anybody can completely say with any conviction that their job, any particular job, is going to be here five, 10 or 20 years down the line."

This story has been posted in the following forums: : Headlines; COS - Malawi; University Administration