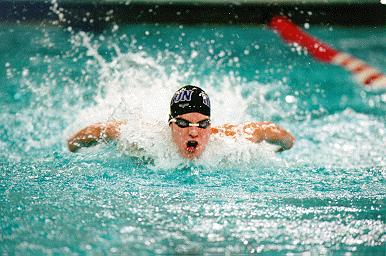 Denny Hill never will forget the day he visited Eric Troesch in his University of Michigan hospital room.

It was Nov. 17, 2001. Hill and his wife, Liz, had come with the state championship trophy that the girls team had won earlier in the day - a gift he would leave overnight with Troesch, a one-time Pioneer High swimmer who had just suffered a serious spinal cord injury in New York City.

Greeting his bedridden former charge, Hill shook the motionless Troesch's hand. And then, without thinking, he let go.

The hand went limp and fell off the side of the bed.

Almost exactly a year later, those tears of sadness were replaced by tears of joy. Not just because Pioneer won its third straight state championship on Nov. 23, 2002. But among those slapping backs, jumping in the pool and- yes - even shaking hands at the Eastern Michigan University pool was one of Hill's assistant coaches.

This is his story.

In the fall of 2001, Eric Troesch was well on his way to a lengthy career as a high school math teacher. Before that, there had been four years on the Pioneer swim team, where he was a co-captain and one of the state's top sprint freestylers. Then came the University of Wisconsin, where he swam for the Badgers for three years and graduated with a degree in secondary math education. After that, it was a two-year stint in Papua-New Guinea as a Peace Corps volunteer. And finally two years at Columbia University's Teachers College, where he received his master's degree.

That summer, he had accepted a job teaching math at Brooklyn Tech, a 4,000-student school in the lower part of the New York City borough.

"He was having a great time," said Will Hart, Troesch's best friend, former teammate and current Pioneer High water polo coach. "Life was good for him. And then life changed drastically for him in one day."

That day would be Nov. 5, 2001. After the school day ended, Troesch mounted his bike and started pedaling to his apartment along a moderately busy street. Without signaling, a car in front of him took a sudden left. Troesch jammed on his brakes, but not soon enough. He hit the side of the car, somersaulted over its hood and landed headfirst on the asphalt. Were it not for his helmet, which sustained major damage, Troesch probably would have died instantly.

The car zoomed away, leaving Troesch supine on the pavement. He had a cut on his right hand from his hard landing. But otherwise, he felt no pain. As a matter of fact, he felt nothing. And, with a rising sense of alarm, he realized he couldn't move.

"I was terrified," Troesch said. "I was too scared to think about the consequences of what just happened."

Rushed to a nearby hospital, Troesch underwent a CAT scan and MRI. The diagnosis: Two of the upper vertebrae in his spinal column had been fractured. The prognosis:unclear. Troesch underwent an immediate spinal fusion and was sent to intensive care.

On the third day after his operation, after intense effort, he was able to move his right big toe. Not much. But enough for a wave of relief to pass through Troesch's otherwise paralyzed body.

"I was elated," he said. "In my view, if I could get one of them moving, all the others would be moving soon."

On Nov. 17, he was airlifted by Survival Flight to the University of Michigan Medical Center. The question of whether Eric Troesch would ever move his other toes, let alone move any other parts of his body, would have to be answered in Ann Arbor.

Adding to the confusion, Troesch's own doctors weren't exactly a fount of knowledge.

That's because spinal injuries remain one of the big mysteries of medical science. Some people with upper spinal injuries never walk again. Others go on to live near-normal lives.

Almost every question that Troesch and his family posed - Will Eric get better? Will he ever walk again? What does it mean if he can't move his arm? - were met with the equivalent of shrugs.

"I don't think anybody wanted to say," said his mother, Linda, a registered nurse who teaches health science technology classes at Huron High School. "And I'm certainly glad they didn't."

That's because Eric Troesch didn't need to hear any more bad news. Though he could move many of his extremities, ordinary life had become a struggle. A mechanical lift was needed to pick him up out of his wheelchair and place him in bed. His legs, once powerful from years of swimming and biking, were withering from disuse. He also couldn't talk normally. For the spinal fusion, Doctors had gone through his throat, which left Troesch rasping out words.

"It's almost like you tell yourself 'I can't believe it's happening,' " Troesch said. "But it really is."

Yet, under the watchful eyes of his doctors, nurses and therapists, Troesch made progress. Incremental progress, but progress nonetheless. Every day, a new part of Troesch's body seemed to show movement. Sometimes, the movement would be something as simple as moving his hands back and forth.

"All kinds of triumphs had us in tears," said his father, Armin, a professor at U-M's engineering school.

On the evening of Dec. 17, exactly a month after his arrival, Eric's physical therapist told Linda Troesch to bring a camera to the hospital the next day.

Eric Troesch received no advance warning. Instead, his physical therapist simply wheeled him to a rehabilitation room on Dec. 18. That's where braces - similar to the ones seen in the early part of the film "Forrest Gump" -were strapped to his legs and he was lifted out of his chair to a 13-foot walking area flanked by two railings. Troesch made it across the area.

Not just once. But four times.

"It was definitely one of the best days of my life," he said. "It was a turning point. The dream could be realized. I could walk again."

From that moment on, Troesch's recovery seemed to take steps that were as giant as the ones he took that first day. A week and a half after that milestone, he was able to get around the physical therapy room with a walker. And on Jan. 18, 2002, the day of his discharge from the hospital, he could walk - albeit very, very slowly - using two canes.

Troesch was told by his doctors that his rapid recovery was due to the way his nerve system reacted to the trauma sustained by his body. Initially impeded, the neurons responsible for directing movement had found new pathways to his brain.

The long walk back to normal might not be so long after all.

On his own two feet

A month or so after he left the hospital, Troesch ditched one of his canes. And a month after that, in a repeat of a scene that might have happened 28 years earlier, he took three unassisted steps toward his mother.

But this wasn't any uplifting movie scene.

Walking was one thing.

Sustaining the energy to walk was another. Every time, almost as quickly as he got up, Troesch had to sit down. Every step seemed to drain Troesch of what little energy he had. A walk to the kitchen would require four hours of recovery time. As quickly as he was progressing, life was still a struggle.

"The public perception is that six months later, it's all OK," he said. "But with nerve injuries and spinal cord injuries, it takes years to recover."

Troesch was aided immeasurably by the support of his family - and one special friend. Hart, whom he had met while both were swimming at the YMCA as middle schoolers, was a constant presence. By Troesch's own estimates, his former teammate visited him in the hospital 63 of the 66 days he stayed. And after the discharge, Hart continued to visit his friend, prodding him to take trips with him to University of Michigan basketball games and other events. Every time they went somewhere, Hart nudged Troesch to do more.

Then came May 2002. Hart's water polo team would be playing for the state championship at the Pioneer pool. You need to come, Hart said. So a friend from New York drove Troesch, who made one of his longest walks since the long accident, from the parking lot to the pool.

Among those astonished to see Troesch in attendance was Denny Hill, who had seen Troesch intermittently since that day of the limp handshake.

Back in the swim

Two months later, Hill had another reason to be excited. Troesch approached him and asked if he could be an assistant coach. Hill couldn't say yes fast enough.

Still, Troesch had some nagging doubts about whether he was ready for such a responsibility. Could he get to practice every day? What would the swimmers think of a coach who had to sit on a bench more than half the time? Could he accompany the swimmers downstairs to the weight room in Pioneer's basement - and then make it back upstairs without passing out from exhaustion?

Hart said he could tell right away that the job was exactly what Troesch needed.

"The friend that you knew was trapped inside was there again," he said. "You could see him going out and doing things, being sociable. It just helped him be more like his old self."

In March 2003, five months after he celebrated the state title with the rest of the Pioneers and 17 months after his head hit a Brooklyn street, Troesch got another opportunity. He was asked to be a long-term sub, teaching advanced math at Pioneer. It was a huge commitment: Four 50-minute classes a day. Again, the nagging doubts surfaced. But he did it anyway, even if it meant he had to sit down most of the time rather than stand at the blackboard.

"I was terrified going in," he said. "And I came out of it, thinking I can do it again."

Will he? That's still up in the air.

For certain, the 30-year-old Troesch is feeling better these days. He can stand through two full 500-yard freestyle heats, compared to when just one was a chore. He now is one of Hill's paid assistant coaches. And for more than a year, he's been swimming at both the Pioneer pool and the Washtenaw County Recreation Center.

But his legs "are still not where I'd like them to be." The rebirth of the old Eric Troesch is still "a slow, slow process," in his own words.

Hart said he doesn't expect his friend to launch the next phase of his life until he's all better.

"He's still working to get back to 100 percent," he said. "And I don't think he'll stop until he gets there.

This story has been posted in the following forums: : Headlines; COS - Papua New Guinea; Paralysis; Sports; Swimming; Disabilities

Hey Eric Troesch was my Maths teacher in 1997 at Bugandi Secondary School in Lae, PNG...I haven't had from him since than and I am shocked and happy to read about him in this article....I really would like to get in touch with him...would you be able to provide me with an email address that I can contact him on??? If possible my contact email is lazibugga@hotmail.com