Colleen Harden shares her experiences as a Peace Corps volunteer in Yeghegnadzor, Armenia, with the students at Elkhorn Elementary School in Stockton 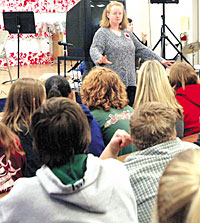 Colleen Harden shares her experiences as a Peace Corps volunteer in Yeghegnadzor, Armenia, with the students at Elkhorn Elementary School in Stockton

Part of the Peace Corps mission is to promote America's understanding of foreign cultures.

Colleen JoAn Hardin, a former Lodi resident, is doing exactly that as an English teacher in the Eastern European nation of Armenia.

Hardin, with her mother Betsy Fiske, and Elkhorn School teacher Sharie Goodfellow, have organized an international exchange for eighth grade students at Elkhorn. These students will keep correspondence with the Armenian students that Hardin teaches.

On Monday, Hardin introduced an excited group of eighth graders to the Armenian culture.

It's a very artistic and musical culture, Hardin said. Students don't attend school nearly as long as American students, she added, but until the tenth grade.

This comment was met with groans of envy from the youths seated in the Elkhorn multi-purpose room.

Armenia is a Christian country and was part of the former Union of Socialist Soviet Republics. The country has been ravaged by economic hardship, like many Eastern Bloc countries since the dissolution of the USSR, Hardin said.

The most obvious sign of this economic hardship in the small town of Yeghegnador, where Hardin volunteers, is the absence of males, she said. Many have left for Russia to find work.

Armenians are required to learn Russian in school, as well as choose another foreign language, Hardin said.

All Armenian men are required to serve in the military at the age of 18, Hardin added. Every time a young man would leave for military service, his family would have a large party for him. They would celebrate with cakes, drinks, songs and toasts, Hardin said.

Hardin has had some of her English students leave for the service, she said, pausing in the middle of her presentation -- clearly a little choked up.

"One of my students went off in December," Hardin continued, after a sip of water. "I arrived at (his party) at 5 p.m. and didn't leave until 1 a.m."

It's been difficult adjusting to a different culture and to the living conditions of a poor nation, Hardin said. She only has running water two hours a day. In the winter her heater only warms up one room at a time. She has to wash all her clothes by hand. She walks everywhere.

But the experience has been a positive one.

"One of my dreams, my personal dreams, is to travel around the world," Hardin said. She has traveled Europe and lived in England, now Armenia. She still wants to travel to South America, Africa, and "all over," she said.

The Peace Corps was helping her fulfill that dream, while also allowing her to help other people. She's also learned Armenian.

Hardin has lived in Armenia since June of 2002. She teaches students in grades fourth through eighth grade at a local school in the town, and students ages 16-25 at an educational non-government organization.

About 80 Elkhorn students will participate in the exchange. On Monday, students presented Hardin with a bag full of notes and gifts for their Armenian pen pals. Each student wrote a letter to an Armenian student and included a photo of themselves and some kind of present.

Most of the students seemed to be looking forward to the exchange and eager to learn about who they would be writing to.

"It's pretty exciting," said Jodi Cerney, who presented Hardin with a bouquet of flowers.
Contact reporter Alejandro Lazo at alexl@lodinews.com.

This story has been posted in the following forums: : Headlines; COS - Armenia; Third Goal; World Wise Schools