I had heard a lot about Kenya from my brother Albert Bird who worked there with the Peace Corps. 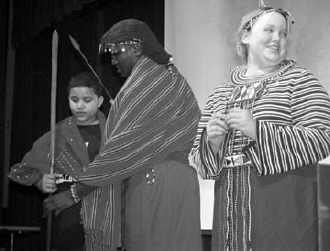 I had heard a lot about Kenya from my brother Albert Bird who worked there with the Peace Corps.

Masai warrior David Ntete leaned on his spear while visiting with South Valley Middle School seventh-graders.
He talked about his tribe in Kenya, expectations of a warrior and his education in the United States.

"It is a joy to present to kids," he said. "They are so innocent. You look at their faces and they want to learn. With adults, it is tougher. You have to break through some perceptions. Young people are going to be tomorrow's leaders. They need to learn about other cultures... appreciate them and understand them."

Ntete has been in the United States for more than two years. He studies business at Kansas City, Kan. Community College. In the fall, he said he plans to transfer to the College of the Ozarks to pursue a secondary education degree.

"I also want a master's degree in business or education," he said. "I want as much education as I can get."

Ntete presented his culture to the seventh-graders after being contacted by social studies teacher Charlie Lee.

"I am always looking for ways to expand our kids' knowledge," Lee said. "In Liberty, our kids are not exposed to this kind of diversity. I had heard a lot about Kenya from my brother Albert Bird who worked there with the Peace Corps. I figured we needed David to help round out Black History month too."

"I knew I had to have this opportunity for our young kids," Lee said. "I guess I wore Dr. Louis down because we started talking about dates. Dr. Louis' assistant even commented that we seem like part of the family after all the conversations. We just had to expose our students to the wonderful differences the world has to offer."

Ntete said there are 43 tribes and at least 43 languages in Kenya. He speaks English and four others.

"The Masai are nomads, moving to find better water and grass for our cows," he said. "We also sometimes have sheep, goats and donkeys for transportation."

Ntete's village in the Masailand is about 200 miles from the Kenyan capital city of Nairobi.

"The Masai are dependent on cattle," he said. "Cows give us the three basic things we need - food, shelter and clothing. The Masai also believe by right, all the cows in the world belong to them."

The Masai diet consists of milk and beef. The cow hide can be made into lightweight clothing, he said, and the cow dung is used as cement for their huts.

Huts are made of branches covered with dung and mud.

"If it rains hard, the women are putting dung and mud on the houses every couple days," he said.

He said Masai trade in cattle and beads.

"My culture is not one to push education," he said. "Only about 2 percent go to school and that is often provided by missionaries."

He said the Masai do believe in a higher being and that life is dictated by plans.

"We believe in doing good," he said.

He told the seventh-graders a village consists of seven to 10 families who unite.

"We are leaders in harmony," he said. "Children are raised by everyone. The care of children is never negative, but positive as we build self-esteem."

He said rites of passage occur for both boys and girls. Boys care for the cows, he said. Girls are educated by their mothers and grandmothers.

"Men are circumcised between 18 and 21," he said. "Men also become warriors to protect their community, not just their family. This is where we hunt a mature male lion."

Lee said he and the other social studies teachers Marie Goeglein and Amy Fagnani have given their pupils a mini-course on Africa, concentrating on Kenya.

"We have talked about what they value as wealth, respect for their elders and friendship," he said. "At this age level, seeing a Masai warrior will have an impact on them."

Story Source: Sun-News of the Northland

This story has been posted in the following forums: : Headlines; COS - Kenya; Black Issues