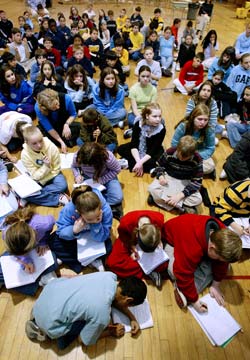 Students at the Rogers School in Fairhaven, above, listen to Sean Maloney, a Peace Corps volunteer serving in Benin, Africa, as he talks to them on a speaker phone. The students have been corresponding with him for about a year. Below is a photo of Mr. Maloney taken in the village of Kandi.

FAIRHAVEN -- Before Ann Ponte's nephew, Sean Maloney, left for a Peace Corps assignment in Africa in fall 2002, she invited him to speak to her fourth-grade class at the Rogers School.

"He was going really far away just to help some people he didn't know," student Matthew Wordell recalled. "I think that's pretty cool."

Soon the youngsters were sharing letters and e-mails with Mr. Maloney. And Matthew kept the correspondence circle going when he entered fifth grade.

On Tuesday, Matthew and his classmates heard Mr. Maloney's voice for the first time in more than a year during a 45-minute phone call from Benin, Africa, arranged by Mrs. Ponte in celebration of National Peace Corps Day.

More than 100 children sat on the gymnasium floor, listening to the voice of a 24-year-old man who was raised in their community, a young man they only knew through the words he had written to them about a small village called Kandi.

The children posed questions to the volunteer. They asked about the heat and transportation. They wondered about his adjustment to life in such a foreign environment.

Mr. Maloney responded with humor and sincerity through the static of thousands of miles.

"The hardest part was being the only white person and the only person who spoke English," Mr. Maloney admitted. "They speak 60 or 70 different languages."

Mr. Maloney explained that although French is Benin's primary language, it is spoken in many dialects.

"They're still getting used to me," he chuckled.

Mr. Maloney spoke of the village hospital and the lack of doctors to treat outbreaks of malaria. He described a life without electricity or indoor plumbing. He told stories about riding in station wagons called "bush taxis" with goats and chickens crowded among 15 people.

"I learned a lot about how it can be so hard living in different areas," Matthew said. "It's not easy. It's very hard."

At the end of the phone call, Mr. Maloney heard a special voice when his father, Mickey Maloney, approached the speaker phone.

"Be safe. Be careful," the father told his son. "Take care."

This story has been posted in the following forums: : Headlines; COS - Benin; Third Goal; World Wise Schools