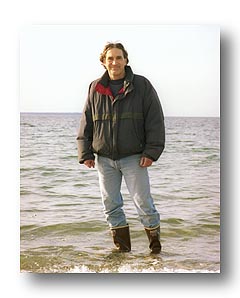 It was not X-rated, exactly, but things were heating up among the partners as expectant onlookers waited for the awesome and mysterious moment of release. The air was tropical, the water, 28 degrees Celsius - just about right for the occasion.

Only moments after the clouds of sperm and eggs swirled together in a shallow tray last Wednesday afternoon, 100 million larvae began life as oysters at the East Hampton Shellfish Hatchery on Fort Pond Bay in Montauk.

In the next room, algae of varying greens grew toward maturity in tall plastic columns; a smaller flagellate variety to feed the young larvae, larger diatoms to match their sharper appetites as they grow toward oysterhood. After nature's cull, the hatchery expects to produce one million oysters from the 100 million larvae that came to life that day.

It is not only oysters, clams, and scallops that the hatchery grows under the direction of John Aldred, but the algae that feed them. Mr. Aldred has been the hatchery's director since its creation in 1989.

"It's a plant," Mr. Aldred said, explaining how stock algae cultures are maintained and kept vital by continual growth in small glass containers.

The process starts when full-strength culture (supplied by aquaculture laboratories) is mixed into sterilized seawater at a ratio of five gallons of culture to 500 gallons of water. Not as many of the smaller-celled flagellates are required, so they finish their growth cycles in tall "organic reactors" called Kalwall tubes, 50 gallons at a time.

Both flagellates and diatom cells divide and take up nutrients until the colony matures to about a million cells per milliliter - a two or three-day process - at which point the diatoms are placed in a 1,000-gallon tank to supply hungry shellfish.

Until it's time to feed the shellfish, the culture waits in the wings, maturing in smaller containers, a portion transplanted (recycled) into new water and a different container at the height of its growing cycle. The hatchery's algae farming is about the same whether the crop is bound for clams, oysters, or scallops, although scallops tend to benefit more from algae with higher fat content.

Last Wednesday, the biological voyeurs included Mr. Aldred, Jennifer Gaites, a former intern who began working full time at the hatchery last fall, Barley Dunne, the rookie mariculturist, and Frank Quevedo, a five-year veteran who, like the others, toils at Fort Pond Bay, the hatchery's grow-out facilities at Gann Road on Three Mile Harbor, and in the north end of Napeague Harbor.

Mr. Aldred's interest in mariculture began at the University of Rhode Island, where he earned a degree in zoology. After graduating he did a one-year stint in the Peace Corps, stationed in India's Bihar state where he held workshops for science teachers. He returned to the States in 1972, worked the summer at Jones Beach as a lifeguard, and made the move to the East End when a guard position opened up at Hither Hills State Park.

From Hither Hills he got a job at the former New York Ocean Science Laboratory on Fort Pond Bay working with Bob Valenti, a marine biologist and aquaculturist. Mr. Aldred left the ocean science lab with Mr. Valenti when the latter founded the Multi-Aquaculture System company at Promised Land on Napeague in 1978. The plan was to grow pan-sized striped bass and blowfish for the market.

Opposition to the fish farm from fishermen came as a surprise, but was, and is, a reality that Mr. Aldred has faced ever since. Simply put, harvesters of striped bass in nature who had to live, at the time, with a 24-inch minimum size limit, did not care for the idea of competing with unregulated, pan-size (12-inch) bass in the marketplace.

Likewise, baymen and East Hampton Town trustees (overseers of common bottomland) have disapproved of using public bottomland for private shellfish farms, and so have monitored the hatchery's activities carefully.

Mr. Aldred left aquaculture in 1980 for a short career in cabinet making and working a small farm in Sag Harbor that belonged to his wife's family. In 1986, he joined East Hampton's Natural Resources Department.

Ironically, the hatchery grew out of the Multi-Aquaculture controversy over pan-sized striped bass, Mr. Aldred said, explaining that while the East Hampton Town Baymen's Association was opposed to farmed striped bass and to the use of public bottomland for private mariculture, the organization was not against public aquaculture/mariculture.

"There were a few collaborations between the baymen's association and the town, small seeding programs," Mr. Aldred said. The seed, in those cases, was purchased from hatcheries from away and broadcast into town waters. Mr. Aldred and others began to argue that a town hatchery would be able to grow its own shellfish seed more cost-effectively.

"The town's push for a hatchery continued," Mr. Aldred said, and then found its raison d'etre in the collapse of the East End's valuable scallop fishery due to the devastating brown algae blooms that began in 1985.

So catastrophic was the scallop die-off that then-Gov. Mario M. Cuomo created a relief fund to help out-of-work baymen. The relief included specific funding for the town hatchery, which came to be housed in one of the research center's buildings.

The complex of warehouses was originally built by the Navy during World War II as part of a torpedo testing station. The hatchery building was saved when the ocean science lab closed its doors and the other Navy warehouses were razed to make way for the Rough Rider Landing condominium complex.

In the beginning, the hatchery's mission was twofold, to try to help restart the Peconic Bay scallop population (yet to be realized), and to augment the natural hard clam resource, the "bread and butter" species in the absence of scallops.

Mr. Aldred said that, traditionally, oysters were a relatively small part of East Hampton's shellfish industry. "But we knew that oysters were the most viable for aquaculture success. It took some time, but people saw this," the hatchery director said.

Hatchery-grown oyster seed has been used in a successful pilot oyster farming project in Napeague Harbor, although the old fear, that public bottom would be taken over by private enterprise, has halted that effort.

As well as growing clams, oysters, and scallops, the hatchery participates in cooperative research programs. Last year, the hatchery worked on a seed clam planting experiment with the State Department of Environmental Conservation, the Cornell Cooperative Extension, and New York Sea Grant. Juvenile oyster disease was another research project undertaken with the Medical University of South Carolina. Q.P.X., another oyster disease, was studied in cooperation with the State University at Stony Brook. The hatchery made seed clams available to the East Hampton Town Trustees, and worked with East Hampton High School students on a clam and oyster brood stock project.

Mr. Aldred said that work had begun on the creation of a large-scale scallop spawner sanctuary near Shelter Island using federal grants, and in cooperation with Southampton College and the Nature Conservancy. The project will begin in earnest this year.

This week, while last week's oyster larvae were being culled with sieves for size, it was the clams' turn to spawn. In about five weeks, the healthiest of the oyster larvae will set on crushed oyster shells ("culch"). Two weeks later, they will be taken to the Gann Road grow-out tanks, then to Napeague Harbor when the water is warm enough, usually in June.

From early August through October, inch-and-a-quarter sized oysters will be broadcast in various town waters. Every 10 days to two weeks a new spawning cycle will begin; oysters and clams first, scallops later. The spawning will continue into June.

The numbers and locations of the hatchery's clam, oyster, and scallop seedings are available in its annual report, which can be found at the Natural Resources Department.

"The oysters and clams clearly have made a significant contribution to the harvest," the proud parent of millions of newborn oysters said. "It's worthwhile. People are making money off our production, and that was our initial mandate. Scallops have not returned in number, but we feel we have contributed to small harvests that have taken place. "I enjoy the work. It's gratifying."

This story has been posted in the following forums: : Headlines; COS - India; Fishing

Please tell me how I can visit a hatchery on LI. I would love to see the operation. Thanks, Dan Richter