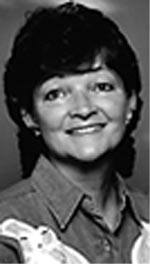 POCATELLO - In observance of International Women's Day on March 8, Nancy Lee Hendricks will discuss her experience with the holiday in the former Soviet Union.

According to a press release, because she is leaving that day to monitor presidential elections in Russia, her talk has been videotaped and will be shown at noon Monday in the Clearwater Room in the Idaho State University Pond Student Union Building. Sponsored by the Women's History Month Committee, the event is open and free to the public.

International Women's Day is recognized as a national holiday in many countries to celebrate the struggles and successes of women in gaining equality. The holiday has been developing since the beginning of the 20th century and now is a day to reflect and talk about women.

"Basic to all people is love of the women in their lives," Hendricks said.

While in Tajikistan, Hendricks experienced celebration of the holiday for the first time. The men of Tajikistan prepared dinner for the women and made congratulatory speeches about them.

"It was really touching. The men were really sincere," Hendricks said. "It's a great holiday."

Hendricks spent three years as a human rights monitor in the former Soviet Union. She also served there as a field officer with the Organization for Security and Cooperation in Europe, working to end human rights abuses against ethnic groups.

In 2001 Hendricks supervised the first poll elections in Kosovo. In 2002, she went to Afghanistan as part of a United Nations operation to help rebuild the government. Last year, she participated in the Frank Church Symposium at ISU.

In addition, Hendricks has volunteered with the Peace Corps in India, headed the Afghan Studies Committee and the International American Women's Association in Kabul, Afghanistan, and reorganized the AWA Library at the U.S. Embassy in New Delhi, India.

For more information, persons may contact the Anderson Center, 282-2805.

This story has been posted in the following forums: : Headlines; COS - India; Women's Issues

this is avinash vaidya from ahmedabad gujarat india...how r u? please let me know your email addres to my email rekhavinash@yahoo.com...

looking forward to meet you