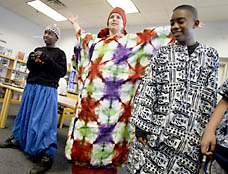 She explained that the colorful, ornate clothing was worn at religious functions in the mostly Muslim country while clothing worn by field workers was plainer and simpler.

It's just one of the many hands-on lessons students picked up about other cultures during a recent presentation by former Peace Corps volunteers.

Four former Peace Corps volunteers shared their stories and showed off native clothing and artifacts with dozens of students at the school last week.

''I really wanted to go and learn about another culture,'' said Tia Herring, a Spanish teacher at Head, who showed off a butterfly dance she learned while volunteering in Panama 1999-2001. ''It was a chance to give back.''

The volunteers said that spending two years in a developing country gave them a chance to learn about another culture and make things a little better for the natives. Some were tapped to teach computer skills or build libraries while others worked on basic health or farming issues.

Brad Herring, Tia's husband and a researcher at Vanderbilt University Medical Center, said he helped some Panama farmers with their crops.

Tony Garcia was in the Tonga, a string of South Pacific islands, 1992-1994. He said he learned the local language quickly while teaching natives how to use computers.

''You might be surprised how quickly you learn a language (of Tonga) because you have no choice,'' said Garcia, who is a digital mapper for a local company.

He showed off a war mask and explained that most of Tonga's residents were conservatives and Christians because of early missionaries who visited the region.

Students asked the volunteers about the fashion, food and marriage customs in the countries they visited. They wanted to know about how the volunteers traveled and lived while they were working for the Peace Corps.

Allyson Resha, 11, said she was surprised the volunteers would leave friends and families for two years to help out another country.

''A lot of people give up their time to go,'' said Veronica, also a sixth-grader. ''I'd do it, but I'd have to have one of my companions with me.''

She said the dilapidated conditions of some of the schools and homes made her grateful for what she had.

''We're always complaining about what we have, but we need to learn what others have and not take ours for granted.''

Claudette Riley covers education for The Tennessean. Contact her at 726-5964 or criley@tennessean.com.

This story has been posted in the following forums: : Headlines; COS - Senegal; Third Goal; World Wise Schools