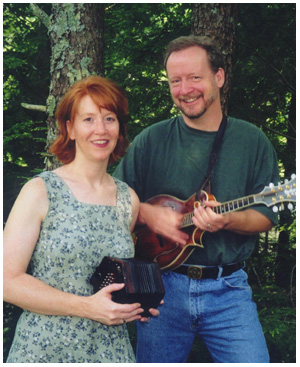 Can you play a 30's standard followed by a traditional tune from the 1800's and then launch into a song written just last week? Pamela Temple and Spencer Funk of the award-wining Cincinnati-based duo "wild carrot" can. Rooted in tradtional American music, their repertoire branches in diverse directions: jazz, blues, traditional folk songs, not-so-traditional folk songs, show tunes and originals. They do interesting arrangements with guitar, mandolin, concertina, penny whistle and bowed psaltery. Wild carrot's entertaining, honest and moving performances have something for everyone. Their growing reputation for high musicianship, professionalism and fun have made them a favortie on the national folk circuit. They have shared the stage with such internationally known acts as Fairport Convention, Stanley Jordan, Robin and Linda Williams, David Massengil, Bill Staines and Bill Morrissey.

Recently chosen as cultural ambasadors to Chile, South America by the US Emabssy in Santiago, they were finalists for the prestigious Kerrville New Folk contest (Kerrville, TX, 2000), winners of the Walnut Valley New Songs Showcase for Folk (Winfield, KS, 2000), and were named Best Folk Act by the Cincinnati Entertainment Awards. Wild carrot is currently participating in Muse Machine Adventure program, performing and giving songwriting workshops to elementary and middle school classes in 60 schools in the Dayton, OH area. They are on the Ohio Arts conuncil's Artists on Tour Fee Support Roster and are endorsing artists for John Pearse Strings.

Both from Cincinnati, Pamela and Spencer are rooted in traditional folk music but branch in diverse directions. With over 10 years of classical vocal training, Pamela has performed in many venues from coffeehouses to opera houses. Her experience as a Peace Corps volunteer in Costa Rica helped her develop an honest and intelligent song-writing style. Spencer has always been drawn to fingerstyle guitar but has studied and performed many styles including jazz, blues, and classical for over 30 years. He has been in demand as a side-man over the years and teaches guitar, mandolin, banjo and bass. Pamela and Spencer met back in 1991 at the then 30+-year-old Leo Coffeehouse when he was managing the place and she was singing at an open mic. After a few years they decided to join forces and as their musical relationship took root so did their personal relationship and they're still growing. With any luck both will continue long after people stop asking, "Is the name wild carrot a reference to her hair?"

What's in a name?

So, where did we get the name "wild carrot'? A wild carrot is the same as Queen Anne's lace. Our music has been described as being rooted in the solid earth of tradition, while displaying a delicate musical intricacy, like the flower of Queen Anne's lace.


Performance Highlights
(A Sampling of Where We've Been)


What people are saying:


"You can't just have a taste of wild carrot. Slowly savor their fine contemporary folk rooted in tradition and know you'll be coming back again and again." SingOut! Magazine, Winter 2004

"Tasteful, creative playing, lovely melodies, and beautiful singing voices are the hallmarks of this duo. As good a straight-ahead folk group as you'll hear."
Folk Alliance

"This guy-and-gal duo from Cincinnati tread the well-worn byways of acoustic folk but with an omnipresent eye toward strong songwriting and rich harmonic balance. Stitched out of gentle acoustic guitar play and a nicely checked vocal fabric, the two never stray far from traditional folk music, but their songs are impressive..."
Todd Bowman, Creative Loafing

"...There is a seamless wholeness to wild carrot that goes beyond the ordinary summing of parts and into the realm
of special magic..."John Krehbiel, Folk Notes

"It's obvious even on a first listening that Pamela Temple and Spencer Funk are first-rate musicians. Pamela's pure, clear voice swoops and soars, taking a lyric (and an audience) everywhere it's supposed to go - and to some surprising new places as well. Spencer's guitar work is solid where needed and adds interesting musical embellishments...They have found that groove where their abilities work together in a way that makes their performances special."
Eric Hansen, President, Cincinnati Balladeers

This story has been posted in the following forums: : Headlines; COS - Costa Rica; Music