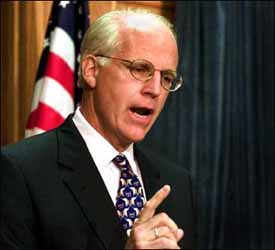 Bush administration budget cuts will hurt businesses and transportation in remote areas of Hawaii, says Rep. Ed Case, whose district, the Hawaii 2nd, encompasses the northern part of Oahu and all the neighbor islands.

Case said this Wednesday before the House Budget Committee, then transmitted excerpts from his Capitol Hill testimony to home state media.

"I am very concerned with the cuts in the President's FY 2005 budget to the essential air service (EAS) program," said Case. "Due to their remoteness and isolation, the Second District communities of Kalaupapa, Hana, and Kamuela currently qualify for EAS. Kalaupapa on Molokai is the perfect example of the unique needs of my district."

For mainland readers, Kalaupapa is the Hansen's Disease colony on Molokai, Hana is a village on the remote eastern side of Maui, and Kamuela is the rural Parker Ranch territory on the northwestern quarter of the Big Island. All three have air service with small aircraft only because of federal subsidies.

The federal EAS program provides subsidies to ensure essential air service to many of the nation's rural communities and provided relief to small air operations that suffered financially following 9/11.

Kalaupapa's isolation "on a peninsula at the foot of some of the most spectacular sea cliffs in the world" also leaves the community without "roads, bridges, tunnels, or ferries linking this remote and isolated community to other islands or to the rest of Molokai," Case said.

Case's presence before the committee reminded other rural members of Congress that Hawaii has special needs as an archipelago state without all the surface options of rural locales on the mainland.

Case also urged the budget panel to reconsider cuts to the federal Microloan program. He noted the program "is designed to make loans to extremely small firms and entrepreneurs" which would not qualify for larger loans usually provided by the Small Business Administration.

"Hawaii has many extremely small and isolated communities that depend on microenterprises," said Case. "For example, the 7,800 residents of the Island of Molokai do not have any shopping malls or even fast-food restaurants. New small businesses on the island do not need the larger loans typically provided by other Small Business Administration assistance programs. In fact, the typical Microloan borrower would not qualify for a 7(a) SBA loan due to any number of reasons including lack of collateral and formal business training."

Case can probably count on at least one vote: the vice chairman of the House Budget Committee, Christopher Shays of Connecticut, revealed at the hearing that he trained in the Peace Corps on Molokai.

This story has been posted in the following forums: : Headlines; COS - Fiji; Congress; Air Pollution